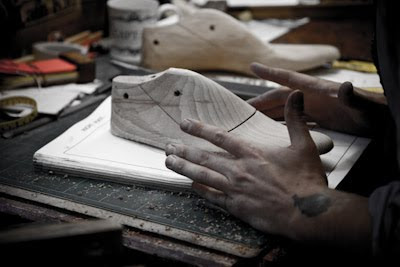 Continuing the lasting process of my bespoke shoes at GJ Cleverley from part 3 , with Teemu Leppanen

So first Teemu lines up the last with the joints on either side of the pencil outline. Then he notes how much has to be taken off the heel to make it the right length. Sketching a few vertical lines on the heel to mark where the filing must be done, he puts the last in a vice and files it down in a few aggressive strokes. (This gets a lot easier with experience, he says. When you first start you take smaller, shorter strokes and check more often as you are less sure of taking the right amount each time.) The heel here has been filed down by around 2½ to three sizes.

Next the heel is slimmed on either side, working from the back forwards to get it in line with then pencil outline. Then the joints are filed, reducing them to the width of my foot and making sure they curve back at the same angle as well. In general the inside joint (at the base of your big toe) is the most important and must be cut very close. The outside joint can have a little more room. 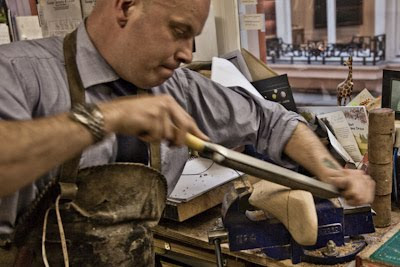 Next the waist is adjusted. By holding a pencil at the same angle as it was when the foot was measured, and drawing onto the paper underneath, Teemu can see how much the arch needs to be taken up. With mine, there wasn’t that much work required; “a nice healthy arch” as Teemu called it.

The instep (top of your foot, above the waist) on the other hand, needed quite a bit of filing. For this next stage of lasting – working on the top of the foot rather than the sides – Teemu needs to measure around the joints and instep of the last and compare it to George’s measurements. That also requires more of a rounded motion, taking roughly even parts off all of the instep. While this is less exact than the work on the sides, it is less important given the flexibility of the top of the shoe. 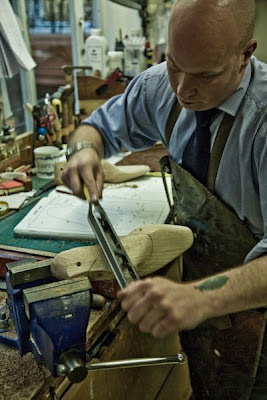 Finally, the toe. Reducing the size of the heel had made the length very close, but a few millimetres still needed to be taken off before the toe could be shaped. Because there is more room and style to the toe box, this is the point at which the exactitude of pencil outline gives way to artistry of design. I was going with the Anthony Cleverley style, slightly slimmer and longer than the ‘suspiciously square’ George Cleverley. So the toe was slimmed down, cut into above the toe and finally squared off.

In theory, one last means one style of toe. But the last can be adapted – most obviously, by shortening the longer Anthony to get a shorter, squarer look. But equally leather can be added to the end to elongate the last as well.

While anyone can opt for either style from Cleverley, some feet are obviously more suited to one or the other. Very wide feet will have trouble fitting well with an Anthony Cleverley. If they do go for that style, they could end up with a very long toe that doesn’t fit the foot as well and creases further forward on the shoe. So it’s worth getting George or someone else’s advice on the shape. 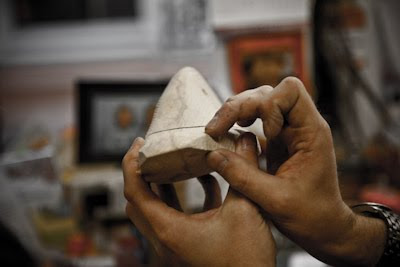 With a finer file, Teemu then smoothes off the last and adds the finishing touches. In particular, because the heel has been shortened substantially, the bottom is quite straight under the foot and finishes at the heel at a sharp angle. That has to be smoothed and rounded off; the waist too, for it is much harder for the shoemaker to create a bevelled waist if the last has not been rounded down. “I used to be a maker so I know what it’s like when the lastmaker doesn’t bother to do these little things,” says Teemu.

It’s also helpful to have worked with one measurer for a long period of time. “I’ve been working to George’s measurements for quite a while so I’m used to how he does things,” continues Teemu. “Everyone is slightly different and George always measures a little bigger than others.” [Pictured below, a finished left foot compared to the right only halfway through.]

While a normal last will take Teemu three or four hours, a difficult foot can take up to three days. 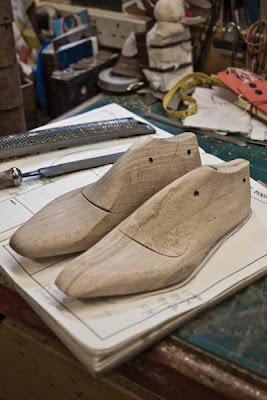 Next: clicking and closing

You can follow the discussion on Bespoke shoes at Cleverley: Part 4 by entering your email address in the box below. You will then receive an email every time a new comment is added. These will also contain a link to a page where you can stop the alerts, and remove all of your related data from the site.

I was on size with the plain colours (43) but sized up with the stripes (44). I was perhaps a little between the two, and the striped material is a little stiffer

Excellent value then for French tailor of this make!

Not particularly, except that I find it fine. I wouldn't want to be in it in maybe 35 degrees plus, but then in that kind of temperature I wouldn't be doing much but moving between air conditioning. I think it's also a question of priorities.…

DBs with gold buttons are very fashionable at the moment, but to honest I'd go with brown horn if you want something at all versatile and serious. Even if you already have an SB with them. Hopsack certainly wouldn't be too casual for a DB,…