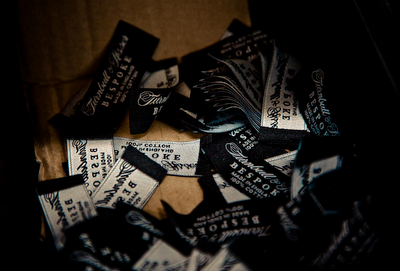 At the end of last year I had my first bespoke shirt made in this country, by Turnbull & Asser. You can see the various stages of the process, including a factory visit, in one of the new categories created on the right-hand side of this site.

The trial shirt I first received from T&A was rather bigger than I expected, in both the collar and body. While this was corrected for the final shirt, I couldn’t help feeling that the adjustments were rather large – down from four inches of room in the waist, for example, to one.

The up-shot was that my final shirt, though wonderful in many respects (from the construction of the collar to the fit at the shoulder point) was a little too tight. It looks and feels perfect when I’m standing up, but is too tight when I sit down unless completely upright. Which I am for much of the day, at my computer; but not when I start to slouch as the clock ticks past 4pm.

I can’t help feeling that if the initial, trial shirt were not so large we would have been able to find a better fit when we made the (necessarily smaller) adjustments for the final pattern.

And ever since I started wearing that final shirt I have wondered what I would have changed on a follow-up. Of the three measurements – chest, waist and hips – would I add an inch to all of them, or just an inch to the waist (which feels tightest), half an inch to the chest and nothing to the hips?

As per usual, I thought about this an irrational amount. I would understand if someone called it obsessive. But then, it is like having bespoke suits made: you rarely feel you’ve nailed it until the third or fourth suit. Though obviously a shirt is less complicated in terms of balance and drape.

Finally, last week, I went into T&A to order a new shirt. I was convinced to go for the first of my options – one more inch on all three measurements. This will retain the shape of the shirt, down through the waist and into the tail. Just adding to the waist would reduce that effect.

I shall wait to be convinced. The change is very minor, just a half inch on either side effectively; but I do like my current shirt a lot and I love wearing it. I just can’t slouch on the sofa without undoing at least one button.

Expect a report back in four weeks.

Simon
It’s interesting to read your T&A experience to date. David Gale has cut my shirts for several years, firstly at Dunhill and now at T&A. In spite of this, pattern drafting isn’t a robotic process and only through various tweaking of my first T&A shirt that he nailed the cut that I wanted. I would suggest going back with your original shirt to get it adjusted or remade again as the genuine attempt to get the fit you wanted didn’t go according to plan this time (which does happen now and again with bespoke garments).

Thanks C, great to hear your experiences.

Although of course the original shirt cannot be made bigger, unless panels are added. One disadvantage of bespoke shirts over suits.

I experienced something similar with my first mtm shirt. Perfect as long as I am standing, too tight as soon I sit comfortably.
As I bought the second shirt I went with your second option, adding 1,5cm to the waist.
I don’t regret it, the shirt still has a great silhouette.
As for the amount of thinking you put in your shirt – I did that too 😉

How do you recommend laundering shirts. I just got my first MTM shirts. I went for some nice Thomas Mason Silverline fabrics. Normally, I send shirts out for laundering with light starch. I didn’t want to put any starch in the first laundering of the first shirt, which requires two washings before the final order is put through on the other shirts.

It definitely wrinkled more during the day than my standard Brooks Brothers shirts. But, they also look like parachutes on my body, so wrinkles be damned, it’s a drastic improvement on fit.

I don’t have the time nor the patience to wash and hand iron my shirts after each wear, so for laundering services how should I order them?

Keep up with the ‘irrational, obsessive’ observations. Shirts have seriously never been as interesting as when you’re talking about the details that make or break them. Likewise for the other elements of this blog.

I’m afraid I have never sent my shirts out to launder. I know it is done more in the US, but in the US it is prohibitively expensive if you wear a shirt almost seven days a week.

I am really surprised the shirt was reduced to 1 inch allowance – the result you describe is inevitable. My clients tend to end up with between 3 and 4 inch allowance in the waist and that makes for a nice fit.

I guess perhaps two is my magic number

Did you ever do a follow-up report on this? How was the final shirt?

Hi S – not sure I ever did, but the results were much better, and I have since had four more made on the same shape. It’s a bit disappointing it took that long to get the pattern right, but that’s the problem with bespoke in an area you’re not familiar with.

I have had similar experiences with T&A. I am now on my third sample shirt, and I am guessing that it will take one or two more shirts before they get it completely right. This is certainly due to my awkward shoulders which they are having a hard time finding the right pattern for.

However it also gives me the chance to test what type of collar looks best on me. I have now gone for the collar that is slightly more spread than the Regent collar. Which collar did you end up choosing? Will you perhaps post photos of your final shirt?

I assume you’ve taken the picture of your shirt down? Any particular reason for this? I’ve tried T&A in the past and my shirt didn’t come that great. I’ll probably give them another shot at it in the near future though.

No, I never took a shot of the shirt as it was finished. Frankly I think a description is often more useful as photos can be so misleading.

T&A are not perfect, but I do think they are better than most at that quality, and are good value.

Re-reading this old post I am struck by you accepting that T&A only made you one trial shirt before completing the minimum order. This resulted, it appears, in shirts you were not quite satisfied with.

T&A made five trial shirts (or modified the trial shirt four times) before I (and they) were happy. Consequently I was very happy with all six shirts in the minimum order. I also varied the collar a bit between trial shirts before landing on one which a was completely happy with.

In hindsight, would you recommend new customers to keep insisting on having trial shirts made until completely satisfied (I know from experience that T&A has no problem doing this)?

Hey,
Yes perhaps I should have insisted on more trial shirts, although to be honest it wasn’t until several months of wear that I realised things like the cuffs should have been changed.
I think two fittings on a trial shirt should normally be fine.