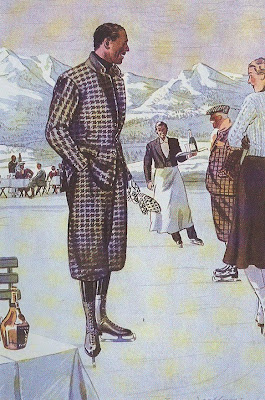 Esquire, January 1936: “Painted on ice, if not on skates, by Mr Saalburg in Switzerland, this scene combines the atmospheric with the informative. Realism is evident in the fact that the most agile figure is, naturally enough, the waiter. What the others lack in skill they make up for in appearance, presumably.

At any rate, the figure in the foreground, at least dresses the part. The suit is blue-grey tweed in a hound’s-tooth check, made in a three button single-breasted model with notch lapels and side vents. Beneath the jacket is a navy turtle neck sweater. With the knickers are worn full length wool hose, also of navy blue. Black and white Norwegian mittens complete the outfit.

In the wine-like air of a sunny day in the Swiss mountains, this turnout is warm enough for skating and for tramping through the snow. With the jacket off, the outfit pictured could be worn for cross-country skiing.”

I’m not going skiing in tweed and I’m not wearing knickers (of any sort). But that hound’s tooth would look smashing as a normal suit. I may even wear it with a navy turtle neck, you never know.

I can never find a suitable Houndstooth jacket anywhere now these days. Not even in my favourite shops like Cordings or Hackett.