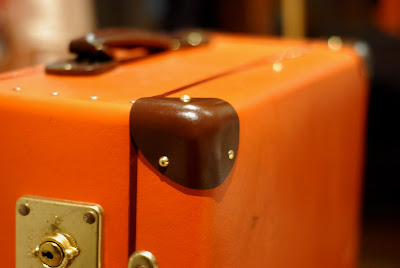 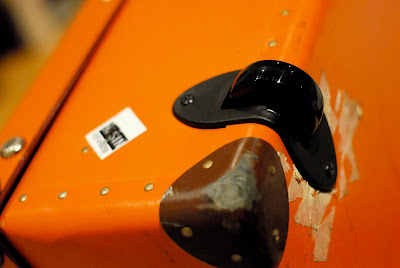 Usually it’s pretty hard waiting for your favourite things to come back from being repaired. But unlike the Edward Greens I reported on last in this series, my Globe-Trotter suitcase hasn’t really been missed. There were two weekends away in that period, both one night, neither of which called for a real suitcase. Judy Bown’s work got the job instead.

Nonetheless, it was good to have my battered case back, if only to relieve the anxiety of what was happening to it up in Broxbourne. Ever since seeing those EG’s ripped apart it’s hard not to feel anxious.

Thankfully all’s well, as these pictures attest. The new wheel and corner will both look rather new for a while, but only until baggage handling gets hold of it again.

And next time something gets damaged, I’ll remember to complain about it within the two weeks required for compensation from the airlines.

Hey, just found your blog while researshing on how the globe-trotter luggage’s are holding up. It’s been quite a time since you wrote the article but I am very curious on what shape your luggage is in and if you had to replace it with a new one.

It’s not great to be honest. Still issues with the hinges, and it’s so hard to roll well. I use Rimowa now

Hello Simon! How do you feel about your GT today? I am in the market for a carry on and I am considering GT, Rimowa or Away. I love GT’s aesthetics but worried about its practicality given the price point.

I wouldn’t buy it today, not practical enough. I use Rimowa