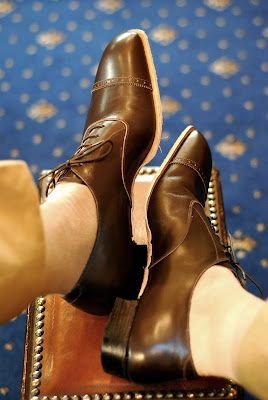 Last week was my second fitting at GJ Cleverley on the bespoke pair of cap-toes in the Anthony Cleverley style I ordered at the beginning of this series.

Having found that there was a little too much excess across the vamp, above the joints of the toes, at the first fitting, the last was whittled down and the uppers relasted to reduce that excess. Dominic Casey, who originally checked and lasted the shoes for me, conducted this fitting as George Glasgow has been in hospital (get well soon George!). 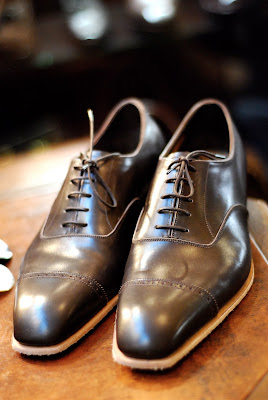 Dominic noted that they often allow more excess than might seem natural through this point of the shoe to create a graceful curve from the instep down to the vamp, before it curves up to the point of the toe. Obviously if the shape of the foot were followed exactly this slope down from the laces would be rather sharp.

The fit was much improved. Dominic recommended that the best way to check the fit was to make sure the leather was touching but not pressing both the big and little toes, and that there was just a little headroom above those in between. One should not go on the way the shoe bends at this point, as the lack of a sole means there will naturally be greater bend and hence wrinkling. 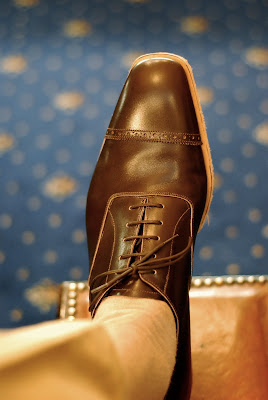 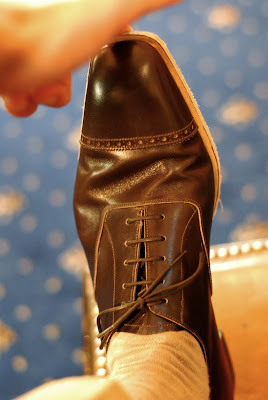 It is also important to remember at this point that once the sole is in place there will be greater support through the arches, given how high and close the waist will be cut. There is, though, more support at this stage than you might expect as the heel stiffener runs right up to the arch, stopping halfway along it – most ready made shoes have far shorter stiffeners (though I’m glad to say that my Corthays did have long ones, upon close inspection by Dominic).

Elsewhere on the shoe, I appreciate how closely the quarters fit around my ankle, keeping the foot in place. As Dominic put it, I am “terribly thin through the ankle” and as such few ready made shoes fit as tightly there.

The shoes now go back to Andy, who will add the sole and create and attach the heels. Depressingly or excitingly, depending on your point of view, we are still a few stages off the shoes being complete (wait until we get to staining and finishing!). 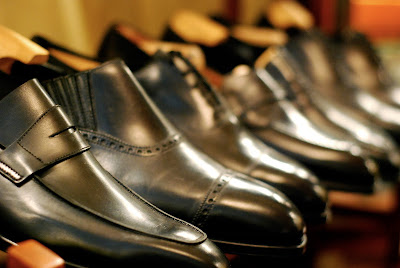 You can follow the discussion on Bespoke shoes at Cleverley: Part 9 by entering your email address in the box below. You will then receive an email every time a new comment is added. These will also contain a link to a page where you can stop the alerts, and remove all of your related data from the site.