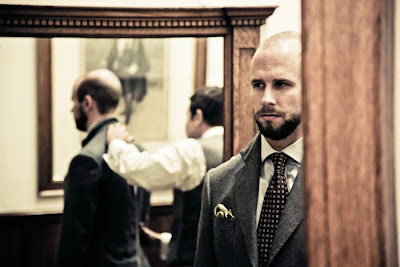 Following up on the last post in this series, on Huntsman tweed, this runs through the style of a shooting suit and being measured.

The suit shown here is three-button, but I opted for a more classic Huntsman one-button front in order to make it better for wearing casually. While I hope one day to wear the suit for shooting, I think with the five-button waistcoat underneath it will be warm enough. 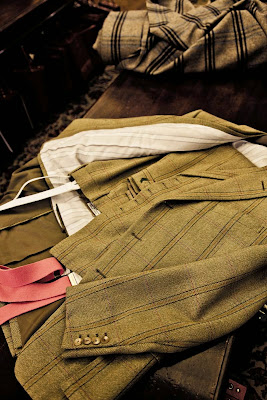 What will also help is the weight of the cloth (14-ounce) and the neck closing on the jacket, which features a buttoned-back tab under the collar and facing button to secure to. This is a feature I have on a couple of my casual suits, though I normally combine it with a button under the lapel as well.

Additional buttons are found above the hip (bellows) pockets as well, so that the flaps can be buttoned back for rapid access. Other pockets include a poacher’s pocket on the inside of the jacket and four on the waistcoat – what is known as a postboy’s waistcoat. Unlike the example shown here, however, I will have no flaps on the lower pockets as they are unlikely to be used when actually shooting. 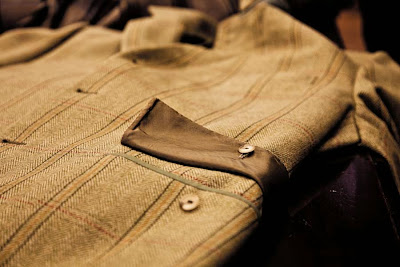 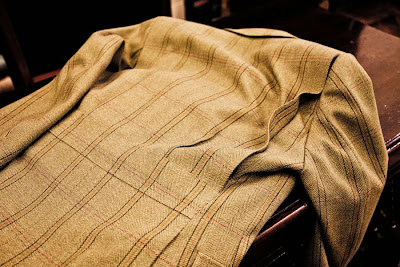 The back of the jacket will feature pleats (known also as an ‘action’ or ‘bi-swing’ back) to make it easier to raise one’s arms to shoot, and a purely decorative half belt. The sleeves will also be cut slightly larger – a ‘dirty’ sleeve – in order to help that shooting action.

The choice between plus-fours and plus-twos is largely a personal one. I went with plus-twos merely to have less material around the knee. And side straps on the waist. 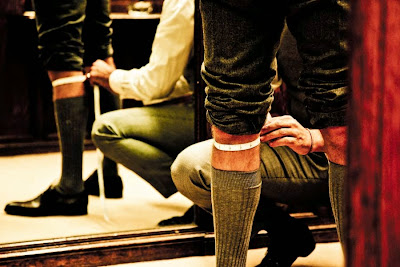 The plus-twos required one extra measurement in the fitting room: the top of my calf, which meant rolling my trousers up for David Ward to see them properly. All of a sudden I felt rather like a schoolboy. The long socks and flannel trousers didn’t help.

David will be cutting my suit. He has just this week joined Huntsman from Norton & Sons as a cutter. Readers with long memories will remember flattering words about David from Patrick Grant, owner of Norton & Sons, in a previous interview with Patrick on Permanent Style. 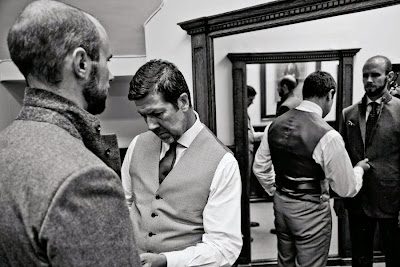 I was impressed with the exacting measurements, which were both more numerous than other tailors and involved a few little quirks. Unlike elsewhere, David kept my jacket on for the majority of the measuring (something mentioned in Richard Anderson’s fond memories of Huntsman in his recent book), used a square rule placed under my armpit to judge the size of the sleeve head, and took three photographs – front, side and back.

Interestingly, he also pinned the centre point between my shoulder blades, once found, and used that as a starting point for several measurements. The same was done for the small of my back. 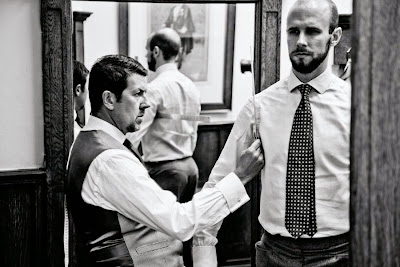 You can follow the discussion on Huntsman tweed suit: Part 2 by entering your email address in the box below. You will then receive an email every time a new comment is added. These will also contain a link to a page where you can stop the alerts, and remove all of your related data from the site.

No you're right, we haven't done a full post on it. I was waiting until I had the ready-made shirts as well...

Probably Trunk. The Riviera is a little slimmer and a little shorter I believe

Recently I discovered that a polo cashmere cable knit sweater I own was covered with moth holes. Professional repairs would have cost many times the original price of the sweater. I decided to repair it myself using some very thin “invisible thread” I happened to…

Dear Simon, this was a very helpful answer indeed. I have the feeling that all these are relatively short to the length of jackets in the 70s-80s and 90s. I feel jackets used to be larger in chest and definitely longer. R.A. has posted a…