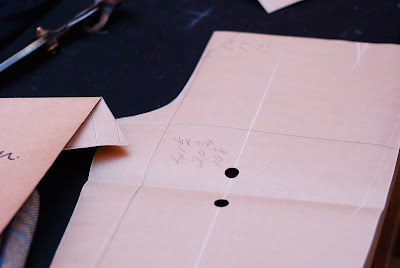 My pattern has been created at Huntsman ahead of cutting the shooting suit we began discussing a few weeks ago. Featured here are two aspects of it that are unfamiliar to me, and probably to many readers.

The first is the pattern for the plus twos. They will sit on the natural waist and come down over the seat in the same way as a normal pair of trousers. But once they drop below the seat they retain considerably more volume, narrowing only slightly to the knee and then the few inches below.
Although they will finish two inches below the bottom of the knee, those two inches are of cloth doubled up – the very bottoms fasten tightly under the knee and the excess is left to hang beneath. So they will be at least two inches shorter than the pattern suggests.
David Ward, who is cutting this suit, comments that some plus-twos have too much volume at the knee, failing to narrow at all and creating a rather ballooned effect. These are deliberately cut a little narrower.
The second pattern here is rather more complicated. It is one half of the back, featuring a pleat at the outside edge which, together with its partner on the other side, will create what is sometimes called an ‘action’ or ‘bi-swing’ back.
The paper must be folded in on itself to measure the excess cloth that will be contained inside the pleat, though when folded up its edge is just as a normal back pattern would be, as you can see from the images below. 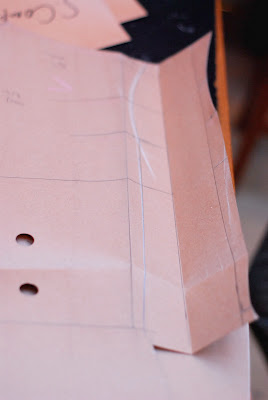 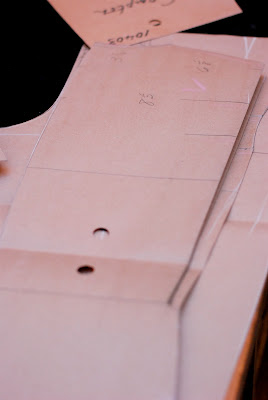 Next: The first fitting