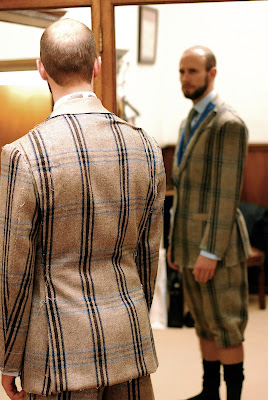 This is the first, basted fitting for my Huntsman shooting suit, following up from last week’s post on the cutting of the pattern.
You can see the line of the plus-twos, which are full yet narrow perceptibly to the knee. Adding a little bit more volume here was the only change David (Ward, cutter) marked up on them. They will be fitted with brace buttons and side buckles. 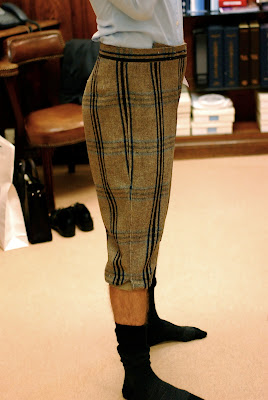 The waistcoat is one part of the shooting suit that, although designed for movement, can be cut a little tight. Once it is up against the body it would only restrain movement if it were any less fitted – David took out some excess here. It will also be shortened at the front as the last button should be in line with the bottom seam of the waistband on the plus-twos behind – it is currently an inch short. The shoulders also include a lot of inlay here – the final line of the waistcoat is marked up with chalk. 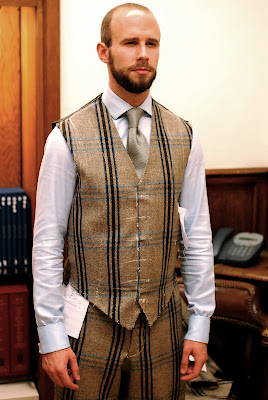 Finally, the jacket. A little excess is taken out of the chest, though a balance has to be struck with that movement required in a shooting suit. The collar is picked up a little at the back and the left side of the back also raised a touch. Otherwise all is well.
Notice how much the strong vertical lines accentuate the chest, making it appear bigger and also more rounded. The waist, equally, is highlighted by a horizontal line at that point. The lines on each sleeve were not matched up (you can see my right arm falls slightly lower than the left) and this will be corrected. 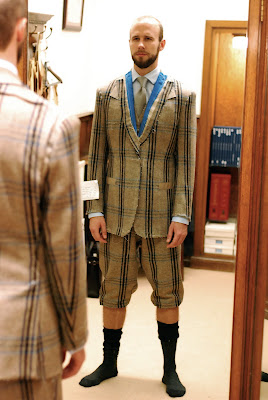 Those changes will be made and we’ll have another basted fitting in a couple of weeks. Interestingly David says he commonly has two basted fittings with a new client and rarely a forward. John Hitchcock at Anderson & Sheppard, by contrast, opted for a single forward fitting on my Prince-of-Wales three piece.
Next: The second fitting

You can follow the discussion on Huntsman tweed suit: Part 4 by entering your email address in the box below. You will then receive an email every time a new comment is added. These will also contain a link to a page where you can stop the alerts, and remove all of your related data from the site.

He (fairly obviously) means the one due to air in April and postponed to November... Well done Simon. I know you’re rightly of the view, contrary to some menswear writers, that being featured in a Bond film does not make something stylish or cool in…

We're just seeing now when we can get new leather. Do email [email protected] if you want to be on the waiting list and get a notification of availability