[Note: The Dandy Store has been bought by Mes Chaussettes Rouges, who can be found here]

Apparently, men in France wear appalling socks. I thought the standard in the UK was low, and the US probably worse, but according to Michel Porteneuve and Jean-Christophe Hanier at The Dandy Store, the French take the biscuit.

No pattern, and precious few socks above the calf. The latter fact spurred Michel and Jean-Christophe to set up their own socks business online; the former was their unique selling point.

The Dandy Store’s socks are made by Bresciani in Italy. Bresciani makes for a few online retailers, but is still less known than Falke, Pantherella or Gallo. The French pair considered all these makers and more, eventually narrowing it down to Bresciani and Gallo based on both manufacturers’ “quality as regards length, softness, durability and craftsmanship. We required at least partial hand-construction and an originality in both patterns and fabrics,” they say. In the end Gallo lost out to Bresciani on durability, innovation and because the former was a more common name in France.

While Bresciani makes socks for several of the luxury houses, including Arnys, Corneliani and Brioni, its output is normally quite conservative. Which is where the USP comes in. The Dandy Store purposefully offers unusual patterns and colour combinations (all exclusive) that Michel and Jean-Christophe haven’t seen elsewhere. “Among Bresciani customers we are the black sheep, always trying to get them to do something unusual,” says Michel. “Though I’m pretty sure they could do anything.”

This is pretty obvious from the website: grey and burgundy mix together on one intricate pattern; stripes come in ‘anis’ and ‘bistre’; a ribbed design combines charcoal and chocolate. But while the blends are unusual, the patterns are relatively subtle – no polka dots, no bright blocks of colour, just herringbones, hound’s teeth, ribs and argyles. Overall it makes for socks that don’t shock from a distance, but reward closer inspection.

There is a real lack of good socks in the UK, as well as France. I live and work in London, am in the west end most days, yet I can’t find good over-the-calf socks in subtle vertical stripes. Or any other subtle but sophisticated pattern for that matter. Everyone sells block colours, in every shade, but I don’t want lime green or emergency orange. I want a sock that compliments my suit, tie or handkerchief with subtle variations on their dominant colours. Even a grey or navy with a subtle stripe would be fine.

So I’m glad I found the Dandy Store. Its scarves and ties look nice too, but I can’t vouch for them – unlike the Harlequins in blue and purple, which I’m wearing right now and both look and feel lovely. 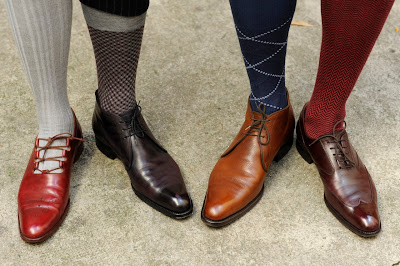 Thank you for sharing this! Those socks are really something, especially the houndstooth ones.

I have one question for you though: have you worn them long enough to discover if they are hard wearing? One problem I have had when buying finer quality socks is that they often seem to wear out very quickly.

No Martin, and you make a good point. Other customers of Bresciani may be able to give that feedback here but I can’t.

I’ll be sure to report back in six months when they’ve had plenty of use though.

Although, in six months I’ll probably have bought a pair of my own 🙂

Thank you for your post Simon. We are happy to see that you enjoy our socks.

To celebrate your message, we have a special discount: buy three pairs from the fall/winter collection and you will get a 15% discount on your basket.

To answer to Martin O: Jean-Christophe and I are wearing everyday our socks. We still wear pairs from January 2009 so we can attend that they wear no that fast.

But, to be sure that they last long, you should wash them using the gentle cycle at 30° Celsius maximum.

You should not dry your socks in the dryer because it is tightening the threads and the fabrics (it is especially true for the wool, and not only for socks).

One last advice, like shoes, you should have spair pairs (and this is not because I am selling them ;-).

At your service,
Michel

Indeed, that’s the day job. I was editor of IFLR for five years. Just switched to be editor of Managing Intellectual Property – http://www.managingip.com

just so you know, the promotion is not only for M. Crompton but to everyone.

I can vouch for the logelivity of the socks. They tend to get shorter and start zu relax a bit after a few washings (30 degree wool cycle only!), so after a few washings they don’t stay up by themselves but need the help of some garters.
Otherwise they are great socks.
See me wearing them here: http://rausgeputzt.blogspot.com/2010/08/tragebericht-dandystore.html

Simon do you know where Purdey socks are made? All Purdey cloths are really fantastic but apart of the shoes that are made by C&J I have no idea of where they como from.
Congrats for your superb blog.
Regards,
N.

I have had great socks from Mes Chausettes Rouges [advertised on this site] and on balance find the Mazarin brand fits me better than Gammarelli. I have thick calves – from cycling I say – and so fit varies. Bresciani are a bit tight for me when the sock fits my foot. Sadly, I get no sponsorship from any of these companies…