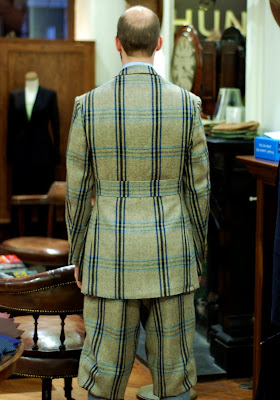 Tailoring is a very technical art. Despite the many times I have seen a suit being chalked, cut and made, there is still an awful lot I don’t understand and certainly can’t explain easily. Perhaps it could only be fully understood by doing it yourself. It’s something others could bear in mind on occasion too.

It is satisfying therefore to feel you fully understand something that previously proved elusive. In this instance, it was the pattern matching on the back of my Huntsman shooting suit.

On the finished jacket, as you can see above, the pattern does not match at either the belt or the collar. Now, it can never do both – or is highly unlikely to – because the width of that central check fluctuates with the shape of your back. But the pattern is normally set to match the collar and then fluctuate on the way down. On stock examples of this cloth in the Huntsman shop the collar matches but the belt does not – indeed, the difference at the belt is even more pronounced than on my version, as they are made with a greater drop between chest and waist.

During the fitting, David Ward decided that the collar needed to be pushed up the back of my neck in order to sit sufficiently tightly. That meant that the two backparts had to be heightened, requiring the central seam to be split and some of the inlay in the seam used. That moved the check apart at the neck, by around 3/8 of an inch. The only way to avoid this difference would be to cut an entirely new back, which perhaps David could have done.

It was certainly right to improve the fit at the expense of the pattern matching. The fit of a bespoke jacket should always be the priority, and I think you can see from the clean finish to the back that that fit was very good.

On the plus side, we decided that there was room to take in the waist of the jacket (as I will wear it without the waistcoat as much as with it) which will allow the checks to match, as least as much as is possible with a loose piece of cloth. We also lifted the sleeves on either side slightly, to deal with a little buckling under the shoulder, and lengthened the left sleeve half an inch.

I suppose complete pattern matching is never achieved on moving parts, and that would only be amplified when the pattern is bold and quite loud like your Hunstman in the photo.

I recall thinking, when a photo was posted previously, that the skirt of that jacket looked long. Maybe it’s an illusion because of the belted back?

You’re right, Huntsman tends to cut a slightly longer coat than others.

I think that it looks better as is, to differentiate the belt from the rest of the coat. It increases the sporty look of the coat.

Curious; how would you all compare Huntsman vs. Richard Anderson?

I tend to agree with your statement that when it comes to bespoke fit should be the priority and i think that when looking at the belt one can see that while the patter don’t match the offset of the patterns is even which has a quite pleasing effect. However in the collar it seems as if the pattern are matching on the right and not on the left. This may be effect of how the collar was laying in this particular photo or an effect of your being slightly asymmetric, and the cutter having to cut the right back slightly differently than the left. it would be nice to know which it is.
it is also possible to have the patterns match in both the collar and belt by recutting the back as you say and by adding a seem to the middle of the belt that would have allowed them to increase the space between the the stripes on the belt. this is not a simple task even for bespoke craftsmen and the only place i have ever seen it done was on vintage YSL couture

I disagree on the belt – better to retain the repeat of the check there. Inserting a seam would look ugly and make the pattern of the belt look odd as well.

But a precedent has been set with the seam in the center of the jacket, granted this would be a construct only for the sake of pattern matching. But, sartorial misplaced effort or not, it’s a solution. (And better to have the eye go to the finer points of the suit than the one fault.)

I read this piece with some interest last year, and thought you’d made a pretty bold choice with the pattern. What I really wondered though, as a keen shot who sticks religiously to one baggy jumper in order to have maximum range of movement, was how the suit would be to shoot in. Have you had a chance to put it through its paces? How did you find it?

Afraid not, I’m not a hunter. The outfit does work well cycling though