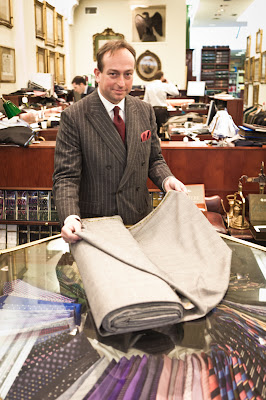 This is the first post in what will be a series on having a double-breasted suit made at Henry Poole, in Prince of Wales cloth, as in Edward VII, but with the Duke of Windsor’s addition, originally from the Seafield estate, with the exclusive Henry Poole overcheck.

It’s a relatively simple story, but one that can confuse. Indeed, does confuse many people – even authors.

The Glen Urquhart check was originally invented and woven in that area, just south of Inverness in Scotland, in the early 1800s. Its production was sponsored and developed by Caroline Countess of Seafield, who adopted the pattern for the Seafield Estate in 1840. Its repeated pattern of large checks in black and white was innovative, distinctive and much larger than the pattern we think of today as the glen check or Prince of Wales.

When the young Edward VII visited Castle Grant, the Seafield’s Estate at Grantown-on-Spey, for shooting trips, he took a fancy to the design and adapted it. It became brown and cream, but retained the larger scale. The pattern became known as the Prince of Wales check as a result.

Henry Poole was the tailor to both the Seafield family and Edward VII, making the first pieces in that cloth for both the estate’s staff and the future king. Although the Seafield family no longer has its staff’s clothes made bespoke, the connections with Henry Poole remain. At the head of the stairs at 15 Savile Row today stands the picture below of Seafield staff in checked three-pieces, the results of the day’s shoot just out of shot, which was given to Poole by the Seafield family. 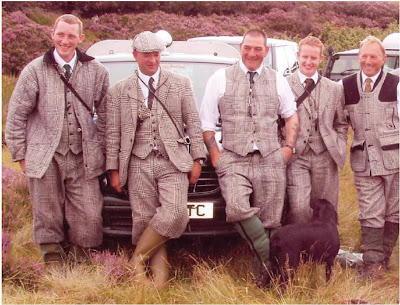 Edward VII continued to adapt the check, and it was he who later shrunk it down to the size we know today. His grandson, briefly Edward VIII and later Duke of Windsor, added overchecks in red and blue, and popularised the fashion when travelling in the US.

Henry Poole now weaves an exclusive version that draws on both Princes, being black and white, of a smaller scale and incorporating the Henry Poole burgundy as an overcheck. It is woven by Fox Brothers, in 10oz at Super 120s with a touch of cashmere. 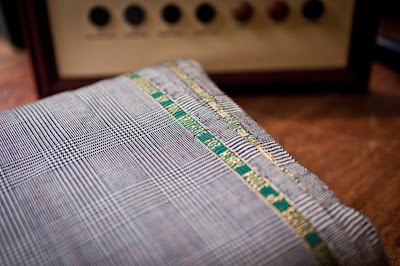 Prince of Wales checks of all types have all been a favourite of mine, from my first designer suit (Etro), to one of the first I had made in Hong Kong (Edward Tam), to the suit I got married in (Ralph Lauren Purple Label). So I’m very excited about having this suit made, particularly as I think the burgundy overcheck is more versatile than almost any other, and goes particularly well with brown shoes. Always nice to have a little history, too.

There will be a post in this series every week. Next week is the measuring and order, with cutter Craig Featherstone, then we will watch the cutting being done, the coat and trouser making, and finally the fittings. The coat will be made by John Dryer, with his apprentice James, and the trousers by Edward Cooke with Sian finishing.

For those that are interested, Simon Cundey (pictured top with the cloth) says the closest cloth to Edward VII’s brown check is from Porter & Harding, number 44535. The closest to the Seafield check, the original of which is an estate cloth and therefore not available to the public, is probably from W Bill, number 30073. (Both pictured below.) 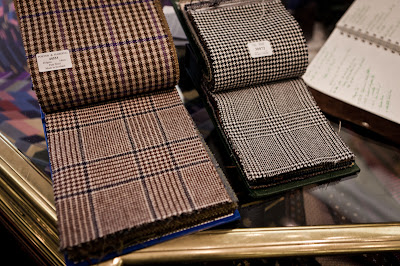 You can follow the discussion on Prince of Wales at Henry Poole: Part 1 by entering your email address in the box below. You will then receive an email every time a new comment is added. These will also contain a link to a page where you can stop the alerts, and remove all of your related data from the site.