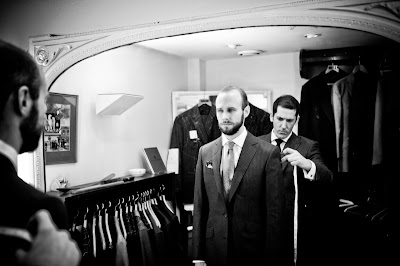 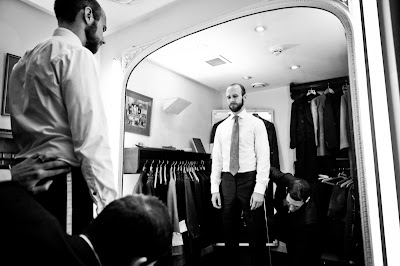 The second post in the Henry Poole series, this illustrates the measuring being done by cutter Craig Featherstone – with Simon Cundey taking notes. (Previous post on the cloth is here.)

Craig is refreshingly honest with his references to the various aspects of my figuration. None of the initialisation you find with other cutters: my prominent seat is described as such, rather than being a PS, BS or LS. Prominent shoulder blades similarly described, as are sloping shoulders and hollow back.

Craig is also one who likes to see every aspect of you. He likes to measure on a preferred jacket as well as on the body itself, and he takes photographs to remind himself of figuration – back, front and side, all standing in front of the door. These things are so much less intrusive when everyone has an iPhone.

Both the photos and measuring with a jacket on are fairly standard at Henry Poole. I have to say the latter works best if you are wearing bespoke, and indeed like the fit of it (a little tip for anyone going to a tailor for the first time), while the former is of benefit to anyone that seizes up under a measuring tape. No matter how many times I have a pattern cut, I can’t manage to stand at ease consistently. Something about the tautness of the tape being held against you. The same doesn’t seem to happen with a photograph.

Credit should go to Andy Barnham, the photographer, both for the quality of his shots and the fact that he managed to not be in any of the photographs despite standing in a six-foot square room with a mirror on facing walls. 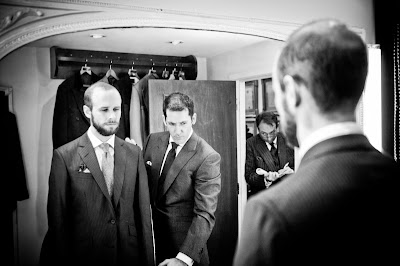 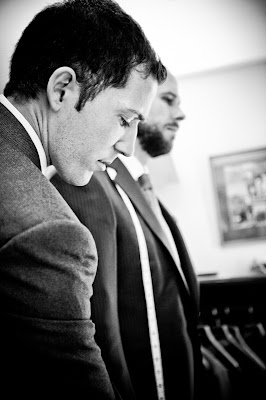 Hi Simon,
Who made the suit you are wearing and what is the width of the lapel.

Timothy Everest, and I believe 3.25 inches

I may have missed it in the previous blogs but what was the process in the first meeting? Was it just a consultation or did you start picking fabric and then got measured? I am wondering if it is the same process for their US trips.

Installments one and two in this series are from the same consultation. The first post looked at the cloth (you can find it by searching the site) and the second, above, looks at measuring.

I hope that helps

Thanks, yes it does help. I have stumbled upon your article because I was looking to contract Henry Poole for a suit. Since the article is around a year old, how happy are you with the suit? Any pros/cons? And if you had to make any adjustments, how did that turn out?

I’ve been very happy. Nice fit, structure but not too much – between a Huntsman and an A&S. Nothing showy, nothing very distinctive, just a great suit.

Sorry one last question. When you were picking fabric, how did the pricing work? For example if their price started at £3000, we’re there a lot of choices for that base price or did you have to “pay more” for the one you got.

You could get most things for the starting price, yes.

I’m sorry if this looks rude, but, as with your A&S suit, the shoulders are too narrow, in this case, your arms are virtually popping out of the tops of your sleeves. The flat front trousers are fitted in a way that makes your -ahem- looks like it’s being strangled, complete with arrow-looking wrinkles pointing at the scene of the crime.
I like the fabric, though.:)