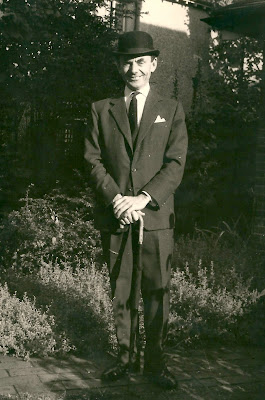 My grandfather, JFN “Bill” Wedge, was born in 1921 and worked his whole life for Barclays Bank, interrupted only by serving as an officer in the Navy during the Second World War. He retired in 1981. During those years he didn’t spend that much money on clothes – he began as a clerk in a small branch in Croydon, south London – but he certainly cared about what he wore, and has done ever since.

Talking to him about exactly what he and his colleagues wore, particularly in the first 30 years of his career, is quite revealing. Much of our discussions of dress, after all, focus on royalty, celebrities or aristocrats. And we are none of these things. This is what ordinary English men, men like us, wore during those purported heydays of style.

When did you first go to work and what did you wear?

In 1938. I had one suit, mid-grey, made by a local suburban tailor and which I wore every day.

I wore black cap-toed shoes, with socks to match the suit (short, not knee length). The shirt was soft-collared – men higher up in the bank wore a detachable, stiff collar, but I didn’t as a junior – and double-cuffed with cufflinks.

I didn’t wear a hat, although when I spent two weeks in a City branch I borrowed my father’s brown trilby to wear. The hat showed a difference in formality between town and the suburbs.

The trilby was always brown, as were accessories like gloves and a briefcase usually. No brown shoes of course though – those were just for the weekend. I remember saying to a friend at Midland Bank who was retiring, it would be nice to see him in town, “but I suppose it will probably be in brown shoes from now on”.

Suits were all three-piece, high-waisted with braces. You needed the waistcoat as there was no central heating, and you worked all day in the full suit. The only exception was something we called a black alpaca jacket. I don’t know whether it was made of alpaca or not, but that’s what we called it and you wore it instead of your regular jacket, to save the wear. It was very lightweight and, because it was black, respectable.

Overcoats were grey or navy. And you always carried an umbrella everywhere. Even at the height of summer, I’d have the umbrella and, later, a bowler. It was ridiculous really.

What ties did men wear?

We didn’t wear regimental or club ties really – club ties came later and it was too long since the First World War for regiments to be relevant. So just simple, conservative patterns. There was a bank sports club tie, but that was about it.

I always wore a white cotton handkerchief as well. It was just for show – you might have another to blow your nose. I remember some men had a piece of cardboard with three little perfect triangles stuck on the top. 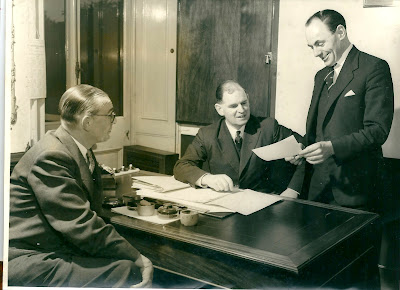 What did you wear at the weekend?

A blazer or sports jacket and flannels. That has been the weekend wear ever since I can remember. Very occasionally it might have been a suit – I remember buying a tweedy suit at one point – but that was an exception. I wouldn’t wear a hat necessarily, perhaps a cloth cap if the weather required it. But a proper hat was for the office.

There was no dress down on Fridays, no one was off to the country in the evening. But we would wear a sports jacket and flannels if we were open on a Saturday morning. And on Saturday night the brown shoes would be changed at the door of the church hall for black-patent pumps, ready for dancing.

What did you wear during the War?

You lived in your uniform largely. A matelot with red badges for every day, and a number one suit with gold ones for going ashore. New collars were sometimes trailed in the sea to make them paler blue and so imply longer service. There were plenty of fiddly knots you could tie with your cap ribbon (which in my case read ‘HM Minesweeper’), which the old stagers were masters at.

As an officer I later wore white shirt, separate collar and black tie, with a wing collar for special mess nights. I remember when desert boots became popular for off duty, as well, and I’ve had a pair of suede shoes in that colour ever since.

What changed after the War?

Nothing particularly. We were given a demob suit – mine was blue with faint red stripes – plus I think a raincoat and a pretty awful hat. I supplemented that with my existing grey suit when I returned to the bank. There was no new suit, but I remember buying a pearl-grey poplin shirt, which I treasured.

I was posted to the City, to our chief foreign branch, in 1951. That was when I bought my first bowler hat, from a shop in Gracechurch Street. I remember your head was measured using that wooden frame with the pins around the edge. Then the assistant steamed it into the right shape for you. I later bought a bowler from Lock & Co that I still have.

Not everyone wore a bowler hat. Some wore trilbies, some wore no hat at all after the War. I was probably putting it on a bit, for someone who had just arrived. But as a colleague said of me at the time, “Bill, if you had money I could see you becoming a bit of a fop”.

Is that when club ties became popular?

Yes, after the War there was rather a craze for them. I remember my old boys’ club having a discussion about what tie they should have. And I was a member of the Cornhill dining club – the debate there was over whether the tie should have silver or gold head of corn on them. I was for silver and I think I lost.

Before the War these ties had just had stripes on them, but now they had motifs, or both, simply because there were too many clubs for just stripes. People wore ties from their tennis club, their local golf club. The Fifties was certainly a time for ties.

What changes were there in dress in the Sixties and Seventies?

Not much changed in terms of office wear. Kipper ties were popular at one point. I had a couple of suits made by Hector Powe. Cap-toe shoes gave way to half brogues – from Church’s. And waistcoats slowly disappeared.

I stopped wearing a bowler hat probably some time in the early Seventies. I was by no means the last man in the office to wear a bowler hat, but during the Sixties it was a rare enough sight in London for me to become something of a tourist attraction (see image, top). Foreigners would occasionally stop me and ask to have their photo taken.

You travelled a lot in Asia for the bank during this period. How did that affect what you wore?

We wore lightweight suits. No linen, all wool. But we did have to carry black tie everywhere with us. Because there would be formal dinners and everyone would dress for dinner. Soft collar, soft Marcella front, buttoned with a cummerbund. I never had a set of studs. When I first started work that kind of dinner would probably have been in white tie, but I wasn’t invited to any at that stage.
The clothes for travel might not sound much, but I remember travelling with the vice-president of the bank at one point, and him saying, “Bill, how is it you always seem to have the right thing to wear?” 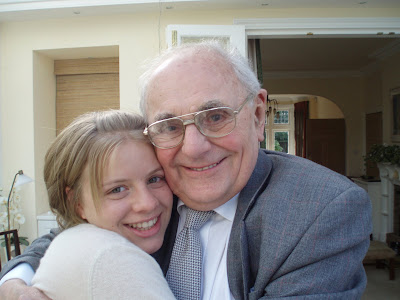 Simon – a fascinating interview. Thank you for sharing.
Regards
Mark

Interesting interview and insight into the sartorial trends of the recent past. Your grandfather is true gent with a good and sensible dress sense. Nice pic of him and grandaughter too.

Simon, all I can say is this is probably the most significant interview I’ve ever read on menswear. What a wonderful, wonderful experience it must be to be able to sit down and have a conversation on one the greatest passion of one’s life.

Absolutely charming and fascinating, thank you.

Nice. Thanks for sharing this.

Absolutely wonderful! My grandfather was a gentleman of the same generation, and I distinctly remember him dressing in a similar fashion. He was a college professor, and didn’t retire until the mid-90’s, at which point he was one of the few folks left at Princeton still wearing three piece suits to lecture. Kind of a shame to have lost that formality…

Terrific piece. I really like the distinction between city and suburb/country. and workweek v. weekend. Plus, I find it interesting that one suit was able to handle the day-to-day. It argues for fewer, high quality garments in today’s society, rather than a lot of disposable cheaper garments.

I’ve been reading your blog for some of years already, when I was still living in my native Brazil. It has been invaluable in my quest for better, proper and enjoyable dressing. I have been living in London for a couple of years now, and have been taking advantage of your insights into the city’s marvellous shopping options. But I have to say, this interview was amazing. Touching, interesting, charming, a window to the past of this great, great city, and great English tradition. Thank you very much.

Very good piece, thank you. Nice te read about the soft collars, I think I will try and follow.

Absolutely fascinating article. Thanks to you and your father for sharing this.

Great piece, in many ways. The VP quoted at the end nicely sums up what style is about, wearing the right thing. Thank you.

I’ve never been prouder as a cousin or a grandson! Simon this article is fantastic, possible my favourite; to think that I’m related to such sophisticated chaps (who’d have thunk it)

Simon – I’m a long time reader but I’ve never felt the urge to comment but this really was a fascinating interview, all the more so as a young professional in finance who has already in my short career witnessed the move from suits to business casual!

That’s so lovely to hear, thanks Sean