I’ve always loved Drake’s ties but found it hard to explain why. There isn’t that much to the making of a good tie, after all – just hand cutting and a slip stitch. The biggest difference is in the aesthetics: the dying of the silk and the design of the patterns. So I quizzed Michael Hill at Drake’s about it recently, to get to the bottom of some of these details.
First, the dying. Drake’s doesn’t do much inkjet printing, which is how most mass production ties have their silk printed. Instead they use dye-and-discharge hand-screen printing, where each colour layer is printed separately onto the silk, penetrating it each time. Two men stand either side of the sheet of silk with a frame and press the dye on, taking care to apply pressure evenly all the way across it. The two men often have to be similar sizes to ensure that consistent pressure.
With inkjet printing, the colours are printed in one go on top of a generally white base cloth and that base colour is just omitted in the printed pattern.
“Our method takes longer, is more expensive and more labour intensive,” says Michael. “But we think it produces a richer hand. Inkjet has its merits and can be useful in certain situations, such as lighter summer colours, but anything deeper – particularly ancient Madder – needs that luster in the cloth.” 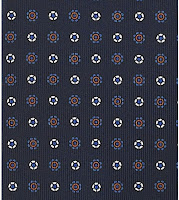 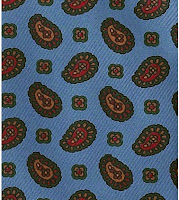 The Drake’s silks are all now printed up in Macclesfield. While Michael thinks it is important at one level that the dye-and-discharge method is the original, traditional printing technique, the superior quality is the overriding factor.
“You feel it when you tie it, when you wear it and somehow it lasts better as well,” he says. “Even at a basic level, it’s easy to understand that if you just print on the surface, rather than penetrating the cloth each time, it’s never going to have the same richness.”
Then there are the designs. Which are very subjective. But presuming that I think the Drake’s designs are the best around, and casting aside Michael’s modesties, how does he put those combinations together?
“A lot of the basics are inherited, from the printing now in Macclesfield, and that we used to do in Crayford in Kent, from Michael (Drake) working with the printers over the years and their work for generations before that.”
OK, but casting aside everyone else’s contributions? “The philosophy is about those traditions, about a soft, slightly aged look. It is traditional English style, but softened to make it more versatile and international in appeal.
“We are also always careful to think of any tie not in isolation, but with the jacket or shirt it will go with. From strongly striped shirts to bright tweeds and simple business suits, they all have this in mind,” Michael says.
That softness is being exaggerated today with more Drake’s ties having a lightweight lining, often untipped and with hand-rolled edges. They are easier to wear with more casual clothing, and I’m not surprised that Michael says these are the most popular with younger customers.
I also like the point about having an international appeal. Michael Drake used to talk about English aesthetics as worn by the Italians. That makes sense, given Drake’s has always been an export-driven business, but it is interesting that there is some idea of a global consensus in style, English in origin but suitable to any international environment.
“Given this consistency, I always worry slightly at the beginning of each season that we won’t be able to come up with another range. But once you start the process, and look at our archives as well as those of the printers, ideas develop very quickly,” says Michael.
Subtle colour tweaks or new yarns are often part of that, and Michael talks of a new technique they will be working on for next year: printing Madder on a schappesilk, where waste cloth is woven back into the base-printed silk. It creates a particularly subtle, dusty look that compliments simple Madder designs.
It is a reflection of the strength of the Drake’s aesthetic that I think I can already picture the designs. And they go with everything I wear.

simon, could you advise on the construction of drakes ties? do they make 4, 7 fold etc, use interlinings? simon

Pretty much entirely three fold, lined and tipped. Some untipped now and lighter linings, but that’s a recent phenomenon

Glad to hear that. Always preferred Barba over the rather stiff Drakes. A Good excuse to buy more Drakes ties.

My usual problem is that after a while my ties become permanently creased where the knot is. Once that happens I find it much harder to get a dimple, and the ties become relegated to the second drawer which isn’t used as often as the first drawer. Since I’ve heard a great deal of good about Drakes I just bought my first tie from there. It’s much stiffer than I had anticipated, but it is indeed beautiful. I’ve only worn it three times, so can’t comment on the permanent creasing aspect of it for another 6 months.

Is there something one can do to prevent or fix this creasing? I carefully untie my tie at the end of the day, roll it, and place the roll sideways in a drawer. My ties are not stacked on top of each other in the drawer.

Always hang them after wearing, P, so the tie can relax and the creases drop out. I you store them rolled that’s fine, but hang them up for a day or just overnight first

I have always been a fan of Drakes ties as they not only reflect English aestheics, but the artisinal qaulities of British craftmanship. They show what the British clothing industry can do if they have the passion,vision and commitment.

I’ve always had a problem pairing a tie with a shirt and knowing when is the right time to have the patterns clash instead of match. I really like several of the designs on the Drakes website and, from the information in this column, the craftsmanship looks outstanding. I’ll need to upgrade my collection!