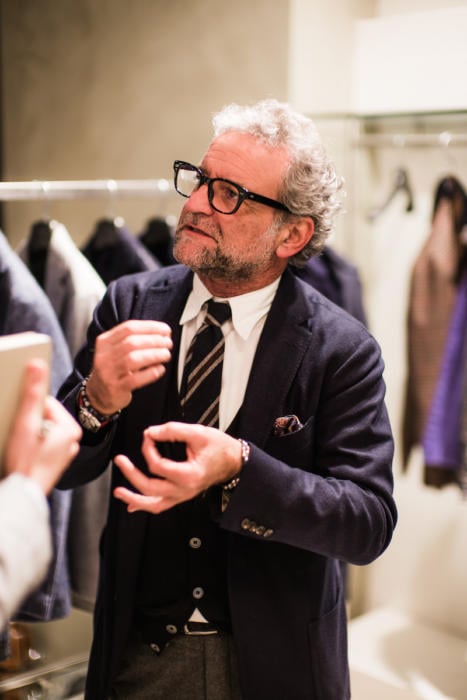 Back in June, standing in Pisa airport with Luke, we considered the dozen or so buyers and journalists we knew who had been on the same flight.

Some were wearing, consistently, good-quality clothes. They clearly understood what we talk about here on PS so much – the value of craftsmanship and quality. They were knowledgeable. (Admittedly it probably helps that they could buy everything wholesale.)

Then there were those that, despite not wearing particularly expensive or well-made clothes, looked good because the pieces had been well chosen and assembled. This is the most common type among the English: men with taste. You’d put money on the fact they also had beautiful upholstery at home, and knew at least a few William Morris patterns by name.

Finally, there were one or two men who just had style. Their clothes weren’t necessarily well-made, or tasteful, but the way they wore them almost overcame all that. It was an attitude, an angle, a gesture. Most of them looked a touch Italian.

If this were a Venn diagram, there would be a few acquaintances in the overlaps: those with both knowledge and taste, for example, but not much flair to it.

And there would even be the odd person – perhaps just one (we will spare him the embarrassment of being named) who sat square in the middle. Who had all three: knowledge, taste and style.

They are very different attributes, and ones that different people aim for with different levels of success. But they should not be confused with each other.

Of course, as so often happens, we later remembered that someone had put better than us about 50 years ago. As Hardy Amies said: “A man should look as if he has bought his clothes with intelligence, put them on with care and then forgotten all about them”.

Here’s hoping Permanent Style helps with the first and second, and habit does for the third.

Pictured: Vincenzo Attolini, a man with oodles of style

You can follow the discussion on Do you have knowledge, taste, or style? by entering your email address in the box below. You will then receive an email every time a new comment is added. These will also contain a link to a page where you can stop the alerts, and remove all of your related data from the site.

That's lovely to hear, thanks. If you ever have any ways you think we could improve, please do let me know

Yes it is from Fox but I'm afraid I don't have the code to hand, and it may also have changed. I think there's only one mid-weight light grey in that bunch though. The socks are from Breciani via Mes Chaussettes Rouges. Again, they're old,…

Not usually Chris, no. Some tailors may charge an extra margin on cloth when they include it as part of a suit purchase, but then they usually buy it at a cheaper, wholesale rate than the customer can as well, so there's no guarantee you're…