Someone commented to me recently that I wasn’t living by my waistcoat theory (see postings on January 16 and 18). Given that Men’s Flair is “men’s style as seen by those living it” this is probably a fair criticism.

The waistcoat theory suggested that modern air conditioning meant a waistcoat and trousers would be the work attire most in line with traditional menswear. As men never wear a jacket around the office, the beneficial effects of a suit are almost entirely lost. A waistcoat, on the other hand, retains the shape and elongation of a suit while being comfortable for work at a computer and not too warm for an office with central heating.

This was meant as a theory more than anything else – to make a point about how a suit, despite all the time people spend thinking about it or having it made, is actually worn. But it wouldn’t be much of a theory if it was never put tried in practice.

So today I opted for a grey flannel waistcoat and trousers (two pieces from a three-piece Ralph Lauren suit), dark brown derby shoes from Richard James, and blue shirt and dark blue tie.

One tip: both waistcoat and tie should be plain. Most people have memories of an awful waistcoat some relation or other wore to a Christmas lunch. This is not a wedding and the waistcoat should not be fancy. The tie, equally, should not be aimed at drawing attention to itself. If anything the shirt should have the pattern, perhaps a thin stripe, which will also help add width that the waistcoat lacks as opposed to the jacket.

There is one problem with the theory though – most waistcoats are made too short. Originally, all suit trousers sat on a man’s waist (above the hip bones and probably just under the belly button). At this height, the waistcoat and trousers would overlap by at least an inch or so, allowing a man to sit down or stretch without exposing his shirt. 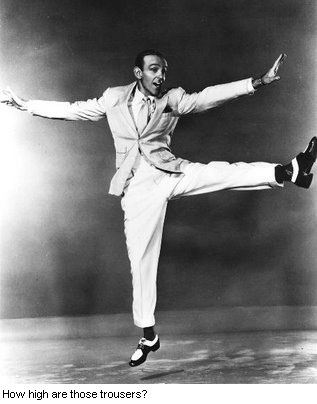 Today, most waistcoats are made at the same length, but trousers are worn closer to the hips. This can create unattractive ballooning out from the waist of the trousers, particularly if the shirt is not particularly fitted.

Some waistcoats are made slightly longer in recognition of this. And while they will never completely correct the problem – as they would have to go down over your bum to overlap the trousers by an inch or more – this is a step in the right direction. I recommend Flight, a company that sells high-quality suit separates in green, blue and grey flannel.

can you post a link to this flight company you mention? I’ve been unable to find them through searching online.

Sorry EHR, I don’t know that much more about them. In the UK they were stocked by Liberty and Sarah Coggles, and the name is Flight. Their symbol was a small bird and items often came with a small feather attached inside.

You mention a company called “Flight” in this article, mentioning that they do a good range of suit separates. I cannot find this company online. Could you post a website or contact details.

Thank you Simon. Could you recommend another place to get suit separates/waistcoats?