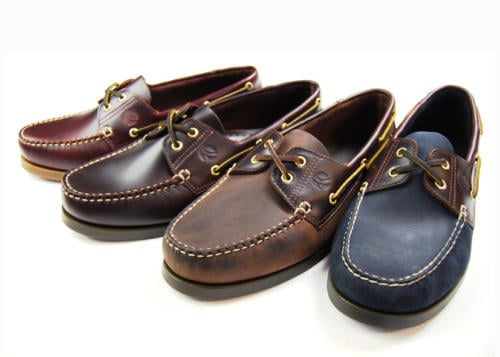 Tom, Hong Kong: Simon, where do you stand on deck shoes? I’ve seen them around and think they’d be a nice compromise between scruffy converse and brogues when wearing jeans or casual trousers. I grew up detesting them for being too boaty but quite like the look of them now.

I know exactly why you have that inherent distrust of the deck shoe, Tom. I have it too.

I don’t know whether this caricature will be familiar to those in the US, but in the UK the deck shoe is synonymous with a certain floppy-haired, rugby-playing, scruffy bloke of wealth. Whether that wealth be inherited or due to “Daddy doing quite well in the city”, the uniform is the same: rugby/polo shirt, oversized sweater, worn jeans and deck shoes. Battered deck shoes. With the laces perpetually undone.

As I have little knowledge of how exactly the term ‘preppy’ is used in the US, I shy away from saying that this character is necessarily that. He certainly wears Ralph Lauren (polo shirt with collar turned up) but there is nothing forward-looking about the style – it is lazy and, essentially, a mimic of everything he sees his peers wearing (as well as his Dad).

This man has no interest in clothes, and this turns me off the idea of a scuffed, maltreated deck shoe.

That prejudice stated, I also dislike the shoe because it seems lazy in itself. The thickness of the rubber sole, the inelegance of its waist and – especially – that thick stitching around the toe. It looks as though someone has wrapped two pieces of leather around your foot and then roughly cobbled them together (no pun intended).

As a result, I tend to like a slip-on shoe more the smoother its toe. I have nothing against the humble penny loafer. It is smoother than some and has done a great many Americans a service. But it tends to be worn by men with little interest in shoes. Not all are, by any means. But most. Worn by men that just don’t like lace-ups, and probably don’t really like shoes.

Driving shoes have thicker stitching, but they can work well as house shoes, as casual shoes – to pop down the road in. I have a pair from Massimo Dutti that serve well in this regard. But the slip-on I favour is smoother – the Harrow shoe pictured is obviously a well-made shoe. The tan Gieves & Hawkes slip-on is even better. I’m not a big fan of tassles, but it is obviously a lovely shoe. Berluti ones are beautiful.

I have a blue suede pair of slip-ons of this type that I bought in Bologna. And they work best sockless, with summer trousers, as many men in Italy are apt to wear them.

As you can see, Tom, this is largely a personal opinion rather than a reasoned argument. But if you want something between Converse and a brogue I would recommend either a smooth slip-on of this type or a driving shoe – Tod’s does some lovely ones in bright colours for summer. And given the weather in Hong Kong you will probably have far more opportunities for wearing them like this than I do.

Hi Simon! I’ve discovered your blog a week ago and I can’t stop reading it since. Keep up with the good stuff. I’ve a question for you regarding your post about the Belstaff jacket you’ve bought. I’ve a friend who is going to London soon and I was thiking of buying one for me. How much do these go for (Belford and Redford)?

Thanks and congratulations on the blog!