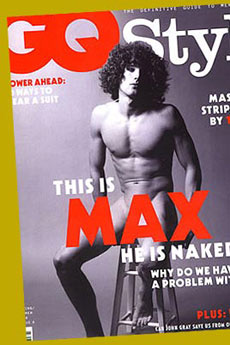 GQ Style is an intelligent magazine. It contains erudite, original writing and is actually what it’s parent publication claims to be: the magazine with an IQ. It does not, however, live up to its own stated ambitions: to be the definitive guide to men’s fashion.

First, the erudition. Many of the articles in Man Alive, the central section of GQ Style, are headlined badly. But they are better than they appear. For example, “Apocalypse Now: Is it just me or is pop music as we’ve known it over” does not bode well (it is too clichés glued together). Yet Simon Reynolds argues convincingly that there is genuinely less innovation in music today, and then proceeds to prove that this doesn’t matter. That it is simply unrealistic to ever expect innovation to be consistent, and that music will benefit from reusing and reviewing old ideas, injecting a little originality every time.

Reynolds points out: “From dubstep to the new folk, a lot of today’s most rewarding music is based around the durability of tradition and the strength of folk memory. Iconoclasm and innovation have been supplanted by veneration and renovation. Interestingly, both ideas of the role of art were active in the sixties.”

Equally, Michael Bracewell’s take on the rise of modern art is both original and lucid. He argues that the attention now lavished on contemporary artists, and the money they generate, has created an “anxiety of influence”, spurring artists on into fresh avenues of enquiry. Rather than corrupt individuals and convince them that just submitting dirty beds will be good enough, “art has seldom been so well read in its own history and cultural lineage.”

So far, so good. But none of the Man Alive articles concern fashion. Or style for that matter. GQ Style begins with a well-written article by Charlie Porter (which inspired my previous blog on enjoying your fashion cycles while they last). But that’s pretty much it. There are several single pages highlighting individual trends – new length knitwear, spring trenchcoats – but the actual writing or insight is lacking. Indeed, each page resorts to random quotes to try an inject some intelligent comment. David Hockney apparently said: “When is the past present? When did the past end and the present occur, and when does the future start?” All very nice cod philosophy, but I’m buggered if I know what it’s go to do with Prada loafers.

There are a few scattered photo shoots, though disturbingly as many of naked men as there are of clothed ones. There is an interview with Nicolas Ghesquiere of Balenciaga. But that’s your lot, and you’ll have to wait several months for the next issue. It’s hard to subscribe to the idea that this is the definitive guide to men’s fashion.

One of the most enlightening pieces is actually by Tom Ford. But it’s about nakedness, not fashion. And there’s a decent interview with philosopher John Gray, by Will Self no less. But so little on actual clothes.

When will men’s magazines get over their desire to try and be about life, the universe and everything, and actually put something together about style?

(For those new to this column, this is part of a continuing search for a publication that covers men’s style intelligently and with the breadth of many women’s magazines. And no, for regular readers, I haven’t got to Borders for Fantastic Man yet. I am excited though.)

Have you searched the magazine Menswear?