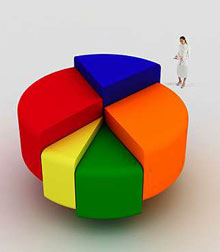 Thank you to all who took the time to fill out last week’s menswear survey. At almost 400 respondents, it was great to see so many involved in a poll of what today’s men are wearing, and what they think about what they are wearing.

There seemed to be an interesting split between a dandified minority and a more conservative majority. On most questions that explored flamboyance or dandification, there was a stubborn 15% to 25% that revealed more adventurous tastes. For example, 27% considered themselves a dandy, 26% said they wear a pocket handkerchief and 13% answered that yes, don wear a bowtie casually.

It is not surprising that the numbers varied a little. Some are always a little more adventurous than others – I myself answered yes to the first two questions but no to the third. But there is a consistency across the answers. French cuffs are not necessarily that adventurous, but they do tend to be preferred by the more dandified – and so the result was at the top end of this dandy bracket: 30%. A minority owns a double-breasted suit (20%); and owns a bespoke suit (25%). Given a rough averaging of the numbers, this dandy minority also owns a minimum of around six or seven suits. (The number of suits also highlights the majority – if not necessarily conservative, at least less expansive – that owns between one and four suits.)

Of course, there is a chance that none of these minorities overlap. But it does seem unlikely that someone would wear a bowtie casually and not consider himself a dandy.

Countries and their historical, sartorial appeal is a fascinating subject. The results support two common assumptions. First, that most people identify with England as a style centre above others. Which is always surprising to most English people, at least those not steeped in its tailoring history. And second, that few people identify with the French, despite its reputation in womenswear (Tom Ford: “French men just can’t dress. They can’t”). The surprise is probably the 29% that pick America as the country they would most like to identify their dress sense with. I think this is testament to the power of Ralph Lauren, Calvin Klein and other US designers that have built up the idea of clean, historically aware American classics in recent years.

Which segues nicely into the branding question, where Ralph romps home. This is testament to the American and probably less flamboyant majority. But most interesting to me was the 14% of people who associated most with Hermes – a brand that does not spend much time or money advertising its menswear. This was my personal choice, but I assumed I would be in the smallest minority. The lesson may be that brand identification can be through ephemeral and more conceptual links than magazine ads and big runway shows. By contrast, the high fashion of Gucci and Prada disappear with just 6% each.

Thank you again to all 391 respondents, and I think this survey should be an annual feature of MensFlair.com. We will change the odd question here and there, but it will be fascinating to see how ideas and responses change over time.

How many suits do you own?

Are most of your suits two or three button?

Do you own a double-breasted suit?

If not, do you think you will own one later in your life?

Do you own a bespoke suit?

Do you own your own black tie/tuxedo?

What proportion of men in your office wear a suit more often than not?

Are most of your trousers flat fronted or pleated?
Do most of your shirts have a spread collar, point collar or button-down collar?

Do most have French cuffs or barrel cuffs?

Do you prefer a four-in-hand or windsor/half-windsor knot? Do you regularly wear a pocket handkerchief (at least once a week)? Do you ever wear a bowtie casually?

Do you prefer brown or black shoes with blue suits during the day?

Do you consider yourself a dandy? Is any of your formal/workwear influenced by seasonal fashion?

Which of the following brands do you associate most with?

Which country would you like to think people identify your dress sense with?

Many assert that style goes in phases, with daywear or office wear being relegated over time to semi-formal wear, and semi-formal to formal. Tails, for example, have fallen through all three stages, and the lounge suit has gone from casual wear to smart office wear today…

If our current phase began in the 1930s, how long do you think it will be before it ends? Before the suit replaces the dinner jacket and ‘smart casual’ replaces the suit?

If one acquired fourteen bespoke suits and wore each suit rotationally (once, fortnightly), factored in four weeks annual leave, wearing each suit 120 days per lustrum (five yrs), do you think they’d last twenty years (if looked after properly)?

Similarly, If one acquired [only] seven bespoke suits and wore each suit rotationally (once, weekly), factored in four weeks annual leave, wearing each suit 240 days per lustrum (five yrs), do you think they’d *still* last twenty years (if looked after properly)?

Look forward to your view,

Hi,
There are a good few other factors to consider I’m afraid – how long you’re at work, whether you’re sitting the whole time, the fabric of the suits etc.
But generally I think the 14 suits have a good chance of surviving 20 years, yes. The seven suits might struggle

Thanks so much Simon, most informative as ever.