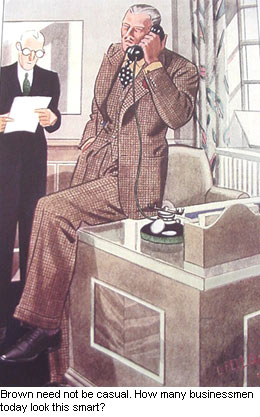 Rule 2: Do not wear brown in town.

It’s worth repeating my maxim from the first instalment in this series: “Rules are there for a reason, but there is nothing wrong with breaking them. These statements are not contradictory. Once you understand the rules, you can work out how to break them effectively.”

So, why does the rule ‘no brown in town’ exist? Because brown was the colour that a gentleman working in the city wore when he returned home, or on the weekend.

During the week he wore black, blue or grey, all in suitably dark tones. Brown was the colour of the country, of tweed and felt hats; of shoes most obviously.

The colours of hats and shoes demonstrate this rule most effectively.

Shoes show how English the rule is. For decades other countries have worn shoes other than black for business without any implied lack of decency or formality.

The Italians wore little other than brown, the French (though fairly conservative themselves) strayed into other colours, and the Americans developed a fondness for oxblood – as well as a love of brown in some areas. 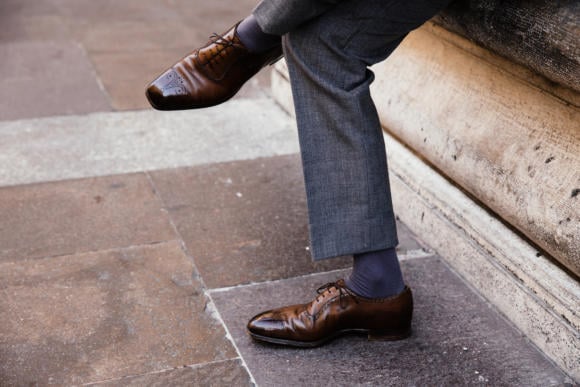 But for the English, business meant black. They were therefore free to characterise anyone in brown shoes as off-duty, casual, and come up with a rhyming code like ‘no brown in town’ to remind anyone who was tempted to stray.

Hats show how practical the rule still is. Even today, most lovers of hats would say they do not wear a brown or green hat for business, sticking to shades of grey or perhaps navy.

In this slightly antiquated item of dress, therefore, the rule continues to be relevant, reminding people that they should treat business with the dignity it deserves (as the Austin Reed maxim goes). 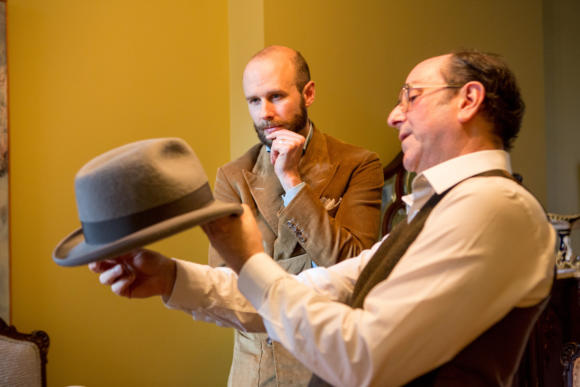 However, the most important thing to realise about this rule is that it is out of date. Brown shoes, suits or jackets are no longer forbidden for business in England, or anywhere else.

It is the spirit of the rule that is still relevant: wear business attire for business.

In any office there will be items that would be considered unprofessional to wear. For some, that would be trainers, or jeans. In my office, unfortunately, the only thing that would probably be unacceptable would be shorts.

That is what the rule means, and understanding it allows you to break it intelligently. Wear brown, but make sure your attire is always and everywhere appropriate to the work your environment.

Simon,
As most know, I am of the English school that black shoes means business, and following in suit that black, blue and grey mean business, not brown. I’ve made that clear in a previous commentary. Nonetheless, this article is well presented, and you make your point on the issue and use of brown. I must say, Alexandre Pope does comes to mind, he said “In words, as fashions, the same rule will hold, Alike fantastic if too new or old: Be not the first by whom the new are tried, Nor yet the last to lay the old aside”
Nicola

A very interesting piece, and I would endorse everything you have said in it. Is there any truth to the tale that the meaning of ‘town’ in this context was even more specific, and referred to the ’square mile’ (ie City of London) only?

Certain business circles have their specific silent codes of fashion.

Some of my observations:
Silicon Valley movers have a Trad variant that has nothing to do with the common casual techie look that everyone has come to detest…

California venture capitalists have their own “niche” look. New York fund managers dress in a specific mode. Some international law firms have the most elegant wardrobes, IMO.

Surprisingly I see more black shoes in Milan than brown, lately. I see more brown shoes among the best placement agents in London than black.

I think the basic rules you mention are general guidelines. The variations are then played with by the leading figures in each of the small circles of business. Think of Gianni Agnelli. He followed the general rules, and broke them in every way he could possibly get away with the specifics. He was a determinant.

And in some small financial circles in Milan, brown suits are the mark of real power…if they are bespoke and flawless. The rest who wear brown are cell phone salesmen…

I hope to merely add to your point that breaking rules involves a lot attention if you are not British and happen to frequent different business circles.–somehow being British gives one a “get out of jail” card–

I think smart is smart regardless of the details and that almost any degree of formality or lack thereof can be achieved with a huge variety of colors.. black need not be businesslike if worn casually.. my most ‘conservative’ suit (besides a black suit) is a dark brown silk single-breasted suit with peak lapels in a subtle herringbone. Maybe this simply illustrates the difference between countries.. I love the perspectives presented in this post.

The rule you are mentioning – No brown in town – makes sense, as brown is one of the colours of the country – few houses and streets in the CBD are brown, so sticking to it leads to more harmonious visual interaction with one’s environment. One of the results of Beau Brummel’s rejection of vivid colours in the city for men – probably partly induced by the emerging Victorian-style austerity movement – led to a concentration on the issues and matters of one’s work, and the scaling back of one attention to the wearer’s outfits. As a professional, the neutrality of the grey/navy etc. suits demonstrates that the wearer does not want to focus on himself, but on the business at hand, with small creative elements preventing dullness in one’s attire. On the other hand, the rule can be broken at times of leisure, especially in parks and outdoors settings, or in certain non – professional industries, where the focus of the occupation is different. And we can, of course, break any rule just to make a statement and to be different – if we have the psychological need to do that – or to follow the salespersons’ desire and marketing efforts to have us spend more money needlessly, as Antongiavanni puts it. No rule is absolute, but breaking it should not be arbitrary either.

I work in the city, and as much as I adore brown shoes, if you wear them to work you look like a tit or a foreigner. Your advice only holds for creatives and some west end hedge fundies.

Dear Simon, what’s your take on the no brown after six rule?

As with all traditional rules, something you should take the spirit of but ignore the letter of.

At night you want to be smarter and that normally means darker tailoring, lighter shirts, higher contrast basically. But you could do that with a navy jacket, grey trousers and dark-brown shoes.

So in your opinion it has nothing to do with artificial lighting, like navy vs. black tuxedos?

No, not really. If anything, a dark brown could look darker than black as well.
It’s about formality and contrast – and it’s nice to be smarter like that in the evening. A friend of my father always wore a white pocket handkerchief with a navy jacket in the evening, even though he’d never wear a hank during the day. It was a touch of smartness and formality

I own a barbour bedale and I wear it in my hometown in Italy. Since barbour is an English brand, I expected to see quite a few bedales and beauforts in London, but in a week I spotted just a person wearing a barbour. Does barbour have a bad reputation in England? Like, is it linked to some kind of “negative” groups of people? Or bedales and beauforts are just unfashionable in England?

They’re actually fairly fashionable now, but haven’t been for a long time – they were associated with slightly posh country types and not cool at all. In recent years theyve become trendy again, but that is probably waning again now

The suit and shoe color rules I was aware of, but not the hats. Having recently purchased an olive felt hat that I adore, I will need to keep this in-mind with pairings. Thank you, Simon.

Hello! Until recently, I myself always wore black shoes. But … this summer I tried chestnut-colored shoes. And I liked her. The color of the chestnut is darker than brown and lighter than black. This color goes well with suits and jeans. Gentlemen, if it is difficult for you between black and brown, choose a chestnut!

“Brown shoes, suits or jackets are no longer forbidden for business in England”
Yeah, you’re unambiguously wrong
https://sourcingjournal.com/footwear/footwear-trends/study-indicates-brown-shoes-suit-will-cost-job-uk-100240/
https://www.telegraph.co.uk/news/2016/09/01/candidates-miss-out-on-financial-jobs-because-they-wear-brown-sh/
https://www.bbc.co.uk/news/uk-37244180
https://www.legalcheek.com/2019/04/dont-wear-brown-shoes-with-a-blue-suit-city-law-firm-partner-tells-trainees/
And many many more articles

Not really – you’re looking at a pretty narrow set of resources there. Finance or legal, mostly about interview candidates. On the other side, everyone I actually know who works in business, or indeed banks and law firms, that happily wear brown shoes. It’s not acceptable everywhere, but then that’s not the point – only that it’s not forbidden everywhere.