The roots of British style in the functional garb of hunting and working in the country are obvious. But one easily forgets the broader and longer roots of these traditions.

So many pieces of modern British clothing originate in country wear. The centre vent and angled pockets of some suit jackets, for example, which consciously ape the hacking or riding jacket. There the central vent was required to allow your jacket to sit comfortably when you rode your horse, and the angled pockets made access easier when mounted, as your legs and lower jacket are naturally thrown forward.

Items like the trench coat, equally, which while not necessarily country garb come from the same tradition of practical British clothing. There the epaulets are required to keep your ammunition or gun sling on the shoulder. And the extra layer of material across the shoulder is intended to help cushion the recoil of a rifle.

With both these items, elements that were originally practical are now there just for style. But it is comforting to know somehow that they are not merely the whim of a designer, that they have tradition and history. 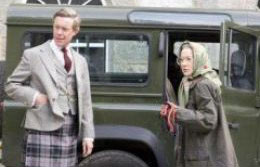 That comfort in practicality was most amply illustrated in a recent episode of the series British Style Genius, during discussion of the Barbour jacket. While well known in the UK, it apparently gained fame in the US after the release of the film The Queen, where Helen Mirren wore a version while in Scotland. Apparently the day after the premier a woman walked into the New York store and asked for “the coat the Queen wore”, and sales of that model doubled.

But the comfort in practicality was demonstrated by a rough treatment of a typical Barbour, driving over it in a car, dragging it round a field and even firing shot at it. Only then did the jacket seem worn in and characterful enough to appeal to the Barbour faithful.
The wide-spreading roots of the English country tradition were demonstrated by an exploration of how other brands, particularly Laura Ashley, have influenced British style. While you wouldn’t necessarily think of Ashley and hacking jackets or trench coats in the same stylebook, the floral prints that originally made her popular come from the same idea – a fondness for the country and all the familiarity and comfort English people associate with it.

Indeed, this is the enduring impression of Queen Elizabeth that was left by the programme. Growing up in a family of country-philes, and without a father from the age of 25, she always felt most at home outside, with a silk scarf around her head and a big jacket wrapped around her. Green wellies, not Kurt Geiger heels.

Country looks go far. Although I live in a city, at the weekend I am usually in a bit of country wear — a tweed jacket, corduroy trousers, a Barbour jacket. It’s a very refined way to go casual, in my opinion.

I noticed that you aren’t allowing comments on your hat post. I’ll comment here. My flat cap is tweed and goes well with the aformentioned Barbour jacket. When I was younger, I wore a beret with a top coat in the winter. Great for stuffing into a pocket or shoulder bag. The fedora and trilby are still hard to pull off on this side of 40, though I try.

Please drop me a line, I’d like to include your pick on my holiday gift guide.

Hi there EAEL. Yes, not sure what’s happening with the comments on the flat cap post. Oh well.

I’d be happy to give you a suggestion for your holiday gift guide. What kind of thing did you have in mind?

Thanks! It’s very open-ended. Picks may be outrageously expensive, incredibly simple, perfectly chic, whatever direction you’d like to take. Deadline is December 5th.

I have seen the website http://www.saddleonline.com while searching internet and it has biggest collection of Horse Saddles, Leather Jackets, Apparel, Harness.

The Country Look is a timeless and classic. The essential piece of country kit is a Barbour Jacket. Although I purchase another last year; I have the privilege of using my fathers old jacket which is a good 30 years old and still going strong; although looking very withered, worn and aged as they should do. My personal favourite is the Northumbria. Strong, heavyweight, and the classic Olive Green.
As for caps, you cannot beat the Tweed Flat cap. Barbour also have a fabulous range, but I own a few varieties from Hackett.

Its great to see iconic programmes such as British Style Genius covered. I watched it myself and thought It was fantastic.

On a final note; on the country clothing aspect; I must thoroughly recommend cord trousers from Cordings in Picadilly, London. They are amazingly warm and comfortable along with many other must have essential wardrobe items.

“A flat cap is the only realistic headgear for those between 21 and 40.”

I don’t think so at all. I’ve been wearing a fedora since I was 24. At first, it was just something to go with my overcoat: I realized that no other hat would go well with an overcoat on top of a suit. Since then, I have gradually come to do what our forebears did: wear a hat every day. I always wear a fedora when I wear a tie (with a suit or jacket, of course), and I frequently get complemented on my headgear. In the summer, it’s a Panama hat; on the weekends, a it’s a crushable (i.e., soft unlined) fedora that goes with tweed, plaid, or a baracuta-type jacket. Sometimes I don my gray homburg, but it has to go with a suit.

Simon, you could definitely get away with a fedora when you’re wearing a suit and tie–and please don’t take that to mean I think you look “old”!

The Country Look is a timeless and classic.