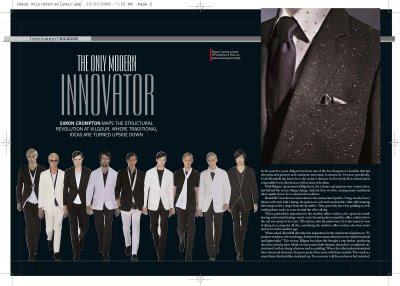 I’ve had a couple of requests for the full version of the Kilgour article I wrote for Spice magazine. So here it is:

In the past five years, Kilgour has been one of the few designers in London that has demonstrated genuine and consistent innovation in menswear. Or more specifically, Carlo Brandelli has been – he is the creative director for the Savile Row brand and is responsible for its direction as well as most of its ideas.

With Kilgour (pronounced Kilg-hour), the colours and patterns stay conservative, but behind the scenes things change. Indeed, they revolve, turning many traditional ideas upside down. It is a structural revolution.

Brandelli’s best-known innovation was the unstructured jacket. Using mostly heavy fabrics with only half a lining, his jackets are soft and comfortable while still retaining their shape as they drape from the shoulders. They generally have less padding as well, making them easier to wear around the office all day.

This is particularly important for the modern office worker, given that air conditioning and central heating mean he rarely wears his suit jacket around the office – which is how the suit was meant to worn (the shirt is, after all, underwear). It is also easier to wear if sitting at a computer all day – something the modern office worker also does more and more in the modern age.

When asked, Brandelli describes his inspiration for the unstructured jackets as: “To produce modern, relevant design. In this era that means that it has to be multi-functional and lightweight.”

This season, Kilgour has taken this thought a step further, producing the jersey stretch jacket. Made out of cotton and a little elastane, this jacket is completely unstructured, with no lining whatever and no padding. Where the other jackets minimised these structural elements, the jersey jacket does away with them entirely. The result is a smart blazer that feels like a tracksuit top. You can wear it all day and never feel restricted.

They’ve been popular, too. They come in grey, black and navy, but a few weeks into the season and the 38-inch chest in grey has already sold out. I know because it’s the size I would have worn and so the one I asked for. Apparently no more can be ordered in time for this season, so grab them while you can. It’s your only chance.

A second piece this season that deserves mention is the wolf quilted jacket. Again, this takes a simple idea like the structuring or lining of a conventional blazer and applies it to an unusual object – here, the padded country jacket. Long a staple of hunting and farming communities across England, and most commonly known under the Barbour brand, this kind of quilted jacket is perennially popular as piece of outerwear.

Brandelli turns that image on its head, creating a quilted jacket with the same lean, soft silhouette as Kilgour suits (and the standard one-button Kilgour fastening). The result is a light casual jacket that is elegant yet easy to bundle up and stuff into your luggage. It has a suede collar and trim, concealed zipped pockets and ribbed wool cuffs. There are a few more of these left, though they are selling fast – last time I looked in the stock room there were about a dozen in navy left, and it’s already sold out at online boutique Matches.

While these two items have received a lot of attention, many of Brandelli’s smaller innovations go relatively unheralded, sitting around the contemporary outlet at No. 5 Savile Row (No. 8 being reserved for the more traditional lines) waiting to be discovered by the casual browser. The odd waistcoats in black and blue wool, for example. These have silver piping, one button hidden in a fly fastening and drop lower so as to fit with trousers worn on the hip.

This last point seems like a small one, but is the kind of crucial detail Kilgour picks up on. The vast majority of men today wear their suit trousers on their hips, not their natural waste (as was traditional). Yet few waistcoats sold today drop onto the hips, leaving a strip of shirt material waiting to balloon out.

Also noteworthy were the loose-weave navy blazers in last season’s collection – so loose-weave they were more flexible that some sweaters – and the high-waisted, very dark blue jeans.

Brandelli is modest but admits that “everyone has been ‘inspired’” by his unlined jackets. And he agrees that few if any menswear brands today are innovating in the way that suits are made and put together. In his words, “designers just stopped thinking”. No brands, certainly in London, produce new ideas in this way for retail, though Brandelli does say that “Maison Martin Margiela and Comme des Garcons used to”.

What influences and inspires him? “I never look at clothes, vintage or otherwise. Usually my references are from my interests, which are primarily art, sculpture and architecture.” It’s certainly easy to see that wandering around No.8 Savile Row, the clean design and bare marble of which was designed by Brandelli himself.

But again you are struck by how little the items are marketed, by the absence of branding, advertising or description of the article you are holding. It’s all there to be discovered, and it rather urges style writers around the world to tell everyone about it. Otherwise you might just miss it. There’s only a dozen of those navy wolf jackets left, after all.

Is the jacket you describe anything like a recent Ralph Lauren suit (I have no idea which label it is) that appeared in a recent ad? It was a charcoal grey that draped just like a wool sweater and seemed to have the same sort of soft, forgiving texture. I think it was a single button, possibly a two button.

Hi AP, always good to hear from you.

Yes, I believe it was similar. The key is to have no lining or padding whatsoever, but a wool mix in the material that will keep its shape.

I believe a few other people now do something similar as well. I have seen one by Etro and a few Italian boutiques do a classic unlined blazer (though this will usually be cashmere and have some padding and structure)

the news is that carlo brandelli have left kilgour, what a shame… apparently, the new owners wants to focus on bespoke whereas brandelli was keen to develop the ready-to-wear (unsurprising, given the reception he got at his first paris show)…

i’m undecided on this, because i actually think savile row should do less ready-to-wear, but yet i liked what kilgour was doing on their ready-to-wear… it looks like it’s time for kilgour bespoke.