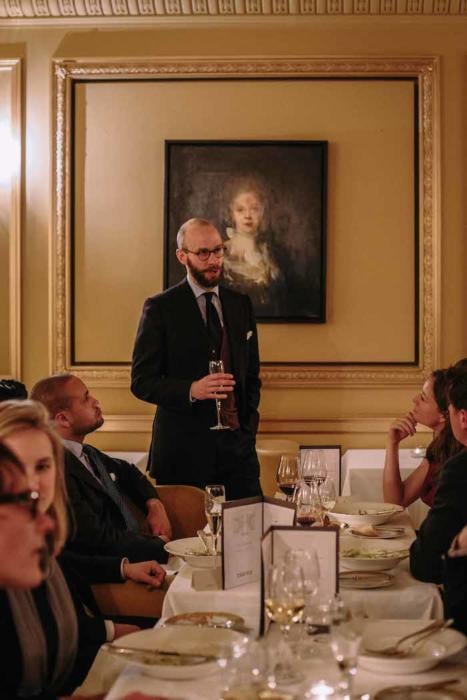 These are the first pictures from our first Permanent Style dinner, which was co-hosted with Essence Lifestyle on Monday at Club Cafe Royal – part of a series we are creating called The Gathering.

It was a really lovely event, bringing together some of our favourite people from around the UK, with a particular focus on young turks doing great things in the world of crafted menswear.

Community, or coming together, was the key theme – as it has been at other recent events. It was interesting seeing Alice Walsh of Alice Made This talking shop with James Deakin of Deakin & Francis, for example. Both make cufflinks and other men’s accessories, but in completely different ways with completely different aesthetics. I believe a visit to the historic Deakin & Francis facility was arranged.

It was nice to hear some of the cutters say how much they liked seeing each other. Davide Taub of Gieves & Hawkes and Michael Browne of Chittleborough & Morgan, for example, get on very well and have a lot in common. But even though they work a few doors apart, they’ve only spoken a handful of times and never at such length.

It turned out that Sophie Gordon of Kilgour and Claire Barrett of embroiders Hawthorne & Heaney went to school together, but hadn’t seen each other in four years. Even Luke (Carby, photographer) had a connection there.

It may be a small world, but everyone is either sitting in a basement or flying back and forth to Italy.

Everyone enjoyed answering your questions by the way – thanks for sending those in. You will see the responses in the official film, which will be ready in a couple of weeks.

Plus of course myself, Luke Carby and the guys from Essence Lifestyle, who co-hosted the evening. Credit goes to the them for the photography.

Really looking forward to the film. Nice concept. Will this be available to view online?

Dear Simon
I have seen men wearing black velvet tang jackets and thought it looked quite stylish. I wonder whether you have thoughts on this type of jackets and if so, whether you know where to get high quality versions. Best, Marco

Yes, velvet can be really nice. Have a look on the site for previous pieces I’ve done on them

Completely off topic. Is it standard practice to dart the front of flat front trousers? Any idea why is this done?

Not all do, no. It is done to narrow the trouser from thigh to hip

Can you elaborate more on types of cufflinks best suited for night wear? I was under the belief that beautiful cufflinks work all the time!

They do, in any vaguely formal occasion. The point here was that the two makers make in very different ways (hand vs industrial processes) and have different design aesthetics (traditional vs modern)

Simon hi.
Great work.
On your recommendation I have again used P A Crowe they’re pressing I think is wonderful. Do you still use them?

I haven’t for a bit, but yes I plan to for pressing. Their work wasn’t flawless, but it was better than anything you’d get from a dry cleaner certainly

What do they charge for the pressing?

Re front darts. Thanks for the response. Have you had personal experience. If so, are you in favour?

It’s about achieving the right fit on the trouser, and that should be the priority. If the tailor says he can’t achieve the same fit without them, you have to go with him on it.

I have several pairs of trousers finished with a front dart, and they have never been added to impact the fit; it is simply a way of creating a small degree of texture to an otherwise flat landscape. Some tailors refer to this as a knife pleat.

Nick, darts on the front of trousers are not used for texture (certainly by tailors). They are there for technical reasons. Pleats on the other hand can be used for design as well as for function.

Hi Simon,
A very nice gathering indeed!
I highly value the concept for its potentials and of course for what I could learn from it on suitable outfits for such an occasion as well. Thus the importance of the pics I greatly appreciate too!
John

What would be the technical reasons?

Hi Mac
Sorry to disagree with you, although perhaps texture is not the right word. They are a decoration, which adds a bit of interest to something which would otherwise just be a plain expanse of cloth.

Hi Anon, I always prefer not to get into cutting technique with those who are buying suits. You don’t need to know why! However, Simon was absolutely right when he stated that it was about having a small waist in relation to the hips.

It can be done without a dart but it’ll be a pretty close fit and the pockets will gape open. Of course, you can always go for brace-cut trs which have a bigger waist. Trust your tailor’s advice. If the trs fit well, let him deal with the stress of how and why!

What kind of waistcoat are you wearing here, Simon?

Mac
I really do not understand your point on darts. It has never been a point about fit with my tailors, only ever a styling preference. “Would you like a dart on these or not?”

That’s rather odd Nick – you’d have to have the cloth taken out somewhere to get the fit right. Maybe it was a question of whether you minded having the dart there? (And I assume he definitely didn’t mean a pleat?)

Hi Simon
I have trousers with single and double pleats, flat fronts and darts. All are agreed with the tailor at the time of commissioning. None are “retro-fit”. I am quite amazed by the idea that a dart makes up for there being an excess of cloth. Never has a tailor implied that there is too much slack in a cut which can be rectified by a dart. Never.

Nick, the point is your hips are wider than your waist. To fit into the waistband, darts or pleats must be used to narrow the top of the trousers. You will find darts at the back that help do the same job, usually running into the pockets

Hi Nick,
The front darts on a coat, for example, are not there for texture or design. They give shape to the chest and suppression to the waist. Without them, you’d be wearing a sack.

It’s the same with front darts on trousers. They aren’t necessary if you have snake hips. If you do have a sizable difference between waist/hips, the darts allow your tailor to keep the trs waist small whilst giving you enough ease over the fronts. I have them on my own trousers. They’re virtually unnoticable. If you want a design feature, I think pleats make more of a visual statement. I wouldn’t ask a client if they wanted darts. That’s a tailoring decision. As Simon is saying, maybe your tailor meant pleats?

Gentlemen
Your comments interest me, but I simply cannot agree with what you are saying I’m afraid. Front darts on my trousers are only ever a matter of style choice and never have any bearing on fit at all; I have many with, and many without, and the fit is virtually identical. It is nothing more than the fact that those with a dart look a little different than those without. They do not serve the same purpose as the darts that create a closer fit around the waist and are commonly use around the rear of the waistband. Pleats and darts are not the same at all. And they simply cannot be compared in any way to darts on a coat. At all.

No doubt your darts are stunning, Nick. Enjoy them to their fullest!

Thank you very much indeed Mac. I certainly shall.

Thank you for your reply, Simon! It’s a lovely match!

“Enjoy them to their fullest”. Was there a clue to the darts purpose there? 🙂

I hope all who gatherered realise that, outside of the advertising environment (GQ, Esquire etc.), there can be few people in the UK who do more to promote UK/bespoke brands and their worth than this site. A bold statement perhaps but backed by the evidence to hand. I applaud your efforts. This being so is there an all inclusive UK industry organisation (SR aside) that addresses clothing, footware, cloth/fabric and accessories manufacturers at the bespoke/luxury level (there may well be but it really can’t be considered to be public facing)? Whilst we excell at quality I believe we (the UK) are behind the Italians in promoting ourselves. You seem, singlehandedly, to be creating such an entity albeit informally. Can I encourage you to consider this as a long term project (amongst your already busy schedule) I can’t think of a better person and I’m sure there would be plenty of industry support.