Good tailors for adjustments to suits, trousers and shirts are not always easy to find. There is a raft of pretty poor establishments dotted around London, staffed by dressmakers or general tailors with no specific experience of men’s tailoring.

For the last few years I have used a small outfit in Mayfair called Atelier Colpani (on Avery Row, parallel to Bond Street), which is where both Etro and Paul Smith send their customers’ alterations. However, while the work has been excellent Colpani has two chief failings: they are not specifically men’s tailors and they are in the West End, while I work in the City.

I was pleased last week, therefore, to find a bespoke tailor nearby that also does alterations: Graham Browne.

Based in Well Court, just off Bow Lane and close to Bank tube station, Graham Browne is a tailor established in 1968. Previously of Little Britain (next to St Paul’s) the firm specialises in bespoke but also does alterations – both are very reasonably priced, with bespoke starting at £790 and my adjustment to the waist of a jacket coming in at £20.

The work was well done and it was nice to see a tailor interested in the work of others: the staff inquired where my jacket had been made. It was the work of Edward Tam, someone regular readers of this blog will be very familiar with. I was pleased to hear that they approved of Edward’s work, and commented that “it is certainly among the best of the work we see out of Asia.”

An inspection of the seams confirmed that it had all been sewn by hand and fully canvassed. The only constructive criticism of Edward was that “perhaps the stitches could be a little closer together for strength.” As I have had the jacket for two years and heavy wear has produced no failed stitches, they seem to be working pretty well (no pun intended).

For those interested in Graham Browne’s bespoke work, all the measuring, cutting and pattern making is done on site. The sewing is done by a team in north London. Graham Browne has also been involved in making tweed cycling suits using the innovative material developed by Guy Hills and Kirsty McDougall of Dashing Tweeds. 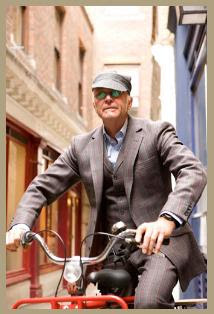 The latest example of a suit in this material can be seen on the Graham Browne website (and is pictured above), a suit for Gary Fisher – the founder of the cycle company of the same name.

While I was in the store I also saw a thick shirt-jacket in production. Entirely unlined but of a thick tweedy material, it is affectionately referred to by the staff as their lumberjack shirt.

I concur. There are a number of garments in my wardrobe that could use some alterations but I’m a perfectionist too scared of facing dismay as a result of poor craftsmanship by a tailor. It’s a bit like visiting a barber, there is high risk involved and limited near zero room for correction. The only alteration experience I’ve had so far was at Brown. I purchased a pair of Dior Jeans what I wanted a narrowed because of my skinny calves. Then I wanted a pair of my other one size larger Dior Jeans, to match the dimension of the new Jeans. To my surprise Brown’s tailor did a magnificent job with no traces of alteration what so ever.

hi simon, i recently bought an off the rack blazer and was advised to have alterations made but to only one sleeve to shorted slightly as the saleman said my arms are different legnths! is this normal?

if they are wrong about this would i be able to let that sleeve back out (they are working cuffs on the blazer even though it is RTW)?

Yep, normal and yes, they can come back

ah fantastic simon. sorry for the amateur qs but but was a little disconcerted to be told that one of my arms was a different legnth from the other! rups

I’ve been following your blog for a couple of years now and have introduced some of your excellent recommendations into my wardrobe.

One of the areas Permanent Style stresses particularly on is fit, especially in suits. In light of this, although I’ve never used a tailor before, I took two of my suits (Armani and Balmain) to Atelier Colpani (“AC”) (after reading about them on your blog) driven by a desire to find an excellent fit. Although I appreciate you haven’t seen the suit, I assume you are otherwise familiar with the work of AC and the advice needed is also somewhat generic:

– the Armani suit jacket has been taken in at the sides order to give it a slimmer silhouette, but it now looks at odds with the width of the arms – which appear more billowous.

In your view, is it worth reverting to the original shape in order to save further aggravation with the fit which, for the most part, was good or is it best to press on with AC’s recommendations? I have little experience on how to manage tailors to ensure that we share the same end product vision. In short, when should we cut our losses and move on?

Thank you in advance for taking the time to consider this matter.

I’m pleased the advice on fit has been helpful.

I wouldn’t start altering things like the sleeves, definitely not. You’ll only find something else that needs to be changed. The balance of a jacket is a very delicate thing, and it sounds like perhaps you have taken in the jacket in the waist a little too much…

Simon! Buying a RTW option from Drakes or buying a bespoke jacket from Graham Browne where the potential for fit may be greater! Which would you go for?

Simon Crompton
Reply to  Ian A

It’s about priorities and what you want it for: Graham Browne would donate better fit and make, but they couldn’t do the softness or style of Drake’s

You have a genuinely brilliant blog and I follow your advice closely. At your recommendation I tried Atelier Colpani and I’m afraid to say the experience has been a particularly poor one. It’s not just the workmanship (I’ve needed to visit them on multiple occasions to correct garments since they couldn’t quite get it right on the first occasion) but regrettably their attitude isn’t much better than their general workmanship either.

Oh dear, sorry to hear that Mahmood. I won’t recommend them again.

If you want another recommendation, I’d suggest Pinnas & Needles in Soho

Hi John, If you are storing winter cloths away make sure to protect with moth deterrents most important. Dry cleaning will remove any oils grease food stains which the moth is attracted too. Maintence is the key to protect your investment in these garments.

Video: Maintaining and caring for your suit

Subtle vs showy: A way to think about casual clothing