My first, baste fitting for my bespoke suit at Graham Browne today. While I’ve had fittings at this stage previously with my Hong Kong tailor, this is the first time I’ve been able to ask as many questions and probe the details of this process.

The first image shows what the chest area of the suit looks like at this stage – the wool folded over with a generous inlay, lined with just the body (horsehair) canvas. The fold is held in place with long baste stitches and the sprouts of thread at the edges show where the mark stitches were that were pulled apart (see previous post here).

The second image shows the collar of the jacket. While there isn’t an actual collar attached, just over an inch of excess material is left above the neck (shown by mark stitches here) to simulate the collar when fitting. 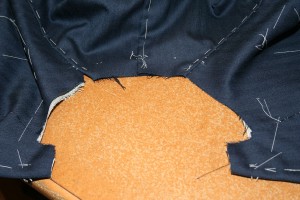 Sewing together the jacket panels for this fitting only takes a couple of hours – which makes you feel slightly better when they say the whole thing will be ripped down into its individual components after the fitting, repressed and entirely re-cut.

This is one reason the amount of inlay left over at the edges is so generous: it allows significant reworking of the shape to be done after the baste fitting. As it is an investment suit, though, there will also be inlay left in the suit after it is finished – so it can be altered in the future. Bespoke will nearly always leave greater inlay here than ready-to-wear (which is always keen to shave off any extra costs).

In the third image the jacket is on and the lapels have been pinned back into position. Russell is examining the line of my rather rounded and sloping shoulders. Note also that only one arm is attached – the left. Only one arm is needed to judge the length and pitch of the sleeve, unless the initial measuring established that the client had one arm significantly different to the other.

The reason the left arm is attached and not the right is that it’s just easier. A sleeve is always sewn on starting at the front and working around to the back. This is because greater fullness (the difference in length between the sleeve and the armhole) has to be worked in at the front. A right-handed tailor works away from himself when attaching the left arm, therefore, but has to sew in reverse when attaching the right arm. So only the left sleeve is attached at the baste stage.

One of the most important things to discern in the sleeve at this fitting is its correct pitch (how it hangs in relation to your body – a little forward, a little back). If there is more material in the back of the sleeve, it hangs forward; more in the front and it will hang further back. The tailor makes a chalk mark on the jacket where your arm is hanging. Apparently my arms hang a little further back than average. Who knew?

It also hadn’t occurred to me that men tend to hold their arms unnaturally far back at the fitting – in the same way as they stand up too straight, as if they were on parade. The tailor has to make his customer relax in order to stand naturally, one of the favoured Savile Row methods being to tell a particularly ridiculous joke.

In the fourth picture that left arm has been stripped off and the shoulder seam is being uncut. Seeing the pieces being ripped apart is rather satisfying, and does make you feel like this length of cloth is being sculpted to your body; the measuring and cutting is rather abstract by comparison.

The shoulder was re-cut because Russell was not happy with the way it was lying, creating a little too much excess material across the chest. So the back and chest panels were pulled up and pinned again. Note also that the shoulder pads are not sewn in, just inserted and held there underneath the jacket during the fitting.

In the last picture you can see how the shoulder has been re-pinned a little tighter. You can also see the original chalk marks, now rather faded after all the work that has gone into the cloth, and the edge of body canvas and shoulder pad sticking out in the foreground. There are also small folds in this new shoulder line – where a slight excess of material will throw a little more fullness over the back. 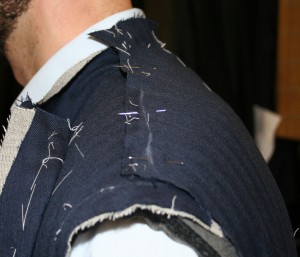 The next (forward) fitting will be in two weeks time, where the largely complete jacket will be ready. Though it is still possible to alter a lot at the forward fitting, the tailor will try to minimise this as that construction takes around eight hours – four times as long as getting to the baste (or skeleton) fitting.

Oh, and I went for a deep green lining.

Once again, that fabric is going to make for a beautiful garment.

Is this going to be a 2-button double breasted, as you’be spoken of in the past, or will it be a more traditional 3×2? For that matter, what is the true difference, aside from the aesthetics of the buttons themselves?

It is to be a traditional 6×4 (six buttons, four of which look like they are fastened). I think some variation is needed on the other, more original look.

I think the biggest difference is the buttons, and how cluttered/sleek that can make the jacket, and the length of the lapel’s sweep to the waist.

Thanks for the info.

I’m having my first double-breasted made to measure in the next couple months, and am gathering all the input I can.

Thanks again, and great job with the site!

Thank you for sharing this with us–it is highly informative.