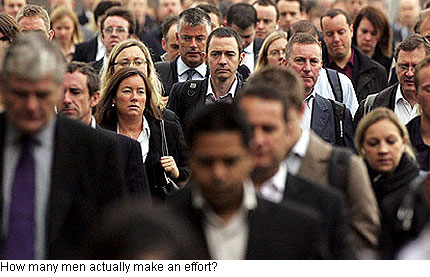 My colleague Olly Watkins has become more and more interested in traditional menswear and permanent style in recent years. His journey, and the lessons he has learnt along the way, provide interesting perspective for new devotees to permanent style.

Simon: When did you first become interested in clothes?

Olly: Well, it took me a while to get over the bottle-green corduroys my mother made me wear when I was eight-years old.

But by the time I was a teenager I was interested again. And being a child of the eighties, a sharp-cut suit was everything. I didn’t own one for ages but that was the aspiration. I was never terribly interested in casual clothes or in fashion. I just wanted to wear clothes that fitted well and match colours without looking ridiculous.

When I first started work I tried to wear suits and was interested by the idea of tailors. My father used an old City tailor and it was fascinating to talk to him about tailoring and traditional City style.

But that interest remained a minor one?

Yes. I tried to dress well but I never really delved into the kind of questions that were centrally to improving that – why do none of my jackets really fit me? What are the limits to having alterations done? Where could I have one made? It was a frustration with men’s retail really.

And that changed recently?

Yeah, I always used to wear suits, but as the dress ethic in the office relaxed over the years I became more and more casual. Then recently (it may be the onset of old age) I got frustrated and decided to smarten up a little. Like the benefits of a school uniform, I wanted something smart and formal that if anything would take less thought in the morning.

But it really took off when I discovered the whole mini-culture around men’s clothes, the traditions (not rules!), the web sites and the community. It was amazing. So many people talking about something which is largely forgotten today, in an age of high fashion and transient trends – where people walk around in the most terrible outfits just for the sake of looking like other people.

What was the biggest revelation for you?

Just how many people are interested in this area, the whole culture around it. Looking around at people, in whatever city, it’s easy to think that no one cares what they wear at work. I commute in from Essex every morning, and you see legions of men in black, blue or grey suits, with the jacket undone, tie loose and obviously not interested in their attire.

If you look back at pictures of US presidents or other politicians in the past, they are all smart, they all have pocket squares. It was something that men took pride in. That doesn’t happen anymore, so I was surprised to find so many men involved in this area so passionately, that do care.

I really like that niche. It gives you something to follow, in an area that suits me far better than squeezing into a pair of skinny jeans and a t-shirt that isn’t quite long enough.

Probably the thing that fits me best at the moment – my midnight-blue dinner suit that I got from A Suit That Fits. I love wearing it, it fits me much better than anything else and is probably better made as well. I just feel better in it. I didn’t realise that it was almost impossible to cater to my proportions in ready-to-wear clothing, even if altered. [Olly has a 46-inch chest and 36-inch waist: a 10-inch drop that is far above the ready-to-wear standard of six inches. See link here]

I’d wear that with thin-soled, black-calf Oxford toe-caps – I have yet to be converted to pumps or patent leather. And a white shirt, white braces, bow tie and gold cufflinks to match the gold clips on the braces. Oh, and a white silk pocket square.

The cummerbund or waistcoat is essential, I suppose, but I find that the trousers are cut so high that they prevent any shirt showing below the waist button anyway, to the end of the bib of the shirt. It seems a little odd to me to wear a cummerbund that just goes over the trousers entirely. That’s not to say I wouldn’t wear one, just that I don’t at the moment.

Obviously the theory is to cover the waistband of the trousers. But I suppose if the waistband is clean and smart, and the shirt is not exposed, you could argue that the cummerbund’s place has been superseded.

Yes. It just seems a little pointless to me. I suppose it’s a rule that I have learnt how to break, as you describe on the blog. I understand why it’s there and so have broken it sensibly and with full knowledge of the outcome.

Love the site, it’s one of the first things I check every morning when I get into work, even before my emails. That being said can you list/recommend other mens fashion websites as well, preferably one’s that have pics so we can actually see different looks. Right now the only two I know of are yours and THe Sartorialist, which is also an excellent site. Thanks for your help and keep up the great work.
Kevin

Hi Simon, just want to share my experience. Having grew up in Jakarta, I was never a fashion fans, let alone a keen observer.

But as I started working in the big multinational company, I become a little more attentive with what I wear.

About 8 months I’d accidently stumble on your articles, and fall in love with it, but perhaps more importantly I fall in love with the traditional gentleman fashion that you and other contributors in this website so vehemently promote.

Two years ago I only have one 3 buttons black suit, that I wear occasionally to the wedding. Now, I have a decent collection of some essentials such as mid grey, navy blue, dark grey and pin stripped dark grey, all in two buttons, and personally tailored for me (although its not yet of a bespoke quality – its really hard to find bespoke in Jakarta), hence the cut falls beautifully on me. And more than a dozen of ties, and dress shirts, that were more than enough to accompany my – not so often “formal/business dress” occations.

As it’s really difficult to find a decent quality – classic english style shoes in Jakarta (those of classic oxford, cap toe, wing tip and even monk strap – sadly for some reasons, moc toe is much, much, much more popular in Jakarta), I have yet to start building my shoe collections. So far I have to content with entry level and less known brand such as Mario Minardi, but I certainly aim to upgrade, once I have time to go to Singapore or HK for better choice.

Now I’m glad that I stumbled on your article that day, and I’m still immensly enjoying reading your article and learn new things from you, other contributors, and other readers in this website.

You might also want to look at A Suitable Wardrobe (http://asuitablewardrobe.dynend.com/), which is one of my daily reads along with Simon’s blog.

Just FYI, I found this article here as well http://paulstyledesign.blogspot.com/2009/08/interview-developing-love-for-clothes_11.html (I know yours is the original!)

I don’t know why, but that chap is recycling content from all over the place without credit.

StyleS, many thanks. I see he has also taken a post from your site. If you know how to contact him or have any other details, please tell me.

As far as I can tell his name is Paul Trone. His main site is here – http://paultrone.com/home.html – though it doesn’t have an email address there is a contact form. It’s a very peculiar situation, though has reminded me that I really ought to read your blog more!

Thanks EJ, I have left a couple of comments but not sure how else to contact him.

If you hear anything else (or any readers of this site do) please tell me.

If people want to use my writing it would be nice if they asked.

really loving this site.. only found it last night, and already i’ve ordered some Gammarelli socks, and had my burgundy cords taken up at my local tailor. Its an addictive game this!!

In the process myself of building a wardrobe based on classic pieces. E.g. a tan brogue, an oxblood derby, black oxfords etc. And most recently have found a love for tweed, so going for the country smart look has been great fun.

Will bookmark this site and return often. Good work.