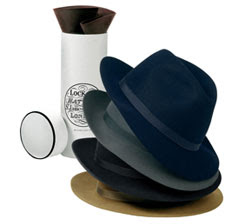 I’ve wanted a proper hat for quite a while. But two things held me back. First, it’s an unusual item for a young man to wear today and stands out. Wearing it well would require careful balancing with other clothes and some nerve while I got used to it. Second, I have a rather long head (dolecephalic) requiring any hat to be large and making it hard not to overwhelm my face and shoulders. Bike helmets just look silly.

If I was to wear a proper hat, most likely a trilby or a fedora (generally speaking, narrow or wide-brimmed respectively), it would have to be casual enough to wear with jeans and a shirt as well as a suit. So probably a soft, brown felt, with a narrow ribbon and minimal bow.

I’d looked around for a few years without much enthusiasm. But then a chance encounter in Madrid a couple of weeks ago turned my fortunes. Like many European cities, the best menswear shops in Madrid specialise in selling English style to the locals. This one had Hackett shirts, Drake’s ties and Penhaligon’s perfume, alongside the standard woven belts and driving shoes. But it also stocked Lock & Co hats, and the Voyager Sombrero in size 7 3/8 seemed to fit the bill perfectly.

I waited until I could go to Lock & Co in London, finally getting over to St James’s Street last week. Retail manager Andrew Baselgia was immediate and exact in his analysis: ‘you have a long head so you need a larger size, but the brim needs to be smaller to avoid it overbalancing you,’ he said. He went straight for the 7 3/8 Voyager (there’s no Sombrero suffix in the UK) when I said I wanted a soft, brown and casual hat. It looked (300) great and, to be honest, I felt a little ashamed that I had put off buying a hat like this for so long. Perhaps it had more to do with social norms than I would have liked to admit.

The Voyager also rolls up for travelling abroad, which is perfect for me when going away for business. You just have to push out the crown, fold down the brim all the way around, and gently fold the hat in half to form a concave curve. You then roll that curve up, making it much easier to carry and store.

Though to be honest, I’ll be taking quite a bit of pleasure in storing it at home in the distinctive Lock white hat box that came with it.

Notes on actually wearing the thing to come later in the week.

Congratulations on your hat! I’ve stuck to flat caps for quite some time (called a ‘cheesecutter’ by a Scottish friend for some reason, any ideas?) but a recent gift of a heather grey/olive fedora, along with the encouragement of friends, pushed me to risk what you might call a ‘proper’ hat. What a wonderful item! Please post pictures of your recent acquisition – I’ve come to think that it’s something a younger man can wear well without appearing either ironic or inappropriately aged.

What hat would you wear when in the countryside (other than a tweed cap)? I’m thinking of ordering something in the style of an Akubra (medium height crown, 8cm brim, doubleweight beaver felt in dark green or brown, narrow ribbon) from Optimo but would much appreciate your thoughts.

I think that sounds nice. I wouldn’t wear a tweed cap, and would just wear a beanie or a more casual version of a brimmed hat, like that Optimo, with the choice depending on formality. I would also sometimes wear a baseball cap or a suede cap

The triby on sale in M and S would have been perfect for ou.Its 16 pounds. I bought a gangster style hat at the shop you just wewnt to, I had it made to measure, never wear it.

A sound investment. I have a Borsalino weatherproof/packable that has travelled the globe with me. (And about eight more hats in the closet.)

Yes, they take some getting used to and the first few trips out the door you will feel conspicuous. But once over the hump, you’ll never look back.

Its really difficult wearing a hat.I had mine made and it was very expensive but you stand out too much in one

Nice hat, Simon! If you ever have the pleasure of visiting Chicago, Optimo Hats (www.optimohats.com) makes the finest bespoke hats in the world. It takes about 5 weeks to make a beaver felt hat to a customers measurements and material specifications. My first one should be ready next week. Can’t wait!

well seeing as London has the finest hat ,makers in the world I don’t think he needs USA stuff although the hats on sale inMillers are nice. But as I said wearing a hat makes you look like a dope especially if the hat is a very fine one like the one simon is getting.Mine cost a lot but unfortunately this is not the era of hats.Its also a forced fashion these days.I love hats but there you go.

Congratulations on finally taking the plunge! I have been a daily hat wearer for years, and while I’m a bit older than you, I started young. Like you, my head is also long and thin, but over time, hats will shape themselves to your noggin. You can also wear them in the rain to speed the process.

While I do get the occasional odd glance while wearing a hat, I mainly get compliments. Given that young men are more interested in suits and ties than their parents, they may just take to wearing hats, too.

Here’s what it boils down to: are you man enough to look & feel good, regardless of what’s fashionable? If so, then man up–and don a hat!

hi simon, could you recommend things to wear with a classic brown trilby? ive seen it worn with a suit and a tweed jacket, but could you wear it with a classic blue blazer & grey flannels for example without it looking out of place (guess this is perhaps a more summer look so perhaps would be out of context, not really sure)?

Absolutely Andy. The only thing I would say to not wear it with is a dark suit and black shoes…