A friend of mine started investing in good shoes around six months ago. I find it reassuring that I get such vicarious pleasure out of it: perhaps I’m not as self-centred as all that.
His first pair was a lovely set of mid-brown, cap-toe Derbys (above). It was a perfect first purchase – adaptable to casual wear, around the office and business meetings, with jeans, chinos and suits. Apart from charcoal they went well with all his suits, both grey and blue. I had a small role in this decision so it was a relief to see his delight in them.
(As well as his near-obsessive interest in polishing and general maintenance. This was a man more used to wearing trainers that only looked scruffier as you wore them. Little did he realise the pleasures of looking after leather shoes, restoring them and creating a personal patina.) 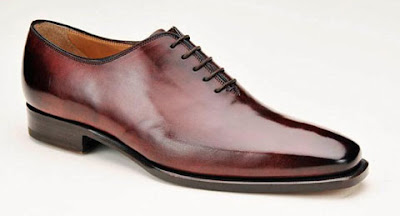 For his second pair, he was tempted with brogues in pale suede. But in the end opted for Oxfords in a hand-painted oxblood (above). Darker, sharper and smarter, they will go well with dark denim as well as blue suits, while retaining a little individuality.

Finally, he mentioned to me that his next investment, sometime next year, will likely be black whole-cut Oxfords. He already has one pair of black shoes (though not of the same quality as these others) so black was not his first choice. But he recognises that black is an essential for business in Britain, as well as elsewhere. So they deserve to be the next pair. 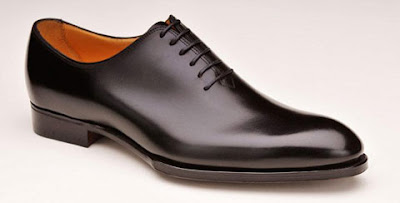 This seems to me like a great trio of shoes. Each will probably only be worn once a week, as the office is rather casual, so rotation won’t be a problem. Brushed after each use and stored with shoe trees, they should be the foundation of his smarter wardrobe for years.

I can see them in my mind, sitting proudly in a row. Perhaps that gives me a little too much pleasure. But having introduced him to the world of classic footwear, it’s great to know his non-work wardrobe now has a grown-up option, alongside beloved trainers. And at work he will look far more professional.

Indeed, it reminds me of a question another friend asked a few months ago – what to invest in when you begin working, and want to steadily look more serious, professional and ambitious? My top three would be:

1 – A suit that fits you. Good material tends to wear better rather than look tremendously better. So buy an inexpensive suit and have it altered everywhere so it fits.

2 – Buy decent shoes. This isn’t hard. In the UK just buy Loake, Barker or Cheaney to begin with, look after them well and trade up when you can.

3 – Buy good ties. Cheap ties look cheap. Get good ones, again look after them well and make sure they are tight to your collar.

Those three things will change your look from graduate to junior management. Buy shirts, socks and expensive suits later.

[The shoes shown here are from Lodger, before someone asks. Apologies to readers who are sick about me carrying on about the brand – but it was my friend’s choice not mine!]

You can follow the discussion on Building a shoe collection – the pleasures! by entering your email address in the box below. You will then receive an email every time a new comment is added. These will also contain a link to a page where you can stop the alerts, and remove all of your related data from the site.