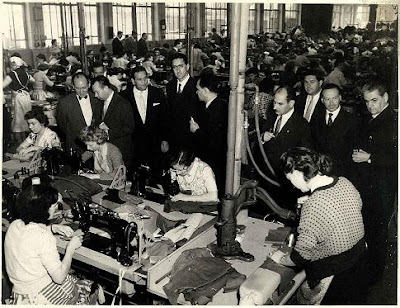 As an Englishman interested in classic style, it strikes as a particular shame that the industrial manufacture of clothes has suffered so much in this country. Leeds used to be world famous for its suit production, for example, a natural home for the industry being so close to the mills of Huddersfield. And while England still has some of the finest tailors in the world and punches well above its weight in fashion design, domestic manufacturing is a woeful hole.

It was fascinating, therefore, to meet Toby Luper this week. Now a visiting tailor, Toby’s family used to run the biggest suit factory in the country: Black and Luper of Kirkstall Road, Leeds. Back in the 1950s the factory, run by Norman Black and Stanley Luper (Toby’s father), employed hundreds of workers and made thousands of suits for Burtons and Burberry, amongst others. Largely made-to-measure garments, the workers spent their days tending the machines – though there were always tailors on site to correct any mistakes made in the process.

It was the loss of the Burberry raincoat contract in 1991 that triggered the factory’s demise. Having begun his career selling his father’s excess suits from a warehouse in Leeds, and later joining the company proper, Toby tried to rebuild the family business under the name Executex. When that didn’t work out, he turned to personal tailoring.

And while much of Leeds’ business elite now wears Toby’s suits, more than half of his business is now in London. Coming down once a week, or whenever clients request it, Toby visits bankers in their office or uses the Holland & Sherry fitting rooms on Savile Row.

Bespoke starts at £1,850 and made-to-measure £550. The former requires a paper pattern, cutting and sewing by hand in Leeds. Toby brings all his suits to London for fittings (though preferring just the one, forward fitting). The latter is fitted here but made by a company in the Czech Republic, one that Toby’s family has worked with for more than 20 years.

Toby is not only enthusiastic but fastidious about his work. Our half-hour conversation included a debate on pre-made shoulder pads, the merits of a basted fitting and how many men would notice the difference (at first blush) between made-to-measure and bespoke. Sadly from my perspective, but perhaps fortunately for them, the answer is not very many.

There was time for a little reminiscing about the days when England was a clothing powerhouse, though. Like the work ethic his father instilled in him. The first day Toby joined, his father made him sweep the warehouse, so that he always had a riposte if an employee refused to do it. Sounds fun.

There are still factories in the UK who make RTW and MTM suits. Your friend Toby choosed to make in the Czech republic because he wants fatter profit margins, not because he can’t it done in the UK. It’s rather sickening that he uses UK manufacturing “cred” whilst running off to foreign counties only to make more money than he would make keeping it local. I have decided to make less money and keep it local to support British workers and craftsman ship. Your mate Toby has decided NOT to do this whilst bragging about his heritage. Not cool.

Thank you for the comment. To be fair Toby has not told me that he cannot make RTW or MTM suits in the UK, he just prefers to in the Czech Republic. And as long as he is open about that and people know what they are buying, it’s the consumer’s choice.

As a consumer myself, I don’t mind where something is made. The quality is the only thing that is important to me. Others certainly feel differently.

Of course Toby can make wherever he wants. What is distateful is the whole notion of Toby trading on his family’s roots in British tailoring and using that as a not so subtle marketing pitch while he runs off to the Czech republic to make his clothes. English clothes are made in England. Toby’s clothes are “English style” clothes made somewhere else.

Just to clarify, the bespoke is all made in England, in Leeds. Only the MTM (not the majority of the business) is made outside the UK.

Hello
I think you will find a lot of this gentleman’s suits are actually put together by a rather well known group of professional tailors in a workshop in Crewe, Cheshire.

My apologies, I’ve confirmed with Toby that this is correct. They use Cheshire Bespoke – so in the UK but not personally controlled.

I have made to measure and bespoke suits and I understand the difference between them, but if I wanted a suit made in the EU then I would go there for one.
This interested me further as I have recently purchased two MTM suits from a company who have a retail shop in the Westfield Centre in London called Suit Supply. Not the kind of place I would normally shop but I liked the look of a fabric on a suit in the window.
When I enquired about the price I was told £349 for a two piece MTM. The cloth was from a Holland and Sherry book. I of course asked where it would be made and was told this Cheshire Bespoke place.
I ordered two suits (the latter was also a H&S fabric of a Super 120’s cloth at £399) and as you ordered two you got an extra pair of trousers free of charge with each suit.
So two MTM Holland & Sherry cloth suits with extra trousers made at Cheshire Bespoke in the UK for a total of £748 total.
They sent a tailor to my office to measure up and deliver the suits, I have to say that the figuration was excellent and they made only one small adjustment around my seat (which they do at their workroom in store) and I am incredibly impressed by the quality and service they offered.
I would recommend them and at a certainly cheaper price than this Toby Luper is offering at £550 starting price for a two piece made abroad, it has to be worth a go I would suggest.
Clearly there are visiting tailors who know what to do and how to do it, that use UK cloth and UK production, I do of course understand that they are a bigger concern than Mr Luper and probably get better pricing (or just dont make so big a profit on every suit they sell) but if the service and fit and cloth is good and they come from the same place as his bespoke suit do, why would you not?
In an economy such as ours even I want to save a few hundred pounds at a time, so go to Suit Supply over the likes of Mr Luper would be my firm recommendation.