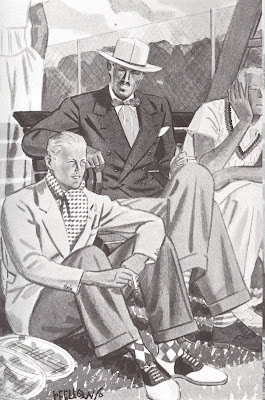 The court dress of the good American

Esquire, July 1935: “It may be different with debutante sisters and daughters, but as for the male of the American family, jubilee year or no, this is the only court dress he knows.

The players’ costumes are self-explanatory. Of the two spectators shown in this scene, the younger is wearing the popular combination of single-breasted linen jacket and grey flannel slacks, distinctive touches to the general effect being afforded by the light-weight wool muffler of wine and white hound’s-tooth checks and the diamond pattern light-weight hose. The hound’s-tooth muffler is a prime fashion feature at the moment. The shoes are white elk with black saddle.

There’s nothing like the end of a warm day, wearing linen and, as the temperature drops, winding a wide scarf around your neck. That’s what I imagine the young man here is feeling. He’s also deciding that the diamond socks and saddle shoes together were a step too far. His father agrees.

His father says: Lose the damn saddle shoes, but keep the diamond socks.

” .. He’s also deciding that the diamond socks and saddle shoes together were a step too far. His father agrees. ..”

Yes, and as one can clearly see, Pater is about to deliver a right jab to the the boys head while his brother stifles a Munchian scream