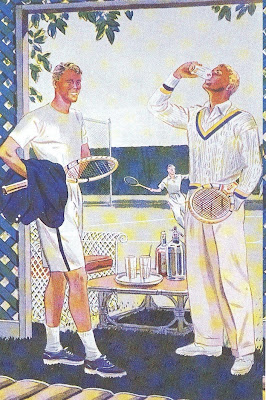 On the trail blazed by Bunny Austin

Esquire, August 1935: “White duck shorts, introduced by Bunny Austin, have been seen in increasing numbers at important tennis tournaments over the past two seasons. Without the famous little Englishman’s sponsorship, it is doubtful that the fashion would have gone very far, but you may wear the outfit shown at left without qualm for its correctness in this usually tradition-bound sport.

The shirt was originally developed for squash, but has been borrowed for tennis. The shoes are the new blue canvas sneakers that have been taken up by many well-known professionals. The blue flannel blazer may be worn at the courts, and with white or grey flannels for general country usage.

OK, I was at Wimbledon this week and every player was basically dressed like the gentleman on the left: T-shirt, shorts, white socks and trainers. Except, hang on, the T-shirts at Wimbledon usually had colllars and the trainers were white. Standards today are so much higher than they were in the 1930s. Bunch of ruffians back then. Blue canvas indeed.

These days, present company excepted, the ruffians are the spectators. How were you dressed? Piccies please.

wimbledon was certainly better then.
have u been to avery row ? if so whats cookin?

No piccies of the day I’m afraid, but I can give you a line-up of the outfit: blue SB hopsack blzer, pale grey flannels, blue Bengal stripe shirt and charcoal wool tie (Panta, as featured here previously). Worn with the tennis shoes from a few posts ago. And a white linen handkerchief.

But then I was in the members’ enclosure, so jacket and tie required. Not sure I’d have worn a tie otherwise.