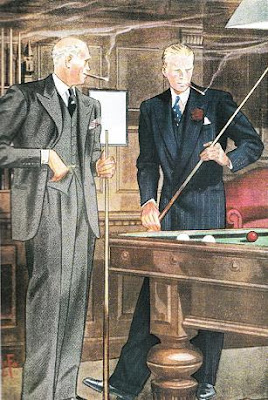 Before the game gets down to braces

Esquire, February 1938: “This father and son contest has apparently just begun, to judge from the length of their cigars and has not yet reached that coat-divesting warm-up stage which would reveal the players stripped down to their braces.

You just know they wear the latter, however, as there’s no other accounting for the perfect hang of the trousers which, while permitting an easy, natural break above the instep, are yet hiked up so trimly about the, as it were, breech as to assure the wearer against ever being classified as a droopy drawers.

The suit on the left is a sharkskin cut in a single-breasted peak lapel style with the British blade effect of extra fullness at the shoulders. The other is an unfinished worsted four-button double-breasted, worn rolled to the bottom button. Note the unflapped piped pockets on both suits. Also note that both men wear the currently favoured white starched collar with a striped shirt.”

Without getting into a long discussion here, I have a bespoke suit with braces and I find them both uncomfortable and unattractive – the latter precisely for the moment decribed here, when one removes one’s jacket. Of course, if a man always wore a waistcoat it was not a problem. Elsewhere, I love the sharkskin three-piece and that might suit well a grey commission that is coming up in November. I’ve never taken to bird’s eye and I already have a herringbone. And if I were ever to have a bespoke shirt with contrasting collar, the body would have a faint stripe, as worn here. So much subtler than a plain colour.

Unattractive is of course a matter of taste. Which may be a result of the 1980s Gordon Gekko ‘power braces’ factor. Your ‘logical waistcoat theory’ ought to solve the problem of visibility. For me it’s a sleeveless or ordinary pullover, or knitted waistcoat in more casual situations.

As for discomfort, I think it may be a matter of getting accustomed to braces. But only if one really wants to wear them; there is no pressing need since most belt-cut trousers don’t suffer from ‘droopy drawers’ syndrome.

I have worn bespoke suits with braces for over 20 years because i find them infinitely more comfortable and the trousers hang much better. I was always taught that a proper suit should never have a belt, but I prefer the fit with braces, as opposed to side adjusters.

Side tabs with adjuster tabs and/or buttons solves the problem. I have a Chittleborough and Morgan suit I picked up secondhand with adjusters with buttons on the side. It gives a decent range of waist sizes, one of which fits me perfectly. I can wear them relatively high waisted without any droop. It does have buttons for braces, but like you I don’t like the look.

I’m in the midst on installing buttons for braces in all my trousers– apart from better draping, I find the lack of pressure on my vitals extremely refreshing. Chacun a son gout, of course, but I’ll happily give up belts and grabby waistbands at the price of looking slightly rustic when the waistcoat comes off.