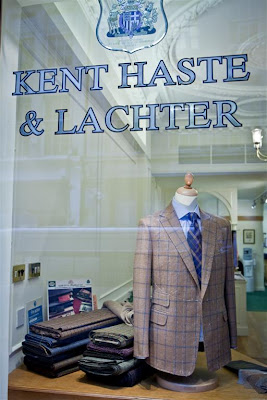 So many stories. There’s the one about Bing Crosby, who signed every one of John Kent’s golf club covers (they were leather back then) with warm wishes that got shorter and shorter as he made his way through the set. The one about Frank Sinatra, whom Stephen Lachter was sent round to measure up with strict instructions not to mention the name of a certain shirt maker. (Apparently the Jermyn Street institution had ambushed Mr Sinatra with a pack of photographers when he came for a fitting. Old Blue Eyes was not happy.)
There’s Lucian Freud, who paid for services in paintings. Only a lucky few hung on to the works – not, unfortunately, Messrs Kent or Lachter. And the Duke of Edinburgh, for whom John Kent holds the royal warrant. On meeting John at a royal occasion the Duke apparently proclaimed with a wink: “What the hell are you doing here?” Plus Burt Lancaster, Douglas Fairbanks, Elizabeth Taylor… the list goes on. These were the stars that walked through the doors back when Kent, Lachter and Terry Haste were at Hawes & Curtis in the 1970s.

This year they have finally been reunited, in new premises on New Burlington Street.

John actually joined Hawes & Curtis in 1963; Stephen and Terry both joined in 1976. Back then Hawes was both a tailor and shirt maker, but the two operations were in different locations, in Dover Street and Burlington Gardens. The owner, Ken Williams, later sold Dover Street and united the two.

Stephen left in 1983, tempted away by a directorship at Tie Rack. That didn’t last long and in 1986 he joined John again, who had subsequently decided to leave Hawes & Curtis after 23 years – Terry, originally his apprentice, took over.

Fortunately John retained the Duke’s royal warrant, despite it being attributed to ‘John Kent of Hawes & Curtis’. He was to give it up again when he fell ill a few years ago, only to regain it double-quick time when he returned to trade this year.

John and Stephen, after a brief stint above the Miranda Club, settled in Stafford Street (where Kashket’s is today). They were there 12 years and apart from some rather frightening issues with damp, got on famously. Terry, meanwhile, joined Tommy Nutter before going to Hackett to launch its bespoke offering.

When their lease was up, John and Stephen took up space in Norton & Sons (Stephen still makes Nortons’ shirts) and Terry joined Huntsman – all around 10 years ago. Finally, after a few toings, froings and near-retirements, the three reunited in Denman & Goddard’s old premises in New Burlington Street in 2010.

The place is just starting to come together. John and Stephen admitted – after taking me through their professional history over lunch, and filling any gaps with gags and anecdotes – that it still needs a few home touches. But they’re settling in, and John’s warrant hangs proudly in the window.

Suits start at £2400 and shirts at £155. Being such self-effacing English gentlemen, they wouldn’t admit what great value that is.

Simon, thanks for the nice entry. John and Stephen definitely have a lot of stories to tell — I heard some others. Though you were luckier — you heard more than I! 🙂

Do you know if they travel to the U.S.?

Very interesting history…but what about the style of cut? Is it one house style or do Mr. Kent and Mr. Haste make up to their own personal cutting style? Can they summarise their coat style in two or three sentences? Also, given the very reasonable SR suit prices, do they farm out the tailoring work to outworkers rather than in-house?

John and Terry certainly have different cuts and should be considered as different entities.

I have not had anything made by them but I think it’s fair to say that Terry’s standard cut is what you would expect from Huntsman, and John’s is what you might expect from Nortons.

They are both, however, very flexible as to style – as can be seen from the suits Terry has made Nick Foulkes. I wouldn’t ask either to make a drape cut, but there is plenty of room for personalisation.

Like most Savile Row tailors, the make is not all done on-site, but they use the same outworkers as everyone else.

And yes, they are planning a trip to New York in April or May next year. I’ll post details here.

Dear Simon, I would not call John Kent’s cut a Norton cut. While he was at Nortons, they were lucky to have the inimitable Kent cut! I first went to John in 1979 and still think he’s the best cutter bar none. I thought he had gone for good,so I was absolutely delighted to discover by accident that the three musketeers are together. Long may they prosper; excellence will out. Anthony Snook

Simon, are the prices you quoted include or don’t include VAT?

They include VAT. So you lucky foreign types get it at 17.5% cheaper.

I write with regards to two bespoke shirtmakers in London, which you have referenced to previously:

I have employed the services of Sean before, and have been generally quite happy with his work. On the other, I have not commissioned Stephen. I would be grateful, if you can provide me with opinions or experiences – any information whatsoever would be most appreciated, but I am interested specifically what is different between these two shirtmakers. For example, in their interpretations of cut, style, needlework quality, and so forth.

I would like to purchase a batch of bespoke shirts – perhaps 10 or so – for work. Given my intended purchase will require quite some cost, it would be great to know, whether the price differences between the two can be justified or understood for my batch order – perhaps less so in terms of raw materials, but more in terms of their labour/craft.

Many thanks in advance.

Hi,
In my experience the work of Sean and Stephen doesn’t vary that much, no. I would probably lean towards Sean in fact.
Could I suggest that you try a Neapolitan maker like Satriano Cinque before making such an investment though? I certainly wish I had before spending a lot on T&A shirts.
Worth being aware of the benefits of both styles.
Simon