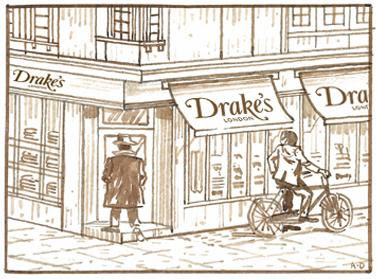 I know the Boris Bike stations around Old Street pretty well now, such is the number of times I have hopped on a bike near my office and ridden up to the Drake’s factory on Garrett Street. It’s only a 20-minute walk, but it’s a five-minute cycle ride.

I love Drake’s, from the classic Italian colours of its ties to the fantastic quality of its socks. But all too often I want to feel these products in my hand before I buy them. Or, more recently, I want to try them on – a need that has increased with Drake’s growing range of knitwear, hats and nightwear. Michaels Drake and Hill were kind enough to let me come up and do that regularly, but it was hardly ideal for anybody.

Now, finally, everyone can do it first hand. The first Drake’s shop, a mere 34 years after it was founded, is opening on Clifford Street. It’s a gorgeous location, on the same block as Richard James and just opposite his bespoke branch. There’s little clue as to what it will look like inside, other than the building site documented on the Drake’s site. But then the focus should be on the ties, hanks and scarves, not the interior decoration.

The opening date was originally set for this Thursday, but I understand the building work has set that back a bit. We’re now looking at the end of May, so keep your eyes on the Drake’s site for a final confirmation. And what will likely be a great opening party.

Golden Lane, by the way, is your best bet for parking the Boris Bike. Two stations and they are normally half empty.

Oh cute love this. I’ll be sure to check it out sometime – thanks for heads up.