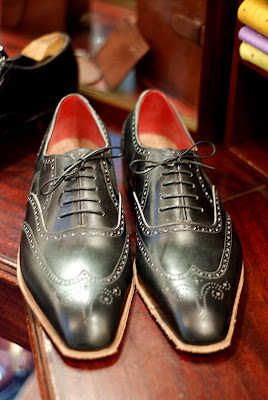 Despite the welcome growth of the dark brown shoe as a business staple, every man should own a very nice pair of black Oxfords. They are worn to the formal events, to the big meetings and to meet people whose ideas on propriety you are not yet familiar with. Consideration is as much a compliment as dressing well.
I have one nice pair of black Oxfords from Cleverley, but they were not made for me. They were bought in a sale of pairs that had been ordered and never collected. So lovely as the make is, they do not fit like a bespoke shoe.
They are also, as you can see from the previous post, in the traditional Cleverley ‘suspiciously square’ style, rather than the longer, Anthony Cleverley toe shape, which I opted for with my first bespoke pair and definitely prefer.
So in a dangerous escalation of tastes and budget, I commissioned my second pair of Cleverley shoes. The shape is the same as the first, but it is a black, imitation brogue. 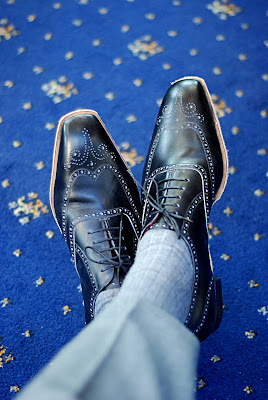 The ‘imitation’ refers to the fact that the first line of broguing – the wing tip – is achieved by perforating the same piece of the upper rather than adding an overlapping layer. It was inspired by seeing a similar pair that Anthony Cleverley himself made, and now sits in the Cleverley window. It was donated by a client of Anthony’s to achieve sales just like this one.
An imitation brogue reduces the bulk at the front of the shoe and, it could be argued, better suits such a slim last shape. Others might consider it a little flash, but then it is not as flash as the alternative that I turned down – Cleverley’s signature slip-on with the elastic gussets and fake laces. With a first pair of black bespoke shoes, it seems best to stay safe.
The fit with this second pair has been tweaked slightly. Not in the last itself, but by refraining from tightening the upper as we did at the fitting stage with the first pair. In retrospect I think this made the shoe a little too tight across the joints.

In other Cleverley news, the firm has started working with Rolls Royce and Bentley in Beverly Hills to offer buyers of either car a specially designed driving slipper (below), which Cleverley will then monogram. I suppose if you’re spending that much on a car, what’s the addition of a pair of slippers? 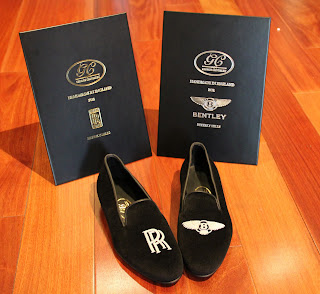 I like the concept of ‘faux brogues’ on slimmer shoes. However, very much dislike the light coloured soles. Too flashy. (Need not necessarily be black. Med/dark brown would knock down the contrast.)
–jc

JC, that is the welt not the sole. These shoes are at the fitting stage and so have no sole yet.

Simon. Sure these will turn out well. I wonder if the imitation wingtip brogue is a bit “casual”/country for a black shoe. Maybe that is the intended effect. I look forwrad to seeing the finished article. Did you go for a “no rear seam” finish at the heel? J

Cleverley are without doubt outstanding cobblers. The shoe shown on your post however is too pointy; heading towards fashionable.
I seem to recall you work in an sector that favours that approach which is fortunate as East of St Paul’s, with out hitting the upper case, such a shoe would not wash.

I have a pair of the “imitation brogue” in the Anthony last. They are called the Churchill II, in the “flashier” lazy man style. These are a very comfortable and stylish pair of shoes. I think the perforating the leather rather than adding another layer does make the shoe look much slimer. I would recommend them.