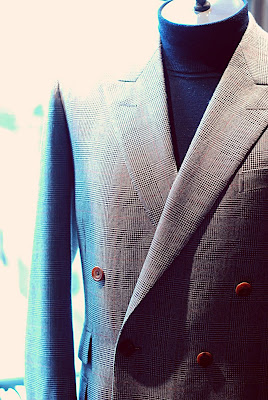 John Durnin of Gieves & Hawkes does a lot of travelling, as I do myself. It was while discussing recent trips, and standing in the new Gieves Blazer Room, that we conceived the idea of creating the perfect travel blazer.

The plan is this. We will design, make and fit on me a travel blazer that we think ticks all the boxes for the kind of short business trips we end up going on. If we think the design successful, Gieves may end up including it as one of the options in its aforementioned Blazer Room.

The blazer will be two-button and single-breasted. It will be cut, however, to fasten with the lapel buttonhole under the chin. None of these flaps under the collar. Too fiddly and too uncomfortable.

The cloth will be a navy mid-weight hopsack, half lined with part of the lining to the forepart in the same cloth. This is a design aspect that some of the Gieves ready-made blazers have – and I saw on my Rubinacci jacket – and I think work well with casual cloths.

We considered fresco over hopsack. But while the former will keep its shape better when travelling, the key to all aspects of the design is flexibility – and fresco is too sharp in my view to go with jeans or khakis. We will probably make some grey trousers out of fresco instead, to highlight the cloth that way. 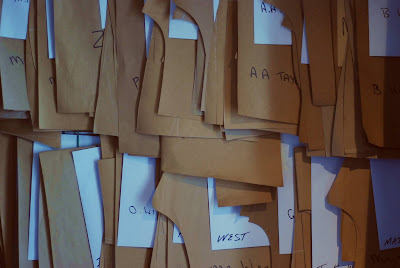 The jacket will have three patch pockets, flapped and buttoned so that valuables will not fall out if you put the jacket down (or up, in a plane’s overhead locker). To echo the shape of the flaps, the outbreast pocket will have a welt in the same proportion. The pockets will all have an inverse pleat in them, to enable them to take more stuff. At least one of the internal pockets will be zipped – but have that zip hidden by a flap of cloth.

One internal pocket will also be proportioned to an iPod or similar smartphone. While pockets can be cut too precisely to a wallet or phone, only for that item to change, small adjustments to the width and depth of a pocket can at least ensure the phone does not fall horizontally.

Perhaps most interestingly, the plan is for the blazer to have changeable buttons. I have had this on jackets before, with the buttons either separate and attached by their stalk to a circle of metal behind, that keeps them in place, or on either side of the stalk, so they are just swapped through the hole. The options will probably be brown horn and gold (or something similarly dressy).

Head cutter Kathryn Sargent and apprentice Richard Lawson will be cutting the jacket and trousers. More details on that next week. 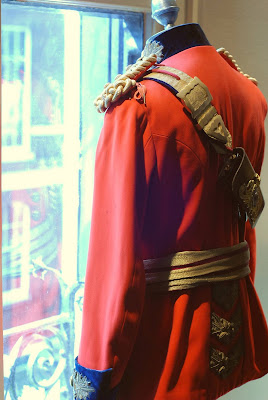 What does a bespoke 2 piece at Gieves start at these days? And what about Anderson & Sheppard, are they about the same?

I’m looking forward to seeing how this turns out.

When considering getting a a travel blazer or suit, one finds many retailers offer a worsted wool/lycra blend (4% lycra at most, from what I’ve seen) as the cloth. This is, apparently, extra comfortable and wrinkle resistant. I imagine you have some thoughts on the subject, and I’d love to read them.

I would avoid blazers with stretch – other high twist wools will be very wrinkle resistant. And more importantly, such a blazer will not hang or drape as well

For years I’ve tried to find a place to recreate this amazing blazer you conceived and have failed miserably. Could you please point me in the right direction???

I’d suggest Kathryn Sargent, who cut the original while at Gieves?

Not a new piece, no, but I did end up taking and having altered the Fox Air suit she made for our Symposium last summer. I’ll do a piece on that as summer approaches.

I like Kathryn and her work, but I just wear fewer of those slightly more structured English suits.

So booked my appointment during my visit to London in 10 days! Really excited and looking forward!

Could you please suggest me some fabric options for me to consider to used on this endeavor??? Recently read about a VBC “Supersonic”; have you tried it? What do you think?

PS. Hope to bump into you at the pop-up later today!

Hey. Big area, but yes let’s chat about it at the pop-up. I’ll be in all day until mid-afternoon

What fabric would you recommend for mid weight hopsack