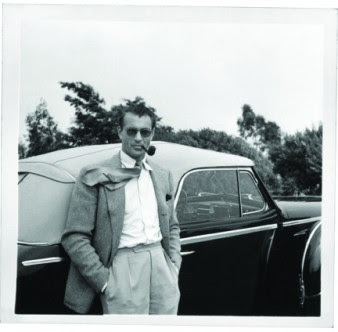 This is the second book of photographs I have had to review in recent weeks, the first being Anderson & Sheppard: A Style is Born. Even the packaging is the same, with both coming in the same brown canvas slip case. But the important similarity is the emphasis on photography.

Of the 190 or so pages in Gary Cooper: Enduring Style, Bruce Boyer’s essay on Cooper takes up 12 pages. Ralph Lauren contributes a two-page introduction and Maria Cooper Janis gives us one page at the end. They are all well written, with Boyer’s history in particular (and unsurprisingly) both eloquent and erudite. He breaks down Cooper’s love of bright colours and patterns, as well as giving us passages like: “Real style is never right or wrong. It’s a matter of being yourself – on purpose.”

But this is primarily a book of photography, as is the Anderson & Sheppard tome. Their primary use is therefore inspiration. They will remain on our coffee tables if a casual flick through consistently reveals styles that we wish to emulate. Enduring Style has one prime advantage here: all the photographs are new, being released for the first time by Cooper’s daughter Maria for the book. It is fresh information on what Cooper wore from day to day. And as the pictures are largely taken by his wife, Veronica (Rocky) Balfe, they show us a casual, unguarded Cooper at rest or play.

Cooper liked Anderson & Sheppard, among others, and much of the tailoring is soft. Jackets are unbuttoned, pockets often patched, and his ties seem so lightweight as being incapable of remaining vertical. Casual shirt collars and unstructured and flop where they will.

Interestingly, despite Boyer’s descriptions of paisley sports shirts and Mexican guayaberas, pattern is largely confined to a strongly checked tie. The shots are of course in black and white, and we are therefore denied the cherry red or Kelly green of the sports jackets Boyer describes. But the overall effect is one of subtle tones and soft textures, whether accurate or not.

That extends into casual wear too. For sports or fishing Cooper is dressed in whites, the shirts thin and tight, showing off his slight frame. The trousers are fuller and long, giving full depth to pockets and a resulting air of easy nonchalance. Hunting or safari jackets always retain a handkerchief in the breast pocket.

When he was young Cooper favoured tighter jackets, sometimes double-breasted. But he is at his most stylish in later years, when the shirt collar is occasionally left outside the jacket, or a neckerchief is tied around the neck. One of my favourite photos is from 1956 and features Pablo Picasso. In it Cooper is wearing his white shirt unbuttoned but knotted at the waist, as some women do in summer. It could easily look affected, but with him it seems like the most natural thing in the world.

Thank you Bruce and Maria for putting together such a lovely book. And I’m sorry I won’t be there this week for its launch. 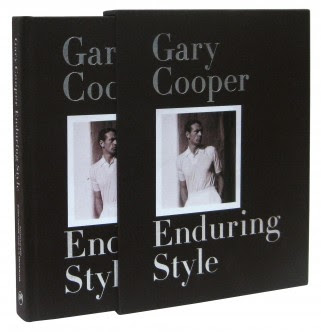 Hi Simon,
I have read your review with interest. And yet I wonder whether you do agree or not with the quoted idea on style, namely that ” real style is never right or wrong. It’s a matter of being yourself – on purpose”. Do boundaries exist in this perspective at all? And which ones might they be? I ask myself.
Regards,
John

Thought you might like these photos of Gary Cooper
http://herringbonemallord.blogspot.com/2011/11/gary-cooper.html
That is if you have not already seen them 😉
Best regards