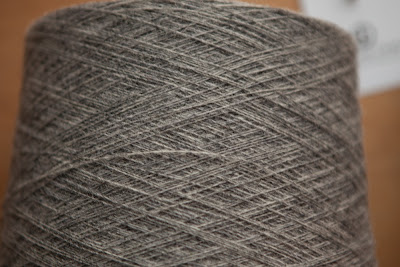 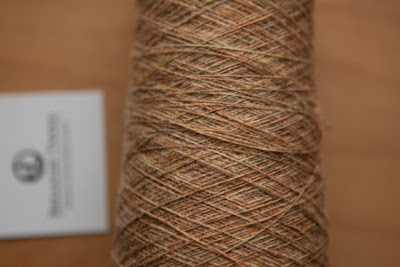 While up on the isle of Lewis two weeks ago, I designed a herringbone tweed with Iain McLeod at Breanish Tweed. This will be available to all readers from now until the end of the year. In January the orders will be collected together and Iain will weave the desired length of tweed. It will then be sent out to readers in February.

We deliberately went for something quite conservative. In part this was so that it would have a wide appeal, but it was also driven by the two friends that had agreed to join with me to place the minimum order: we needed to find something we all loved and would be worn often.

The dominant colour will be a mid-grey – very versatile, very wearable, at home with jeans as much as gabardine. The yarn is called ‘silver’, but as you can see it is a touch darker than that name implies and has some significant variation in the tones. The other yarn is called ‘bracken’. Although mostly tan, this has far more colour in the yarn, with greens and other browns in there.

While the weft of the cloth will be entirely silver, the warp will be silver and bracken combined. Overall, therefore, there will be three times as much silver as bracken, so the grey colour will dominate. The herringbone will be 8×8 – meaning each of the diagonals in the pattern is made up of eight threads. This is the larger of the two standard herringbone patterns, the other being 4×4.

The herringbone pictured below is also an 8×8, so you get an idea of the size, but it has all green going one way, all brown the other. The Permanent Style herringbone, with grey also in the weft, will be both subtler in pattern and dominated by the grey.

We decided not to make up a sample of the tweed as it would have added significantly to the cost, and I wanted this to be as affordable as possible. Hopefully the example pattern and the yarns give a good enough impression. 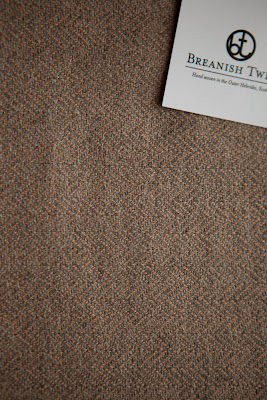 It will be made in a lightweight Shetland wool. At 10 ounces, it is pretty much the lightest tweed you can get from woollens, and is proportionately soft as well. As mentioned in my first post on Breanish, the weaving is done on a 90-year-old Hattersley loom, in exactly the same way tweed on Harris and Lewis has been woven for centuries. It is also warped entirely by hand, something only Breanish still does on the island, giving it that one extra level of hand work.

The Permanent Style tweed will cost £70 a metre. But before you get too excited, this is a single-width loom, so you need twice as much as for a normal jacket, coat or suit. The amount of cloth varies significantly by customer and I therefore recommend you get advice from your tailor on the precise length required. For me, 5 metres is sufficient for a jacket and 7.5 for a suit. So I’d be looking at £350 for a jacket’s cloth.

This is a discount on Breanish’s normal rates, especially for Permanent Style readers, and it includes  VAT – so readers outside the EU save 20%, making it £58 a metre. All non-US orders should be made through Breanish and payment will be through them as well. Price does not include postage or taxes. You will have two options on postage, Airsure (cheaper) or FedEx. Contact Iain Mcleod at [email protected]

All US orders need to be made through Jodek International, Breanish’s agent – David Douek at [email protected]

I am interested in purchasing 5 meters of this tweed cloth.

Can you advise me on how I can put in my order for this fabric?

I reside in the United Kingdom

Thanks Andie, you’re not the only one – we’ve had several already including one from Australia. You need to contact Iain McLeod on the email in the post

I just placed an order for this tweed fabric and I guess it will be a rewarding investment well into the future.

Will you recommend Choppin & lodge to assist me in putting this tweed fabric together into a nice odd jacket? And what are your thoughts about having a patch pockets rather than a coventional pockets on the jacket?

Hi Andie, any tailor would be good – I don’t know if you have anyone you normally use in this regard. And patch pockets would be fine stylistically, but will be rather bulky as tweed is that much thicker than other cloth

I’m just wondering whether you’ve any intention to commission another batch of tweed in the future?

Not at the moment, sorry

Your recent Navy Jacket & Jeans post has reminded me of your silver breanish tweed jacket. What do you think about Abraham Moon’s Silver Gray Lambswool Twill as an alternative to the discontinued silver breanish tweed with the loose, open structure and great texture (I like versatility and ability to wear jackets with jeans up to wool trousers). I am already thinking of commissioning the Moon Navy Blue for a FW jacket as per your recommendation

I think that silver grey from Moon is great. It wouldn’t be in my first four or five jackets, as I don’t think light grey is quite as versatile as, say, navy, dark brown and dark green, but it’s still very nice.

If you wanted something more versatile, I’d go for a darker grey herringbone, like my Anthology

Got it! Sherry Tweed it is! Definitely seems more versatile and casual compared to Moonbeam as it can pair well with jeans and other more formal trousers.

I already bought your oatmeal Escorial tweed and am having Luigi make it up into a jacket. Do you have any fabric recommendations for a dark brown jacket (F/W) that can pair well with both jeans and formal trousers? The Escorial brown you pocked is lovely but I tend to gravitate towards more muted, cold colors (like saman amel), thanks!

Try the lambswool ranges from Moon. You can see them online: https://www.moons.co.uk/

So same bunch as your navy blue lambswool twill recommendation, nice. I assume darn brown is most versatile – do you think chestnut and tobacco are the two standout options within the bunch and if so; which color would you opt for? Thanks!

Or a mid-grey herringbone

Thanks. How does the moon mid grey herringbone compare to the sherry tweedy Gray suit from anthology?

I haven’t worn the former, so it’s hard to say, but I think the H&S is a little heavier and coarser

Thanks! Do you plan on restocking the pink oxford PS shirting? Missed out on it and I love that soft, pale pink

Yep, we will soon. As ever, email [email protected] to get on that waiting list

Also, what do you think about LP Pecora Nera N686024 and N686023, the two 370g brown jacketings? I like how both fabrics are very muted and cold. Would either of them be THE brown capsule FW jacket that you can wear with jeans or wool trousers like your brown Escorial tweed?

I think they’re nice, but probably a little too smart to wear with jeans etc

Thanks for the great feedback!