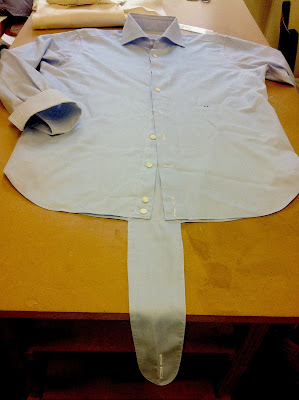 Gianni Cleopazzo of Sartoria Vergallo was talking to me recently about an old-fashioned style of shirt he makes for a couple of customers – the ‘pettegola’. This is a strip of shirt cloth that is attached to the back tail of the shirt and fastens, under the legs, to the front of the shirt.
The pettegola’s purpose is to keep the tail tucked in securely, without having to resort to horrendous things like shirt stays (elastic straps that run from the bottom of the shirt to the top of the socks). The shirt body has to be cut a little longer, perhaps 2cm or 3cm, to accommodate the pettegola, and then adds two buttons to the front hem of the shirt to allow a couple of options for fastening.
Gianni gave me an old one to try and it worked well. The problem, of course, is that it is very fussy. Fuss is the sole reason I don’t have button flies on my trousers and one reason I dislike braces. With the pettegola, you have the particularly fussy prospect in the bathroom of unbuttoning your shirt to sit down, and having to fish between the shirt’s buttons when standing up.
As with long socks, it was probably also more suited to a time when one rarely undressed in front of one’s wife or girlfriend. Although, having said that, Gianni says he has a particularly vivid memory of seeing his father (who would be 74 today, were he alive) undress out of a bright pink shirt, and noting its strange tail. 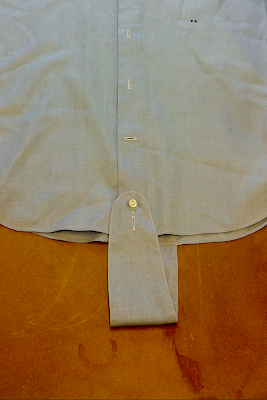 A pettegola is certainly rarely made these days. Gianni has two customers who wear them, but the shirtmaker he uses only has a total of three – so one other in the region. It is not necessarily a northern Italian tradition, however (Vergallo is based in Varese), as Gianni’s memory of his father would have been when the family was in Puglia, in the south.
A good bespoke shirt, with the armhole, body and length correct, should not need much help staying tucked in. Although I noticed a difference, that was on a shirt that had not been made for me. So the irony of the pettegola is that it is most use on an ill-fitting shirt, but you can really only get them bespoke.
‘Pettegola’ is used to mean a gossipy woman in Italian, I am told. Why that is also the name given to this shirt appendage, I don’t know, but I’m sure you can come up with your own reasons.

You can follow the discussion on Pettegola shirts by entering your email address in the box below. You will then receive an email every time a new comment is added. These will also contain a link to a page where you can stop the alerts, and remove all of your related data from the site.

Hi Charles, Some tailors are offering more accessible options, partly made in China. They should not be the ones you are paying 6-7k for. As to the suit being made exclusively on the premises on Savile Row, I'm afraid that's just not how English houses…

Thanks. They do seem a bit over the top, but when you have space and very valuable, delicate clothing you want to look after, maybe worth considering. I’ll stick to a steam generation iron and a couple of brushes . :). But it will be…

Another superb post. Maybe something on sewing a shirt button and the correct thread, materials and technique..... In a future post perhaps. Many thanks Lindsay

Hey John, I know what you mean, but no I don't have that issue. I guess because it's a little smaller than most cashmere hats like this. The cream is back in stock now by the way - it came in last week. S

PS Watch Caps back in stock