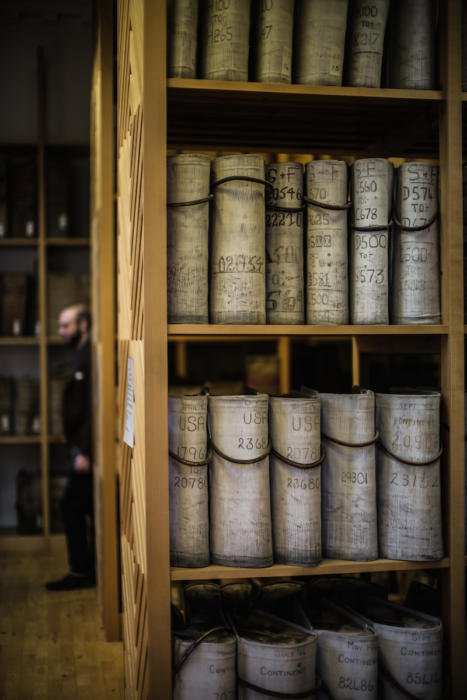 I’m sad to say that the Robert Noble mill in Peebles – which Luke and I visited last year – is closing down.

Readers of the Permanent Style 2015 book will have seen the full photography of the great site. Sitting square in the middle of town – which itself is the historic centre of weaving in Scotland, around the river Tweed – it had an anonymous entrance off a dark-stoned residential street.

Inside were worn floorboards, a beautiful boardroom made of old ship’s timbers, and everywhere signs of the history of the facility. On the wall was the picture below, showing an old aerial shot of the mill in the middle of town. 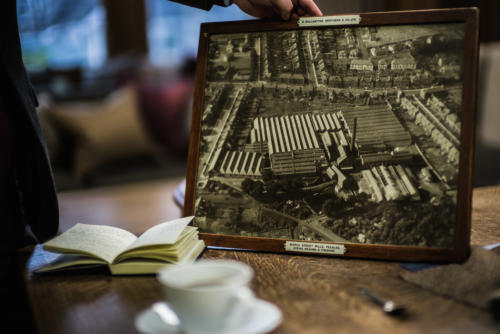 At the end of May a 30-day consultation period was announced, under which offers were invited to buy the mill. None were forthcoming, so in early July the staff were told that it would be closing. Production will cease by the end of the year.

Replin, which weaves heavy-duty cloths for train seats, airplane seats and similar, also operated on the site. That has been sold off to Hainsworth.

Robert Noble, together with its order book, designs and some design staff, is looking likely to be bought by another mill. The great Noble archive (pictured here) will also hopefully go with them.

It’s tremendously sad to see a British high-end mill close down, but particularly one that respresents such a big slice of Scottish weaving history. 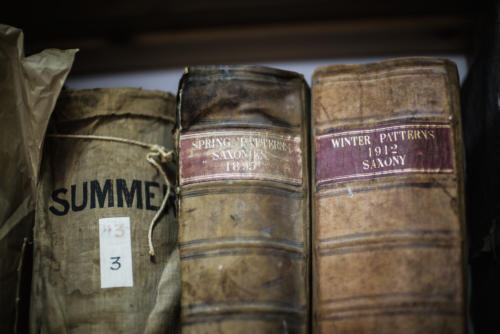 Hi Simon,
This is sad, indeed! And this occurs right now, at a time when the need for quality fabrics is taking hold again in the menswear industry. Of course, hot offices and climate change are the widest-spread excuses aimed at sticking to fabrics for fashion.
From time to time, I wonder whether the current resurgence of interest in British craftsmanship around the world is taken seriously in the UK, to begin with.
So this depressing report is a reminder of what still needs to be done, if craftsmanship is to remain valued in our culture. This issue is to be kept in mind, Simon. For it is and will remain crucial.
John

Channel Four (Friday just gone) ran a story on immigration, the garment and textile business and skills shortages. Interesting piece that gave a background to the decline of theses UK industries respectively. Without wishing to highlight Noble’s difficulties further what was the reason for closure… I ask as we now seem to have an almost implicit expectation of decline. Offshoring is certainly part of the picture but I would be grateful if you could shed any further light on the subject.

Sad to read this. FYI C4 News did a report on Friday as to the current difficulties of this sector particularly in relation to skills and immigration. Below your story are two related posts; Robert Noble and Italian Mills. As you know about both could you shed some light/comment on how the Italians have maintained their industry (linked to the success of design/manufacture?) and why continue to lose ours.

Thanks yes I saw it. Worth reading my interview with Jonathan Clay if you haven’t – lots of info on why Italy went up and we went down

Simon, given that Robert Noble mainly supplied RTW brands with cloths (brands pursuing high profits), is this simply a case of them being undercut by newer cloth companies in Asia maybe? If so, you can’t compete with that. Maybe a change of direction would have saved them? Very sad to see any historic company go out of business.

Asia less of a problem for their end of the market (pretty high). They had gone through a few changes in recent years though.

Yes probably. To be clear though, Bill is not a mill, it’s a merchant, or rather one of several brands under a merchant. Noble was both, in that it had a physical mill and a design team. The latter – what would be thought of as the brand, looks likely to be sold on

Thank you Simon. I hope that all the know-how is preserved and that the tissues are replicated faithfully. I keep three cuts Noble and I must say that they have good drawing and spinning.

When I see situations such as this, I always wonder why the employees do not take over.

Usually, all the skills are there to prosper, and if the business propered for so long, it probably could do so going forward.

Not to downplay the need for capital, or good management, but ususally when these are in place the main thing that all parties bemoan the lack of are good, reliable, skilled employees…

Trust me, 90% of the employees would do something else if they could and it paid more money. Factories are not nice places to work. These are not artisans