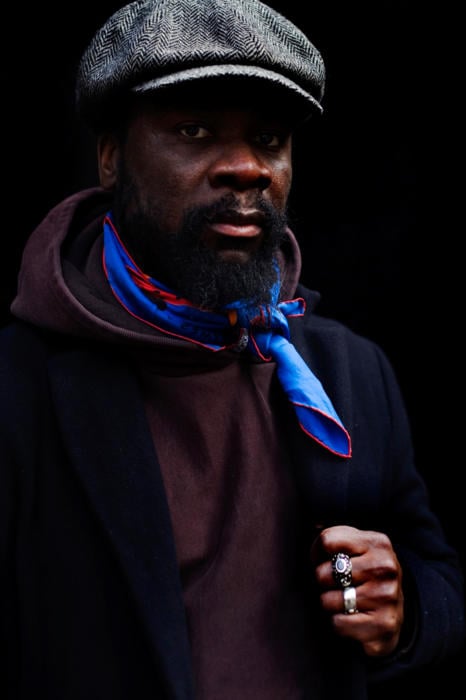 I have always loved the Sartorialist, ever since Scott started shooting. The prime reason is that he applies a single aesthetic – essentially a classic, sartorial one – to the whole of his output, no matter what the subject matter. It is an aesthetic that searches out fit, colour and pattern.

I would argue that this aesthetic is as key to casual wear as it is to formal wear. And this is the reason Scott appears to have greater range. Because he recognises this. Most casual/streetwear blogs are not interested in aesthetics. (They are often more concerned with brands and with transient trends.)

This aesthetic is very similar to my own, so I’ve tried to spell it out.

First, fit. Scott has a thing for cuffs that poke out of a jacket just so (about half an inch). Others on formal wear sites will spend many an hour discussing the merits of a natural shoulder or the new trend for shorter, narrower trousers.

But fit is just as crucial in casual wear. People define themselves by the fit of their jeans, whether baggy and low slung or tight and short. One evokes hip-hop, another punk. When I was a teenager they were all bootcut. Now even the least trendy teenager has them narrow and straight.

And men use fit to express themselves in formal wear just as much as in casual wear. A man consciously wearing high-waisted trousers, perhaps with braces, may be determined to evoke a bygone era in his tailoring ¬– one where no man exposed his shirtsleeves and the bottom, horizontal button on a shirt attached to your trousers. 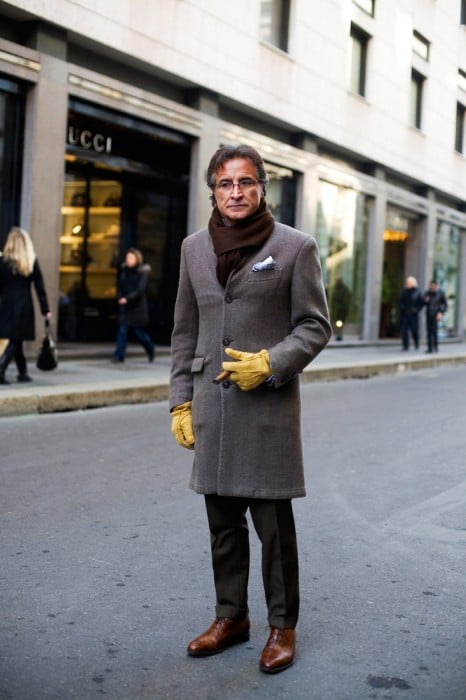 Second and third, colour and pattern. I’ll demonstrate this parallel with a few of Scott’s photos.

Take the man with yellow gloves. Sometimes one wakes up in the morning and feels like putting a small twist on a normal outfit. In formal wear, this may be yellow gloves, or an orange belt. In casual wear it might be those radiation-bright Nike trainers. Which probably need to be balanced a little with dark jeans and an old sweater. Just like the man in this photo, dressed more formally, has balanced his gloves with a sombre coat and classic shoes.

That ‘pop’ of colour is the same in both outfits. They have the one idea, the one aesthetic, in common.

The handkerchief is key; the handkerchief pulls it together. It’s not hard to think of similar accessories, whether they be scarf, cap or trainers, that would have the same role in a casual outfit.

As a final pièce de resistance, Scott’s photo from last week of the man in the hoodie (top). It is a beautiful image – beautiful because it is shot well but also because of the harmony of colour. The blue and red of the scarf is bright; the blue and red of his coat and sweater are dull. Both work well with his skin colour, and both accentuate each other.

This image is not about suits or brogues. It is about the aesthetic of dressing well with colour. It applies just as much to formal wear as to casual. Replace the coat with a suit, the sweater with a tie (on a pale blue shirt) and the scarf with a handkerchief. Still a great combination.

Some casual wear blogs seem divorced from formal ones because they spend their time saying “ooo, look at these new trainers from Adidas, I want them”. Some formal wear ones are no less shallow.

The pleasure of dressing is an aesthetic pleasure.

Very well written and thought through.

Simon, those are exactly my thoughts only said much better than I ever could. Dressing well or having style isn’t exclusive to only one group or one way. They both care about fit, color (coordination), pattern, design, quality… It’s the fact that those seemingly opposite groups don’t recognize that “they’re closer than they think” that bothers me the most. And even more the fact that they often proclaim their way as the only right way. That kind of view is more about snobbism and elitism than style.

I would like your criticism of my intention to purchase four bandanas in colour Royal Blue (the green on the screen looks dirty) to use in another function: as hankerchief. The bandanas are advertised on the Roderick Charles website. Roderick Charles offered me a reduction £7. Do you think my idea to use these bandanas as hankerchiefs (not pocket squares) for my nosr, etc. has drawbacks or somehow faulty? Am I purchasing the wrong article at the wrong shop for the wrong purpose?