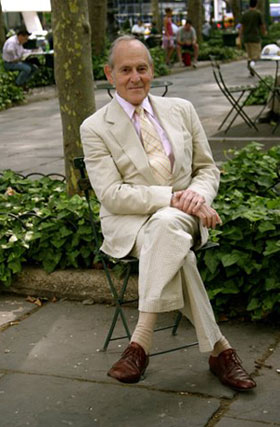 New York puts London in the shade. The hot weather (it’s been above 30 Celsius all this week) brings out the city’s hidden peacocks.

You just don’t see that in London. Granted, the consistency of the weather here makes summer clothing a better investment – a sunny day is actually sunny all day, rather than being half cloud in the morning, patchy at midday and just overcast in the afternoon. But I would bet good money that these impeccable gentlemen own four or five summer suits, and their peers in the UK own none. Such a shame.

Some would say that the Americans are not dressed well, in one regard. No matter how well tailored the outfit, or daring the cloth, every one of those summer suits had pleated trousers and no jacket waist to speak of. So while they were striking, I would argue they weren’t very flattering.

The trousers also had cuffs (or turn-ups) which, while I know many people are a fan of, create a very cluttered picture in my eyes. Given that the gentlemen I saw were wearing trousers that were wide, decorated with pleats, worn with a belt, and few of them wear slim, the last thing they needed was another bit of texture to break up the line of the outfit. All the slimming, heightening effects of the suit were removed. (I know cuffs are also meant to help pleats stay straight, but doesn’t tape add just as much weight?)

So the cut was not to my taste. This is the difference between silhouette and fit – something I stressed in a previous posting. The fit was immaculate, but the way they had chosen it to fit (the silhouette, the proportions) were, in my eyes, questionable.

But this is obviously a personal choice. I have to admit that what they did, they did well. In fact, I think many Americans get a bad press in the UK. Too many of them wear chinos that are too wide. Almost a third of them seem to be wearing the same outfit, which pairs these chinos with a shirt (or polo) and deck shoes. [I had the surreal experience yesterday of being in a list with four Goldman Sachs employees, who were all wearing blue button-down shirts, brown belts, chinos and brown deck shoes. It was freaky.] Finally, some Americans wear their chinos with trainers, which is just ugly.

Yet there are none of the classic English howlers – no suit jackets with t-shirts, no shiny tracksuits, no voluminous untucked dress shirts. The rules seem to have stronger roots in New York. Yes, the outfits can be boring (if a third were wearing the deck shoes outfit, about a quarter were wearing blue blazers) but the belts generally matched the shoes, the shirts were generally tucked in, and no one had a matching tie and pocket handkerchief.

So here’s to New York men, for their peacocks and their consistency. Without them English style wouldn’t have got far.