The crotch on these trousers seems to be wearing through. That’s not good – I’ve only had them for nine months and worn them 15 times or so.

Grey flannel, too. You wouldn’t expect thicker material like that to wear through so fast. Indeed, I remember the Ralph Lauren salesperson telling me that the thickness of the material meant they should last, and consequently the trousers could be worn on their own occasionally. I’ve got to be in the West End anyway tomorrow; I’ll take them in to the store and see what they say. 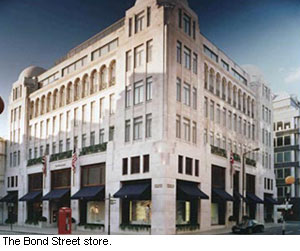 I was pleasantly surprised. The after-sales service I received in the Ralph Lauren flagship store on Bond Street was impressive. So impressive, indeed, that I thought it was worth writing about. After all, if anything is going to distinguish a designer boutique from RL, which consciously tries to emulate the best traditions of British menswear, it should be its service.

The first sales assistant directed me to the manager, Adam. That entailed a five-minute wait while Adam was located, but then I’ve never objected to five minutes browsing in RL on Bond Street – did you know they now make that cable-knit cashmere into throws and cushions? Lovely stuff.

Adam was considerate, understanding, and said I had two choices. Either I could try and have it repaired by a tailor (mine own or theirs) or I could have a credit note for the whole suit. As the suit was sold as one item, it would have to be returned as a whole.

The problem with a credit note was that it would be for the price I paid in the sales (around £600), whereas the full-priced suit would be more like £900. But a new suit in January is better than a holey suit now, so I took the credit note. Adam was conciliatory, friendly and helpful again, suggesting I should ask the menswear sales assistants what they could do.

Which was where it got exciting. Upstairs, there were still some of the summer suits on sale – on one rack, at the back on the left, rather less prominent than the new stock. The ever-helpful assistant Gregor proceeded to dig around in this rack and produced a better suit for less money. Now that’s service. It was a Black Label suit that had been reduced from £1100 to £550 by this point in the sale. Given that the suit being replaced was Polo, this was an upgrade. Fortune smiles on the blogger.

The £50 saved will probably go on alterations, but the result was still very satisfactory. Good after-sales service and a little luck produced a great day of shopping, for free.

A bit off the topic, but I was wondering if you could tell me whether the suit that you had made in Hong Kong was canvassed or fused. Also, would you know the same about the suits made in Thailand?

Finally, how closely did they follow your instructions? Exactly or mostly.

That’s great service that they would stand behind their product and take the return. The only other retailer I know that does that is Nordstrom, who would return it for cash if you wanted. Some companies don’t seem to understand how important quality customer service really is.

Guest Comments »
I somehow always thought that flannels did not wear well – not sure why, but perhaps it was somenthing to do with the rough nap of the cloth. Will at ASW advises leaving two days to rest flannel trousers, so maybe he doubts their robustness as well.

Comment by Paul Hardy — September 21, 2008 #
That is true, Paul. As with sweaters that are made of longer fibres, flannel can bobble more easily as a result of those fibres rubbing together.
I think letting flannel rest for two days is more to do with the thicker material needing longer to straighten itself out on the hanger.

Comment by Simon Crompton — September 21, 2008 #
Aamir,
The suit in HK was canvassed, but I had to specify that. And they followed my instructions exactly, which was impressive. Unlike previous HK tailors. Have a look at all the Hong Kong posts (perhaps through a search) and you will find details on this.
My impression of Thai suits is that they are generally of poorer quality, but I’m sure there are some very good tailors there.

I blew through the crotch of Blue Label grey flanels in less than a year. Was told by Polo the material is a very soft Italian wool and if I brought them in they would be exchanged. My salesman then was Roger in the Chicago -Michigan Ave store. A wonderful man who managed Dunhill before it was closed.

While I have complained bitterly about some of the things Polo has done and is doing – – you can’t argue with their return policy. I would say the same about Brooks Bros (who happily took shoes back I had worn on the street) and J Press (the NY store at least – – I’ve heard complaints about DC).

How do you find the Black Label suit? I’ve been thinking of going for something a bit slimmer than I am used to wearing and with the state of the economy, my MTM budget has vanished.

EEL, the black label suit is great, a nice slim line and good quality. The placement of the waist button is very low, which I like but some may not. It does give a lot of prominence to the tie.

I have had another black label suit for just over a year as well, and that has worn well.