I was fortunate enough to be in Buenos Aires last week for work, and was able to appreciate a city renowned for its style as well as its steak.

Argentine men have much of the casual, easy style of their south European cousins. A photo sent to me of a lawyer I was interviewing showed him leaning against a doorway, a strongly striped suit offset by the classic Italian Background of dark blue tie on pale blue shirt.

The tie was undone, but kept neat by the buttoned jacket – a touch that is all too frequently forgotten by men elsewhere in the world, but was reflected in a recent interview with Tom Ford. “Always keep your jacket buttoned,” he said. “If I have one rule for men, it’s that. It instantly makes your silhouette. It’ll take pounds off you, just in terms of your shape. Especially if you are being photographed, you really should have the jacket buttoned.”

He puts it almost better than I could. If you don’t button your jacket, the tailoring is simply thrown away. 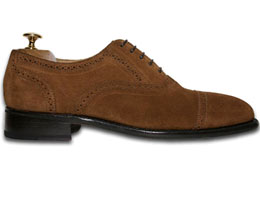 Elsewhere in the city, this simple style was reflected in other south European staples: brown leather shoes, simple white pocket-handkerchiefs and a taste for pale, unusual tie colours (lime green was a favourite). There was also a surprising prevalence of brown suede shoes: almost as much as there was leather.

This seemed like an inspired choice, and one I could emulate, until I considered the weather. It’s either raining or it’s sunny in Buenos Aires. The rain is heavy, even tropical, but it’s certainly not drizzle. And when it’s sunny there isn’t a cloud in the sky.

Wearing suede shoes is therefore an easy choice to make. Not so in the UK, where clouds day after day can threaten rain without ever falling, and it’s rarely guaranteed to be a drizzle-free day.

The biggest difference between Buenos Aires and Italy, however, was the consistency of this style. As one local resident confessed to me, Argentina is not yet rich enough to have a large middle class that can afford high-quality or tailored clothes. This means that the threads, many of them of European origin, are limited to a rich, professional class. It is their scarcity, in fact, that contributes to their price – a smaller market means higher margins.

So appreciate the office-bound workers that still require suits on a regular basis. As the suit and other more formal attire become less required and (probably) less popular as a result, the margins and prices on those clothes we love will rise.

Great place, Simon. Buenos Aires has always been a unique European city in South America. I’ve seen pictures from the 30’s and 40’s of some relatives who lived there, and they told me how elegant Buenos Aires was.

The railroads were built by the British, Spanish architecture, Italian (Neapolitan) culture, with German and French immigration thrown into the mix. BA is a fascinating city. I’ve been curious to see how elegant it has remained in the last few decades.

… though I wonder how these perceptions would hold up over time. Upon arriving in Korea initially, I was struck at how put-together everyone was: casual or formal, office-square or artsy-bizarre, Seoul’s residents always appear as though they’ve stepped out of a movie or a magazine.

As time went by, I began to notice smaller details which disappear in an ensemble: cheap material, a preference for synthetics, mismatched suits and ill-fitting garments. I think as an American I was so awestruck by the vast number of men in suits and women in dresses I didn’t notice the smaller details.

So while, for instance, I have very positive memories of fashion in Copenhagen where I spent six months, I wonder if there, as in other places famous for stylistic originality, the whole tings falls apart when one looks closely enough.

Upon further reflection and rereading your article, I surmise that the collection of colors you saw in Buenos Aires would probably be much more pleasing for a greater length of time than the dour sack suits popular among businessmen in Korea, offset only by bright silver silk suits cut short worn by younger men, though each group maintains a propensity toward glittery ties which can be blinding even if they don’t have rhinestones on them. (You think I’m kidding.. I am most certainly not)

Hi. I am traveling to Bs As for New Year. I’d like to know if you could recommend some shoe shops for leather balmorals or adelaides, and if you have an idea of the price range.