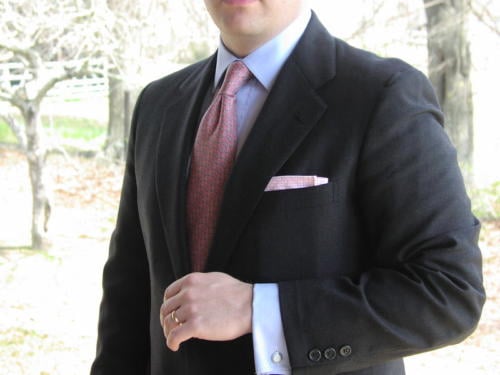 British lawyers have a penchant for a particular suit/shirt combination that allows them to sport brightly coloured ‘fun’ ties. It’s an object of derision but holds lessons for all of us.

A while ago I wrote about the Italian background: the tendency of Italian men to wear a plain blue shirt and dark blue tie as a neutral support to more outlandish suits or accessories. This neutral, conservative combination is an easy fallback for the stylish man. If you’re not sure what will go with a particular suit, just opt for blue and blue.

The English lawyer’s background is similar, but transposes the blue/blue from shirt and tie to shirt and suit. This is practical combination to support a certain type of tie, namely that of a pale, light colour.

This tie is often from Hermès. It often has small characters printed on it (hippopotami, say, or squirrels). But most important is the fact that it is a light yet pale colour.

This is not an easy shade of any colour to wear. A white shirt makes the lightness of the tie too stark. The contrast is too great and both can end up looking cheap. A blue shirt is much better able to support such lightness, being a more muted colour itself and so creating less contrast.

However, being a pale version of this light colour, it could easily fade into nothing if worn with a pale or mid-grey suit. So a navy suit works perfectly – it provides a solid base for the tie’s colour, and also harmonises with the shirt to produce a single background block. There is little contrast, but still a solidity in support.

If you are ever stuck for what suit and shirt to wear with a pale-coloured tie, this is your answer.

I won’t comment at anywhere near the same length on the images used on these ties. Suffice it to say that there is a correlation between lawyers generally being dull, introverted people, and a compulsion to display childish animals. I will also mention in passing that some accuse these lawyers of wearing their entire personality around their neck.

Oh, and ref the image – don’t match your tie and handkerchief, please.

I’m having trouble believing that a company which seems to pride itself on sophistication prints ties such as these.

I think, AP, they are largely a hangover from the late 80s and early 90s, when perhaps a sense of humour with your style was considered desirable.

They have taken an obvious backseat in recent seasons at Hermes in favour of older, graphic designs and plain colours in unusual fabrics.

seem to recall reading somewhere recently (sorry I can’t recall exactly where) that frivolous ties are more popular in economic downturns. So maybe there will be a recession renaissance?

Hello Simon,
I am a Law student and soon I will start internships in Law Firms.
I did one in London and the environment was very casual.
I mostly wore suits and separates. Ties were practically banned.
I am italian and I am looking for some in Milano.
Do you think I should invest more on suits or separates for my future purchases (especially for summer which is very hot in Italy) ?

Hi Diego. Separates would be more versatile, but it depends on what the firms are like – try and work out what people where there? I’d imagine it might be more suits, but I’ve never worked in a Milanese law firm.

Do you have a jacket/tie equivalent that can work with virtually any shirt? I personally was thinking navy jacket with a brown or black knit tie, but would love to hear your thoughts.

Thank you for your consideration- love the site!

I’m not sure there’s a combination that would work with any shirt, but a navy or dark-brown jacket would certainly the safest. And then yes, you’re on the right lines with the tie – perhaps the brown rather than the black, as black against strong or bright colours might look a little cheap.

In the end, it’s probably going to be more the case that you have three or four ties, which between them go with everything. There are some thoughts on that in the Ties chapter of the Wardrobe Building section of this site.