My post just over a week ago on the possibilities of finding cheap bespoke shoes by separately arranging for a personal last and a maker has drawn a lot of comment, both on the sites and privately through email or meetings.

To respond to one point quickly – I do not mind commissioning an independent worker rather than a bespoke company in London (that has invested “in bricks and mortar”) as small artisans need as much support as any manufacturer, no matter how small. I have also invested enough (indeed, many would say, too much) in the English shoe industry over the years.

Now to the main point: commissioning your own shoes. Those that responded to me agreed with my conclusion that simply sending a scan of your foot to Springline and then sending that to an independent shoemaker would not produce a well-fitting shoe. Bespoke is about process and about trial-and-error. 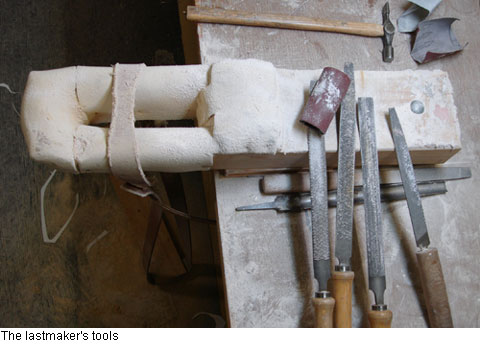 However, many people do go to the effort of producing their own lasts and then commissioning shoes. This takes more time and effort. You have to talk to the lastmaker, have him examine your feet and, if possible, see the imprint of your foot on the insole of shoes you have worn for a while.

Then you need to have a trial shoe made. This is best if it is at the stage where the shoe is ‘braced’ – an earlier stage than that at which the London firms tend to do the fitting, which is usually when the shoe is ‘in welt’.

And then return to the lastmaker for adjustments, which is easier if you have a personal relationship rather than just giving him a sheet of measurements. There will always be little things to discuss as well, like the allowance made for space at the end of your toes. This plus the length of your foot is the total length of your last – the ‘stick length’. (A hundred years ago the rule was ‘three sizes’ (one inch in total). Today most firms go shorter: two or two-and-a-half sizes.)

As with the process of having a bespoke suit made, it is as much about personal preference as about the measurements of the tailor.

Once the fit is good, the last can be altered for every subsequent order of shoes, as long as the heel pitch (height of the heel) and the toe spring (distance of the tip of the sole to the ground) remain constant.

As I said, many go to this effort and made. Some have a last made and then even buy their own leather and commission separate closers and makers. But that is the proper way to get the best-value bespoke shoes.

A couple of more points to clear up. Cliff Roberts uses lasts that are similar to those of Edward Green 888 and 202 – not the same, as this would be illegal. The guidance is largely for American customers that are ordering from further away but need a point of reference – and many have Edward Greens.

Cliff’s soles are attached by machine, but many do this (old firm Peal & Co is said to have attached all its soles by hand-cranked machine, even bespoke). The welt, however, is hand-sewn and the threads for that sewing and all handmade and hand-waxed. The heels are also built by hand.

Slip on can you help

Hi Simon,
What do you think about Springline bespoke lasts?