It’s not easy wearing a hat. You stand out more in a crowd than a man wearing polka-dot knickerbockers or a cape. The hat radically changes a man’s silhouette, probably more than any other item of clothing.

People look at you if you wear a hat. Anyone that is passionate about classic men’s style is probably used to the stares of others. But a (proper) hat draws stares from everyone, everywhere. I bought my first proper hat – a brown-felt trilby from Lock & Co – a couple of weeks ago and am just getting used to these sensations, this attention.

The comments on that previous post included: “I have been a daily hat wearer for years. While I do get the occasional odd glance while wearing a hat, I mainly get compliments” and also “wearing a hat makes you look like a dope, especially if the hat is a very fine one.” I can completely understand why men are passionate about hats in both directions.

I think the reason is that everyone knows hats are incredibly practical, but they don’t feel comfortable wearing one. And I can’t help feeling that perhaps they resent that. Or they resent that their head gets cold and they feel silly in a beanie. And flat caps look odd, or over trendy.

A hat keeps you warm. It’s an overused fact, but a fact nonetheless, that most of your body heat escapes through your head. When you get older, losing your hair, many years from now (as the Beatles put it) you need something to cover your head in cold weather. It’s necessary.

And a hat keeps you dry. Remember those close ups of Humphrey Bogart, standing in the rain on a street corner, watching the house opposite? The rain was pelting down on his hat and trench coat. But he wasn’t getting wet. It’s an oddly liberating experience when you first where a proper hat in the rain, and everyone around you is either clashing umbrellas or scampering for cover.

If you just don’t like hats, fine. But trust me, if you have even the sneakiest suspicion that you might like one, try it a few times and you won’t want to turn back. Sure, you’ll feel self-conscious, but that’s the case with wearing anything new. I used to feel self-conscious wearing a pocket handkerchief. Now I get odd looks if I’m not wearing one.

Some hat enthusiasts will disagree with me, but I think a hat is also an unusual enough accessory to need balance elsewhere. I won’t wear my hat with a double-breasted suit, tie and briefcase. Because to me that is straying almost into costume – or a lack of individuality. I think my hat looks best with casual trousers, a blazer and open-necked shirt. Perhaps a raincoat on top. In the same way I wouldn’t wear a tie, pocket handkerchief, tie clip and boutonniere to work, no matter how good it might look. It’s a question of balance and personal taste.

Finally, for those that requested it, there are shots here of my hat with its box, and a photo of how it looks rolled up for travel. 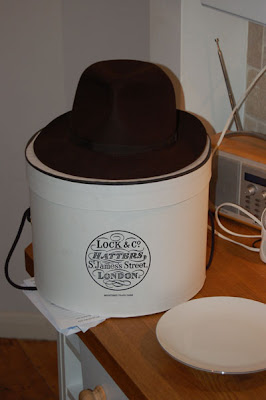 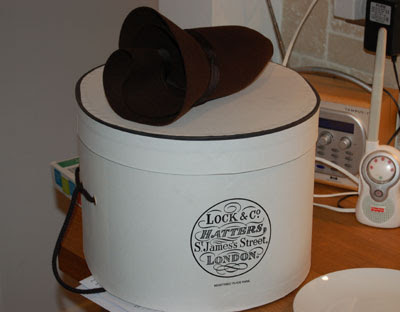 You can follow the discussion on How to wear a trilby by entering your email address in the box below. You will then receive an email every time a new comment is added. These will also contain a link to a page where you can stop the alerts, and remove all of your related data from the site.