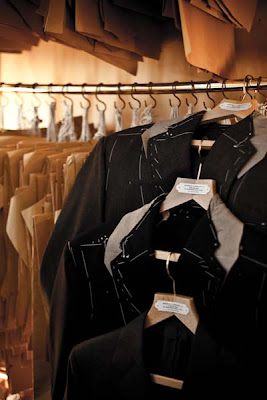 Anderson & Sheppard probably has the most individual silhouette on Savile Row (though strictly they are, of course, off the Row on Old Burlington Street). The original, draped style developed by Frederick Scholte has become a firm house style, the soft shoulder, high armhole and large sleevehead now instantly recognisable.

But the chest of an Anderson & Sheppard suit gets little attention. Its beauty is subtler, softer and less immediate. There are three different body canvas options, but each is lighter than those of most of A&S’s peers. All are wool or horse hair, all are loosely woven and – perhaps most importantly – all are cut on the bias. 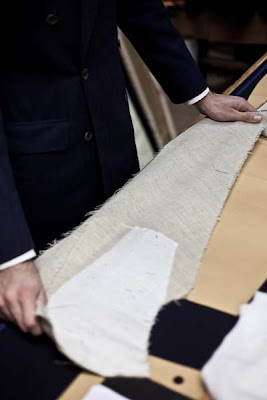 The body canvas is the longer piece of material pictured above. On top of it are sewn the other two elements of the construction – the chest canvas and, on top of that, a piece of soft white felt. Most tailors position the body canvas so that the weft and the warp (the directions in which it was woven) are at right angles to the suit. This makes it stronger, firmer and more rigid.

But cut the canvas at a slight angle (around 30 degrees or so on an A&S jacket) and it can stretch. In the picture you can just see the lines of tension as I stretch the canvas. That would not be possible if it were cut straight. You can also just about see the lines of warp and weft in the material. The chest canvas (the smaller section at the bottom of the picture) is kept straight, as you want less movement to be possible here.

In a similar way, the stitching of the chest varies along its length – as well as between tailors. Anderson & Sheppard stitching tends to be looser, allowing for greater movement. In the picture below the chest portion is on the right, with stitches an inch or more in length. This is relatively large compared to A&S’s peers, but with everyone the stitches are smaller higher up the chest and on the lapel (the central portion of the picture).

The grey taping runs around the inside of the lapel to retain its shape. And the far left section of the picture is the edge of the jacket, showing basting stitches. 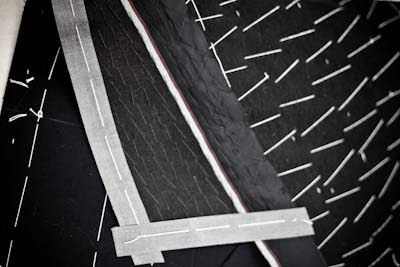 The Anderson & Sheppard jacket is also given greater movement by the stitching along its shoulder seam. Even some of the most expensive tailors prefer to sew this part by machine, either because it is easier or because they believe it produces a cleaner line. A&S does it by hand, so there is greater movement in the seam. Pick a jacket up if you have the chance and try to stretch the seam – holding the shoulder in one hand and the collar in the other. Then try it with a normal suit. The difference is marked.

Finally, for a little nostalgia, below is a page from a 1960s guide to being a tailor – with the man illustrated sewing part of the chest. This guide was given to managing director John Hitchcock when he joined Anderson & Sheppard and he was kind enough to show it to me. Behind the book is Mr Hitchcock’s exercise book from the time, with each page containing painstaking illustrations and neat commentaries. Nothing about the Anderson & Sheppard chest has changed since then. 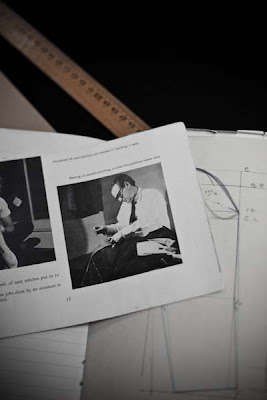 It really is admirable how they have refined and perfected their cut over the years.
Peeling back the layers really helps us understand the unique quality of A&S.

The subtitles of fine tailoring are important, but I wouldn’t know how to identify them if not for blogs like this. Thanks for sharing.

i’m amazed how open Someone like A&S are about their tailoring methods. you’d think they’d guard them fiercely !

whats that Surbiton Bespoke suit maker like? By the way I made a fantastic discovery in Bespoke shoes at a trade fair .Get in touch if you are interested in 200 pound bespoke

My experience of Anderson and Sheppard was most disappointing. I hardly wear the jacket now. Firstly their selection of cloth seemed very lmited and I was not sure whether it was because I was a first time client.
When i received the jacket(by post) there was a little defect in the cloth over the upper chest. Being naive I just accepted this as who is going to make a whole jacket again? Although small it was certinly noticeable and that gave me the biggest disappointment.
The front button fell off within 6 months. I always do the jacket button up.
The shoulders looked asymmetric to me but Mr Hitchcock did not really agree and there was a roughness to the shoulder working which surprised me and which I asked to be re done.
They are not really interested in the ‘small’ customer.
The stiching from the collar has come loose. The lining is poor and has already worn in places despite me asking for more robust lining.
The horse hair that is used in the shoulder area sticks out through the material and can easily be fely by running the hand over the top of the shoulder.
My experience with Maurice Sedwell was altogether different. I would recommend them. People comment favourably on the jacket they made for me.
I am surprided you have not tried them out.

My Ralph Lauren tweed functions so much better then the A and S that I wondered why I ever went for bespoke.

Thanks, always good to hear.

Davide was at Maurice Sedwell for a while and his style is similar.

Question – I recently got a sport coat from A&S. I generally like it, a lot actually. But one issue is that the extra material in the chest makes me look like a body builder. For some body styles this might be desirable, but not mine. Do you know if they are amenable to reducing the bulk or if it represents their fundamental view of jacket making? I really liked the experience and execution of A&S but might need a tweak in style. Also wondering if they are open to making a slightly shorter jacket. It feels a bit long compared to some Italian jackets of mine.

The answer is, yes they might but only a little. Hard to quantify the amount, particularly in the chest, but if it’s something you really don’t like it might be worth looking elsewhere