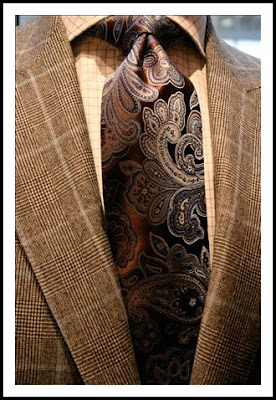 There aren’t many bespoke tailors in New York. Even fewer that are younger than 70. Old names like Tony Maurizio, Bill Fioravanti and Nino Corvato have been around for long time and still hold their own, but they are getting on a bit. Leonard Logsdail is a little younger and started working a few years ago with Stephen Kempson, who adds some design and lifestyle expertise as well as a range of shirts and shoes.

I was fortunate enough to spend a happy afternoon with both of them yesterday here in New York, alongside English tailor Kenneth Austin of Benson & Clegg, well-known writer Gary Walthers and Stephen’s brand manager, Rob Solis. For a lively debate on style fora, judging customers and making suits only using ‘rock of eye’, I highly recommend it. Ask for the bottle of red and pick one of the high-backed armchairs.

Logsdail makes a full-bespoke suit out the back of the rooms he shares with Stephen at 53rd Street Manhattan. Just four people are involved, including one lady for basting, finishing and buttonholes. Although Logsdail has been in the US for almost 20 years, he trained with a fair few names on Savile Row, including Bernard Wetherill and Welsh & Jeffries. He was kicked out of the former when Kilgour turned towards ready-to-wear – a decision that it is ironically now reversing.

Kempson’s strength is design and colour. A former Brioni man, I could tell he liked his cloths and combinations from the off. He was wearing a grey-flannel double breasted, with alternating thin and thick chalk stripes. Buttons in high-contrast yellow horn, four working buttons positioned close and tall, elongating the shape. Big roped shoulders too.

Clients that use Stephen are often those that want an entire wardrobe picked out and shipped, or designed for a particular itinerary or trip. He famously told Financial Times editor Lionel Barber that he dressed appallingly during an interview for an FT piece on bespoke (when Barber was US editor). Fortunately, Barber took it on the chin and asked Stephen to re-work his entire wardrobe. An interesting sales technique, though obviously effective.

Logsdail, for his sins, once made a bet with a friend that he could make a suit for a customer based entirely on rock of eye, so without taking any measurements. He won the bet, backing up his assertion that tailoring is 90% about sizing up the client – both physically and psychologically.
So a nice place to be and a good bottle of wine. US terminology does drive me up the wall though. If you think it’s hard in the UK, with every tailor and his dog misusing the term ‘bespoke’, count yourself lucky that at least some people agree on the terms and their meaning. Custom tailoring has a legitimately wide range of meanings, there are grades of made to measure and bespoke is more often called bench-made. Which just makes me think of leather suits being lasted over a wooden mannequin.

if you can be bothered, would you mind clarifying what ‘bespoke’ denote in your opinion? i ask this question after reading several comments on some of your articles pertaining to RTW, MTM and bespoke.

as i live in new york city, i tend to hear the term bench-made custom, which is explained as a garment that is custom tailored from a unique pattern of a client, and not from an existing one. the main difference between bench-made and bespoke then, is the fact that with bespoke, there is an in-house cutter, where as with bench-made custom, the cutter is off-site, so does not meet the client.

i know it is confusing, but as i have read your blog, there seem to be no middle ground between MTM and bespoke. if that is the case, where does ‘bench-made custom’ place? it is definitely not MTM as the garment is not made from a pre existing block/pattern.

your informed opinion shall be greatly appreciated

It is only in the US that phrases such as benchmade or custom are used. Elsewhere, benchmade is really only used to refer to shoes.

There are gradations between MTM and bespoke, eg when you don’t meet the cutter, or when an existing pattern is substantially altered (more relevant with shoes), but generally it’s easy to differentiate the two – and your description is of bespoke, not MTM

The “bespoke” suit Logsdail made for me was unremarkable except for its high price tag. The suit was also outsourced which I didn’t appreciate. Perhaps, more lucrative customers like Larry Kudlow get the full in-house treatment. I don’t even think I still have the suit. Logsdail does have a charming English accent but the overall experience was less than charming.

I agree about Logsdail being over priced. I have never been there but live in nyc and used to have garments made at Fioravanti when I was in my teens. I stopped once I had some of my late European fathers clothing altered. Even those much older garments that were not made for me were f higher quality and more stylish. As for Logsdail my mother was remarried to nyc guy who had clothes made by him and the suits did not look good to me.