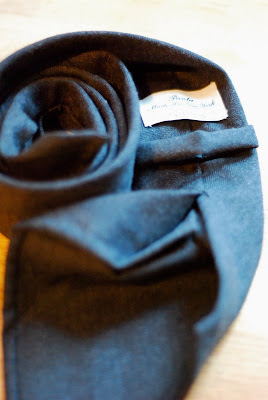 Ed Morel over at new New York company Panta has started making ties as part of his offering (see prevous post on his superb trousers here) and I received a couple last week.

Though the ties are made in New York, they all use English silks and wools. They are six fold and, depending on the fabric, are either unlined or very lightly lined. The tie is handsewn and finishes in an excess length of thread – a length, which is secured in one side of the tail, rather than a loop. A slightly different technique to finishing the loose tacking up the middle, but no less effective.
I’m a big fan of the charcoal wool you can see here, which I think works particularly well in an unlined six-fold. I’m less keen on the silks unlined, but that’s just a personal thing – generally I prefer ones with a little heft.
Initial pricing is $99. Once the website is set up and running (still a week or two away), the full price will be $119-$129.
I also received a further pair of Panta’s trousers, which Ed has altered from the first model slightly by using a softer and thicker shirt cotton in the waistband.
Until the site is ready, Ed can be reached at [email protected]. More shots of the collection can be seen at this Style Forum thread here. 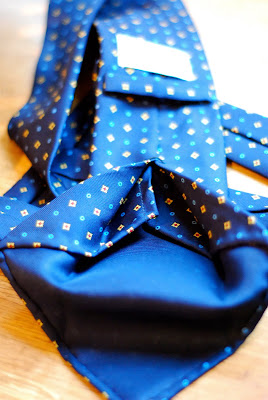 Your blog is really excellent. It inspires the readers who has that great desire to lead a better and happier life. Thanks for sharing this information and hope to read more from you.